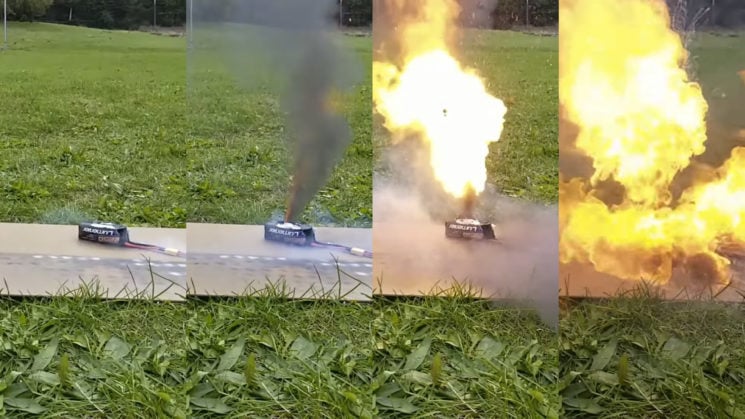 It might’ve escaped your notice, but it’s Christmas. Yesterday was Christmas day, in fact, and lots of people received all kinds of shiny new photography and video related gifts powered by LiPo batteries. You might have even received one yourself, or already own one. Drones, portable strobes, speedlights and all kinds of creative gadgets are powered by LiPo batteries these days, even the phones in our pockets.

You might remember Samsung’s somewhat public battery failure with the Galaxy Note 7, leading to the invention of batteries with built-in fire extinguishers. But most people still aren’t aware of the kind of dangers LiPo batteries can pose. In the real world, exploding LiPo batteries are rare, but when they do, it’s in grand fashion. But there are ways to minimise the risks.

This morning I read a post on Facebook which read that this person’s Godox AD600 battery had exploded inside his car. When it went, it took his Sony A7R, 24-70mm GM lens and a chunk of the car’s interior along with it. It turned out, he’d dropped the battery while at the beach and it had come into contact with salt water. It stopped working so he put it in his car. Being the conductive mass of wetness that salt water is, this shorted out the battery, eventually leading to a meltdown.

It’s not something that most equipment manufacturers really list as a consequence of doing something they tell you to not do. Although it’s not really their responsibility to. The instructions for the unit do actually say to not get the battery wet, but not why. Being told to not do something is enough for some people. But now this person knows why.

As I said, in reality, such explosions are rare. Most consumer LiPo powered products contain all kinds of circuitry to prevent things that cause batteries to explode. Commercially available drones such as the DJI Mavic and Phantom, for example, use batteries which contain electronics to minimise these risk. This is why they cost so much money. 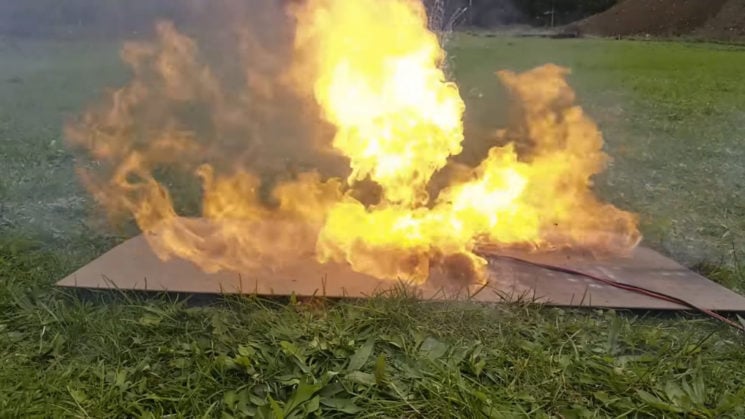 DIY drone builders, and many other RC hobbyists, though, use batteries that don’t contain these electronics. The chargers they use with these batteries do, instead, and you can override those safety measures as they’re designed to work with many different types of batteries. The users learn how and why to safely charge, discharge and store batteries. The risks associated with LiPo batteries are common knowledge in that world. To the point where there are many products available to help in the event of exploding batteries.

While there are a number of causes which can lead a LiPo battery to explode, this video from FliteTest demonstrates one of the most reliable ways to force one. That is overcharging the battery. The point is to demonstrate how to contain the explosions somewhat safely.

First, they show a “naked” LiPo battery overcharging and exploding. Then they show these same batteries inside two different protective enclosures. The first is the Bat Safe. Then the humble and inexpensive LiPo bag (you can also get large ones for multiple batteries).

Again, such explosions in consumer products are rare in the real world, but they do happen. Common causes are typically water, as happened in the account I read this morning, and accidental punctures that don’t necessarily cause an immediate reaction.

Leaving them at a full charge, or completely discharged for lengthy periods of time can also cause potential issues. This can cause the batteries to expand, reducing their charge, and the electronic protection circuits aren’t always reliable anymore, so, overcharging can occur. This is why drone batteries often have a “Storage charge” mode.

The Bat Safe and LiPo bags aren’t the only options, but get something. Keeping batteries inside some kind of real protection while charging, storing or travelling can greatly reduce the risk if they explode. And if anything happens that might put your battery at risk, if it hasn’t already exploded, put it inside something safe, just in case.

Sure, your battery will still be toast, along with whatever you’re storing it in, but at least you reduce the risk of burning your house down or destroying equipment in your car.

And for those who think I’m just being paranoid, I have about a dozen large LiPo batteries here. I use them to power everything from drones to LEDs to DSLRs. They’re well cared for, charged and stored appropriately, and none have ever exploded, but I know that it can happen. I charge them safely where if they do explode, they’ll damage nothing but themselves.

Think of LiPo bags and other protection like insurance. The same way you might for your car. Just because you haven’t had a crash yet doesn’t mean you never will, and you’ll want to have insurance when that day comes.

How I use my drone Lipo batteries to power cameras, lights and other things

« Start culling your photos for a more effective portfolio
The rise of the machines: Google’s AI will decide if your photos are aesthetically pleasing »