Bottles are always a fun and challenging photography experiment, especially ones that contain crystal clear liquids like vodka. I don’t buy vodka often and when I do, it rarely tends to stay full long enough to have any time in front of the camera, but Dustin at Workphlo has definitely put some thought into photographing this one using some low budget kit and very interesting techniques.

If you’ve watched Dustin’s videos before, you’ll know he’s a fan of compositing when it comes to product photography. And this particular technique pretty much requires it as he cuts paper to act as reflectors on just small sections of the bottle’s label.

Dustin uses very little gear in his videos. Typically only a speedlight or two and maybe a softbox or a reflector. And while many of Dustin’s videos show a lot of similar techniques, implemented in different ways in order to help provide a better understanding of how and why they work, this is something I haven’t seen before from Dustin. Here, he uses two pieces of white paper, taped together with a notch cut out to go around the bottle’s neck to act as a reflector on the label on the front of the bottle. 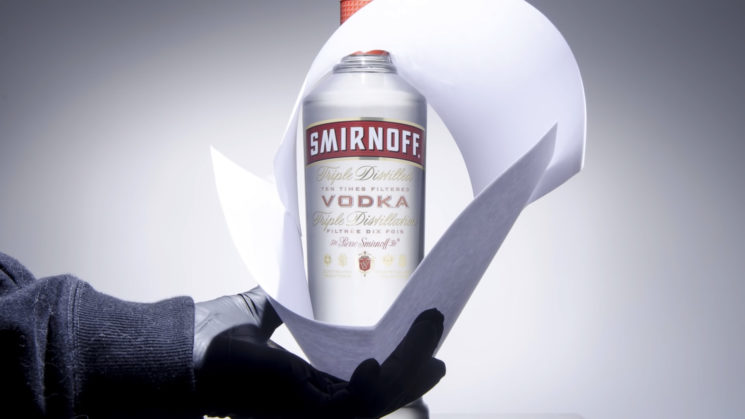 Dustin doesn’t use all of this image in his final composite, but it allows him to very quickly and easily paint in the brand’s logo on top of other images where the bottle itself is lit more clearly.

It’s impossible lighting, really. The paper acting as a reflector has to be in that exact spot in order to do its job. But we can’t see it in the final image, and we can’t see the effect it’s having on other parts of the bottle, because they’re not included in the final result.

It’s interesting to wonder when we see product photography in magazines and advertisements, just how many might have been created in this way, with lighting that just can’t exist in the real world, rather than as a single lit shot.

Could Dustin have pulled this off in a single shot? Quite possibly, but it’d require a lot more equipment than he used, and probably more time to tweak the lighting setup than Dustin ended up spending in Photoshop to composite the multiple individual shots together.

Shoots like this are usually win-win, though. Whether you get the images you want or not, you’ve still got a bottle of vodka at the end of it to either commiserate or celebrate.

IP ratings and what they mean to your gear. Camera makers, please be clear!