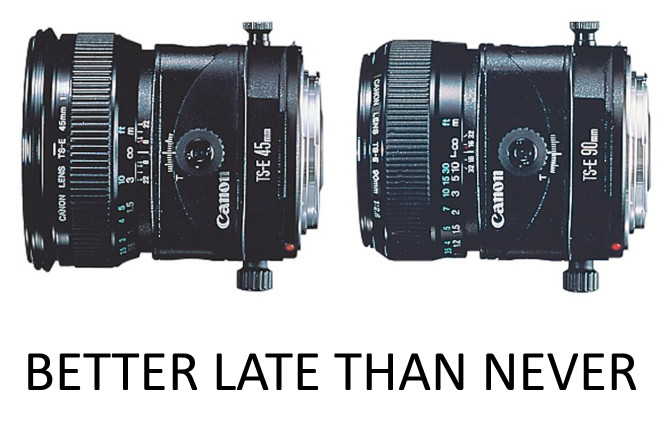 According to the latest Rumors, Canon will be updating its ancient tilt-shift lenses, as well as update its first f/2.8 zoom lens in two and a half years.

The production of these lenses, as well as their release, could be delayed due to the high demand of Canon’s recently released lenses as well as matters that are not in the company’s control.

The 16-35mm f/2.8L II was released in 2007, which automatically makes it a prime candidate for being updated. This is said to happen “in the next year”, according to Canon Rumors.

The lens, which will be the first f/2.8 zoom updated since the 24-70 f/2.8L II, is said to include a slight change in its focal length with 15-35mm being suggested by the source.

Previous versions of this lens were 20-35mm and then 17-35mm, so it won’t be surprising if the iteration following the 16-35mm will be a bit wider.

If true, Canon will have a killer set of wide angle zoom full frame lenses, consisting of the 11-24mm, the new 16-35mm and the 24-70mm, with two of them having an f/2.8 aperture and at least two of them being designed with 50MP+ sensors in mind.

Perhaps in less demand but more in need of an update are Canons old tilt-shift lenses. Both the TS-E45mm and the TS-E90mm were released in 1991 making them 24 years old. That is almost unimaginable in today’s digital photography market.

The replacement of these lenses is said to have been prioritized by Canon, probably as they could be the ideal lenses for the new megapixel kings, the 5DS and 5DS R.

Both CR and Northlight Images seem to think that we won’t get to see the new lenses this year, but tilt-shift users have waited for so long that I’m sure they won’t mind waiting another year.

While the production of the 16-35mm (or 15-35mm) is not likely to happen anytime soon due to the manufacturing demands of the 100-400mm IS II and the 11-24mm lenses, the introduction of the new tilt-shift lenses is being limited by the low supply of the high-end glass types used for top-of-the-line lenses.

Watch a timelapse of craftsman replacing a Canon 6D shutter