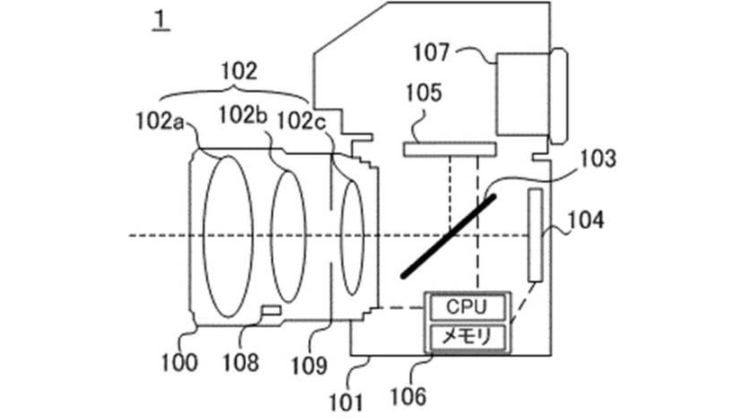 A Canon patent has been discovered by the folks at Canon News showing what appears to be a camera with a “translucent mirror” reminiscent of Sony’s SLT cameras. But that appears to be where the similarity ends, as the Canon implements a whole second image sensor, which appears to help overcome dynamic range issues with existing cameras.

The purpose of the translucent mirror is essentially the same as with Sony cameras. It allows the image to both pass through to a main sensor as well as bounce off to something else. In the case of Sony that reflection bounced off to a phase-detection autofocus sensor, whereas here the reflected image goes into a second image sensor.

The goal, according to the patent is to provide dual imaging for things like HDR. You hit the shutter, and both sensors capture an image at different exposure levels simultaneously. Quite a handy feature for shooting HDR of moving subjects. This potentially increases the dynamic range for video, too, as the two could shoot at different ISO levels in order to extend the shadow and highlight detail captured in the resulting footage.

There are other potential implications for such a configuration, too. As Canon News points out, another problem it can help to solve is exposure bracketing. If you’re shooting a 5 shot bracket, with each shot 2 stops apart, assuming your base exposure for the scene is 1 second, your shortest exposure would be 1/15th of a second while your longest would be 15 seconds. In theory, one sensor could be shooting your long 15-second exposure while the other is shooting the rest. Effectively, this would cut your overall shooting time in half for each set of bracketed images you make.

Or, instead of the existing dual ISO technology we’re currently seeing in a number of cameras, this could be extended to have the one sensor optimised specifically for shooting at those higher ISOs, improving the quality in low light while the other is optimised for high-resolution detail. It almost feels like a leaf out of the smartphone camera playbook.

As with all patents, whether or not this will actually happen is anybody’s guess, and it’s unlikely we’ll see it come in the EOS R form factor. The whole point of the EOS R product line is to remove the mirrors, so there just isn’t room for one. Whether it’ll be the next evolution of Canon’s DSLRs, though, a hybrid of sorts is a possibility, though.