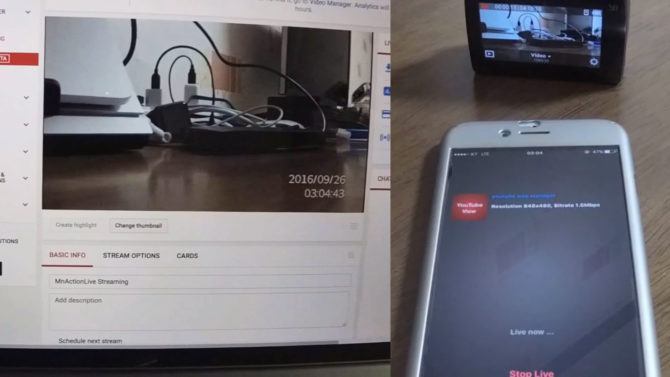 The Yi 4K is a pretty great camera already, especially for what it costs. Yi, however, did something pretty unique with the Yi 4K. When they released the new camera, they also announced that it would come with an Open API. While most aren’t able to take advantage of this, what it does do is allow developers the opportunity to talk directly to the hardware and create custom apps for the Yi 4K.

Thanks to the Yi Open API, Mn_nH now brin us one of the features that a lot of Yi 4K users have been begging for. You can now stream your Yi 4K camera directly to YouTube and Facebook through a new iOS app. Not only can it send live to these servers, but it seems that it can stream to both of them simultaneously.

For a quick introduction to how the app works, Mn_nH have provided a video showing how to set it up.

They also have a sample video showing the quality of a 1440p stream as it’s being broadcast live to YouTube.

I have to say, it’s pretty impressive, and something very few other cameras allow you to do. Even the official YouTube app for iOS doesn’t let you live stream.

This is why the Yi 4K action camera’s Open API was such a fantastic idea. It’s why hacking the original Yi HD was so popular. It’s why CHDK and MagicLantern have also become such a huge hit with Canon cameras. Opening up their hardware to software developers is something that I really hope catches on with other manufacturers. It’s unlikely, but I can still hope.

Most of the companies who manufacture cameras are great at hardware. They excel at the hardware. Whether they make it entirely themselves, or source the best components from third parties. In fact, it’s virtually impossible to buy a camera these days that can’t shoot a great photo in the right hands.

Where most fail, though, is in the software. Archaic menu systems can take an age to sift through. Even modern cameras with touch screen interfaces often quickly show a lack of understanding when it comes to a touch driven user experience. Sometimes, it’s not just the interface, but limitations placed in the software. Manufacturers don’t always know what their consumers want, and so don’t write the software to give it to them.

It’s not that we want to “hack” our cameras. We just want to be able to fully utilise the hardware they contain. There are features now that we’ve simply come to expect from certain types of camera. When we know the hardware can do it, it’s very frustrating to find out that the software won’t let us.

At the moment, the app is only available for iOS. Mn_nH say they have no plans to release an Android version, but state that there are other teams out there working on one.

You can download the app here on Apple App Store, and you can find out more information on the Mn_nH website.

What do you think? Is streaming straight from an action camera something you’d do? Are you usually too far away from a decent signal when using your action cameras anyway? Or do you just prefer to shoot and then edit later? Let us know in the comments.