Like so many, I desperately fear public speaking. I physically shake and mentally crumble. I’ve always been a better writer than a speaker with so much to say and no way to say it. So when The Photography Show approached me last October asking if I’d like to talk about my precious Dreamcatcher Project to a large audience on stage…of course I said “yes please” with a confident smile…and then cried for a month whilst quivering in a corner with fear! 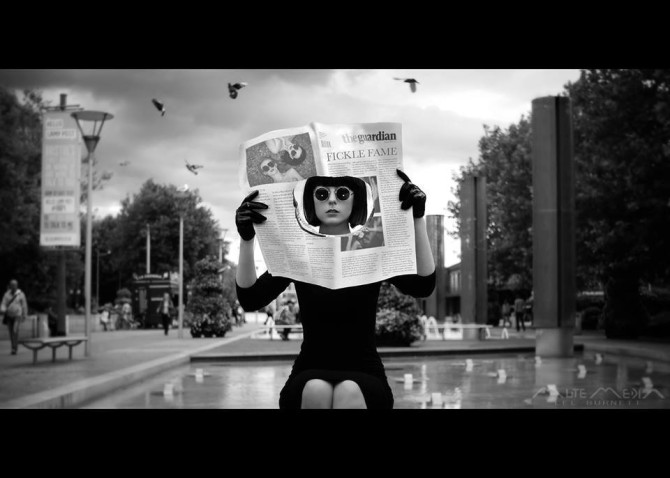 So how can it be that a model; a person who spends her life in front of a camera; is so terrified of walking out in front of a bunch of people and being asked to speak? Well, it’s quite simple: I am the muted mannequin.

As a model I am not required to talk nor am I expected to show outward judgement, personal expression or opinions. Of course I am expected to bring those elements of my personality into a shoot as directed by the theme of the images, but I am to predominantly use my body alone to project them. I am a blank canvas, a clothes horse and therefore a mannequin. 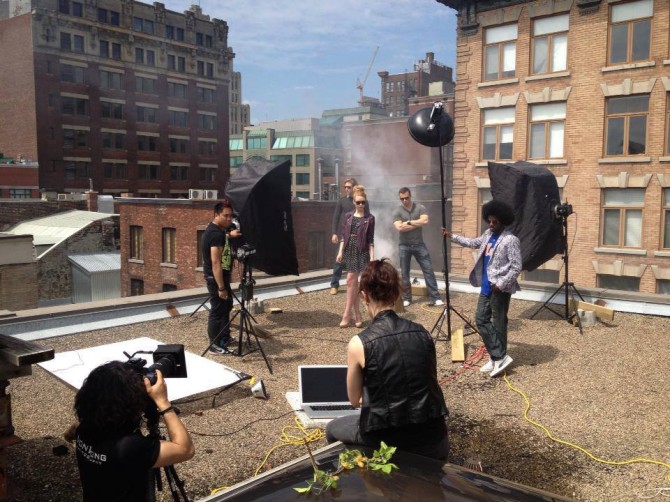 Behind the scenes, unafraid of the camera shooting with Von Wong in Canada

I felt like someone who didn’t deserve to be given such an opportunity on stage – someone who has achieved nothing in terms of great skill or learnt craft that so many fine photographers spend their lives perfecting. I’m just me. No superstar hero nor charismatic busty blonde with 5 foot legs and perfect pearly whites. No, I’m just…me. Me who understands light and posing and how to make myself look best in a frame.

“The impostor syndrome, sometimes called impostor phenomenon or fraud syndrome, is a psychological phenomenon in which people are unable to internalise their accomplishments. Despite external evidence of their competence, those with the syndrome remain convinced that they are frauds and do not deserve the success they have achieved. Proof of success is dismissed as luck, timing, or as a result of deceiving others into thinking they are more intelligent and competent than they believe themselves to be.”

The world was about to discover the real me and I was convinced they wouldn’t like what they’d see. I wrote my script for the show, which strangely fell out of me with ease and I was as prepared as they come on paper. Still pulling my hair out about what was ahead, I purchased a self help guide called ‘Taming Your Public Speaking Monkeys’. The book made a lot of sense explaining where my faults focused. Speaking too fast, worrying I won’t say the right thing before I’ve spoken and getting mind blanks when my brain backtracks to check if I’ve said words correctly – these were all problems.

I realized that all I needed was the confidence in myself to believe in all that I was saying, in order to speak without falter. I could be a mannequin with a voice and I began to train my brain, telling myself that as long as I was passionate about what was saying, then it was a failsafe plan. I had my notes, I had my plan and although I had nothing technical to teach, what I did have is a story that says anything is possible and may encourage others to do the same.

When we arrived I was instantly in work mode, donning that professional model smile and that calm, collected persona, whilst all the while my feet were paddling furiously beneath the surface. I was publicly speaking in 3…2…1…. 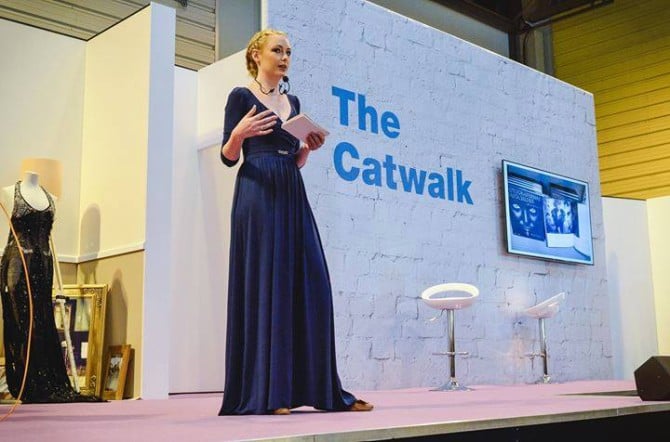 It was 3:32pm when I was beckoned out from the wings onto the stage. I took a deep breath and told my feet to walk. My jaw hit the ground under the bright lights and flashes of cameras amongst so many faces. The muted mannequin was no more as I opened my mouth and started to speak.

In what felt like no time at all, it was all over. I’d done it. I’d survived! I’d conquered a fear and proven that everyone has a voice and a story worth telling to inspire. If I could do it; the model without a voice, then anybody can.

Climbing a mountain of personal fear is never an easy task to endure. In fact the pressure to prove that you are capable of success, is far more scary than anything else. But having done it for myself now, I know I can do it again. What triggered the change in me was only achievable by putting myself on that stage in that moment; taking a chance and biting fear hard.

Failure was never an option despite it being quite the possibility. I could have fallen apart in front of an audience and ruined my career in the space of thirty minutes, but it was an opportunity too good to waste and a risk that needed to be taken. Life is very much about taking those moments by the horns, taking yourself away from your comfort zone, believing and knowing that anything is possible when you push yourself to change.

Try, believe and risk…whilst you’re moving the rest of them will remain standing still.

Jen Brook is a creative fine art, conceptual and fashion model based in Preston, England. You can follow her Facebook here and her Twitter here. She writes in the same style over at Tumblr, so make sure you give it a visit.