One of the things that I love about creating stock photography is that it gives me an incentive to create very artistic and polished photographs of my own family.

I have been shooting for Stocksy for nearly a year now, and a sizable portion of my portfolio are photos of family members – to steal a line from Chase Jarvis:

“The best model is the one you have with you”

When I look back on my portfolio, I see a whole year of family photos that are completely different than the snapshots I would normally take.

In this article, I am going to share a few of the stories behind some of my favorite family photos. 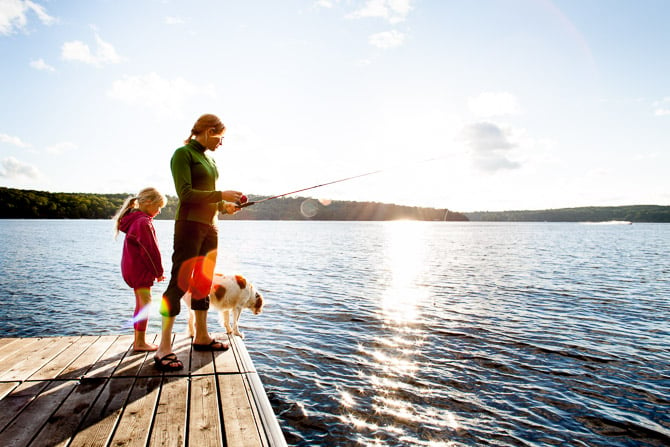 The lead photo is my wife and daughter fishing off of the dock at a friends cottage last summer.  This was one of those lazy August cottage long weekends that involve elaborate breakfasts that last until 2:00, afternoons drinking beer on the dock and homemade barbeque burgers and board games at night.

This photo is my highest grossing and most downloaded stock photo.  This scene didn’t exactly happen by accident (you can read more about what went into it here) but I really like how the beautiful light and the natural activity of fishing off the dock at dusk came together – and our friend’s dog looking for a fish to chomp helped too. 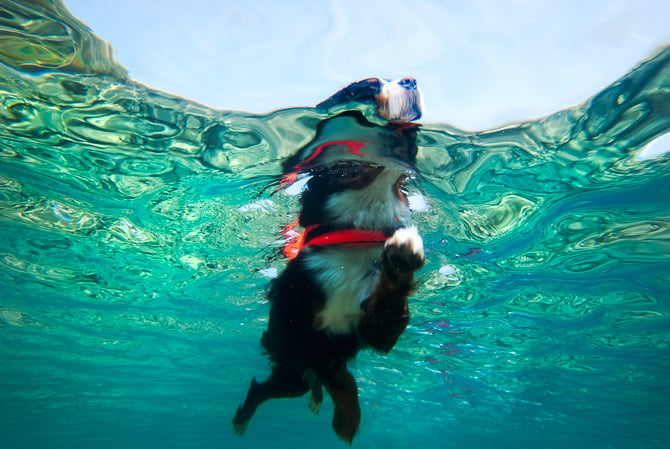 This is our big ol’ Bernese Mountain Dog Daisy going for a swim in the lake up at our family cottage.  I had my camera down at the beach in an EWA Marine underwater camera housing to take pictures of the kids swimming, but it was too cold for them, so I took pictures of the dog instead.

We had to put Daisy down last year because of health problems, and this is one of my favorite photos of her.  At the time this photo was taken, she couldn’t walk on land anymore, but in the water she would just paddle around in lazy circles.  I like to think that you can see that sense of regal freedom on her face (but of course I am just anthropomorphizing).

It is totally random that there is a perfectly calm spot so you can see her face above water, but I think that quirk makes the picture. 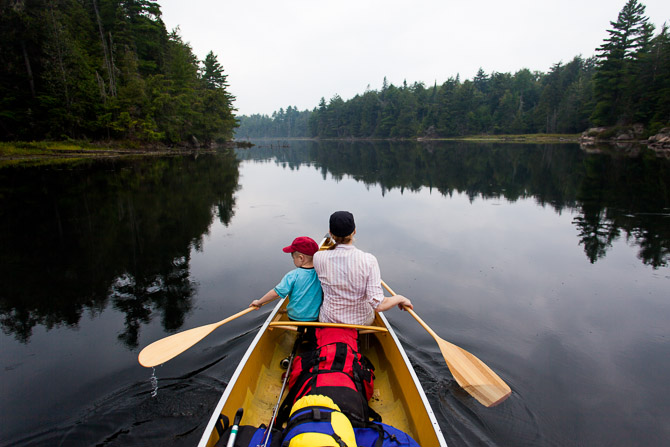 This photo is from our big family end-of-summer backcountry canoe trip to Algonquin Provincial Park last summer.  As the designated stern paddler, I snapped this photo with a 20mm lens early in the morning on our last day, paddling out.  It doesn’t look like it, but this was actually a very tricky photo to take.

First, I had to stand up in the stern to get this perspective (which is not the easiest or smartest thing to do in a canoe).

Then, I had to time the shot just right to get both paddles in the air before my wife turned around and yelled at me for not paddling and for standing up.

What I really like about this photo is how calm and idyllic it is – because about an hour after this picture was taken, the wind picked up to over 30 knots (i.e. really, really windy) and we were paddling as hard as we could for 4k across a big lake right into the wind and waves. 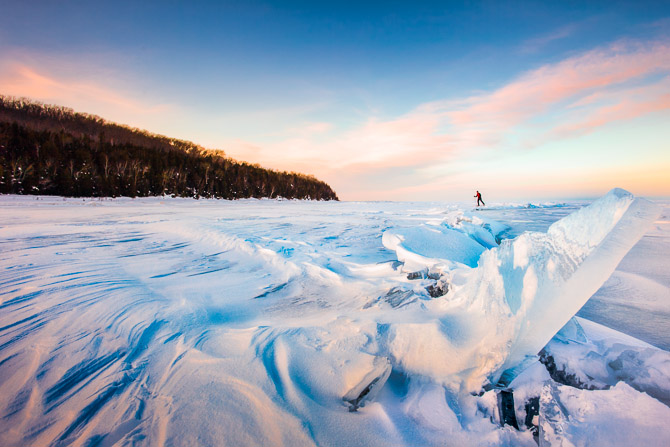 This one’s a selfie!

I was out on the lake ice this winter shooting some time lapse for the DIY Actobotics slider demo, and all of a sudden there was this amazing evening winter light that I couldn’t let go to waste.

Now at this point, I had been out on the ice most of the afternoon and I was absolutely freezing and looking forward to some Scotch in front of the fire.

Oh, and all that cool broken and heaved ice in the foreground, that’s because this is a pressure crack in the ice, so I had to be very careful about where I was stepping.

But, none the less, I pointed the camera in the right direction, programmed it to shoot at 5 second intervals and skied around for another half hour – without a hat or a coat on because the hat and coat I had with me didn’t match the style I wanted for the finished photo.  Although, in the end I liked this shot the best and you can’t even tell what I’m wearing. 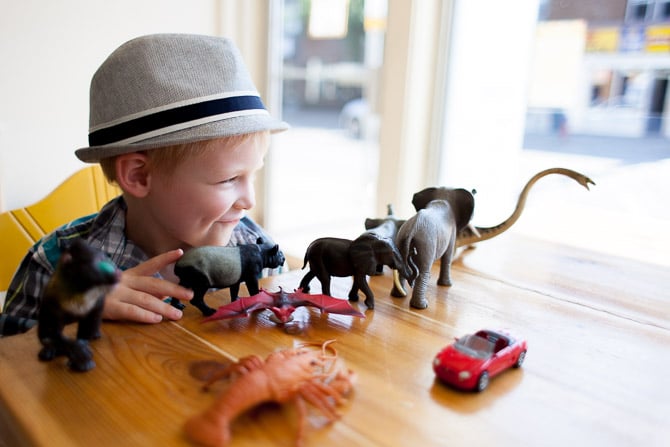 This is one of my most downloaded stock photos.  This is really just a quick snapshot of my son that I took last fall in a funky little coffee shop while we were waiting for our waffles to be served.

There was great light coming in from the big front window and for some reason he decided that he wanted to wear a fedora and nice logo free shirt that day, plus the fact that this particular hipster coffee shop had non-branded kids toys available – everything just seems to work together. 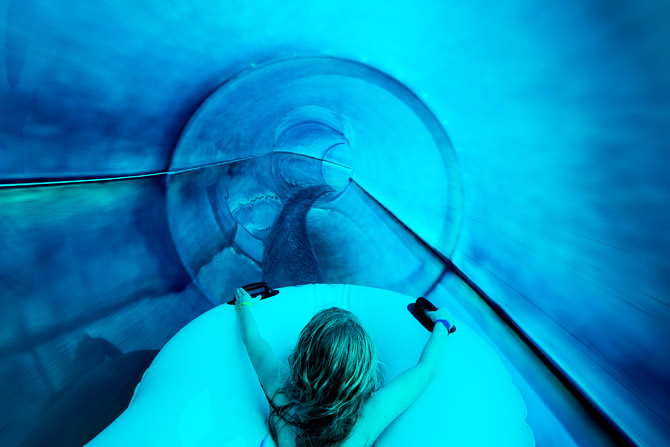 This is a photo of my daughter on a giant water slide that I took on a weekend family getaway last year.  I knew we were going to a water park, and I had it in my head that a few shots inside the water slide might be kind of cool, so I brought a wide angle lens and my waterproof camera housing just in case.

Taking this photo involved slightly bullying the poor teenage lifeguard to let me go down the water slide with a giant camera in an apparently scary looking (and possibly breakable) housing.

It also involved contorting myself to precariously sit sideways in the tube behind my daughter so that my big hairy legs weren’t in the frame – which resulted in me falling out of the tube and sliding down on my rear on at least two occasions. 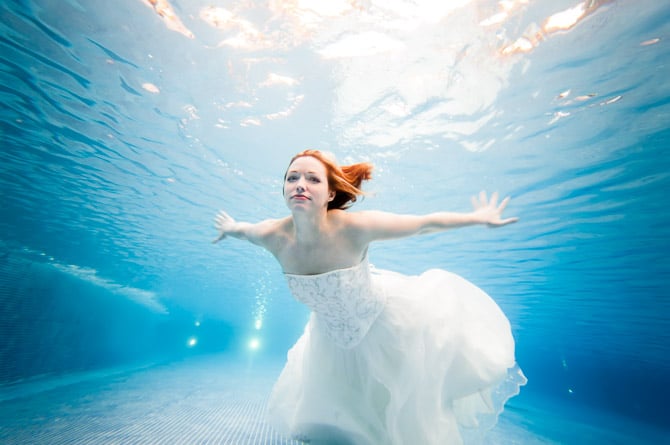 This is my wife on vacation for our 10 year anniversary in the Dominican Republic last winter.  Back when we got married, trash the dress wasn’t even a thing – so we packed up her humungous wedding dress and took it on vacation with us.

It was a ton of fun shooting our own trash the dress session.  We jumped in the pool about an hour after the resort staff closed it for the day, but because Dawn was wearing her wedding dress, they assumed we were newlyweds and left us alone.

Even better, other guests who were watching from their rooms surrounding the pool also assumed we were newlyweds and started bringing us drinks!

The point I wanted to make here is that although each of these photos each have a unique story that seems serendipitous, none of them are simple snapshots that happened by accident.

Overall, I am really enjoying slowing down and concentrating on only creating a handful of very good family photos, instead of the usual trap of taking thousands of mediocre snapshots of nothing in particular for no particular reason.

Are Awesome Family Photos Worth Slowing Down For?

How do you approach family photography?

Is it better to have just a few really good family photos, or is it more important to document everything?

Can you put your camera away if there is bad light, a bad background, poor clothing – or do you still shoot a thousand photos and hope for the best?