We received a nifty little Actobotics slider kit from ServoCity and over the winter I had the opportunity to shoot a mix of live action and cell phone time lapse video and also a little bit of GoPro video with the slider.

In this post I am going to review the Actobotics slider as a tool for creating movement in both live action video and GoPro or cell phone time lapse video.

Actobotics is a modular building system of machined aluminum channel, brackets, mounts, motors, gears and other components that are designed to be assembled to create mechanized robots, vehicles and other machines.  All of the components are precision made and very high quality.  The components are also surprisingly affordable. 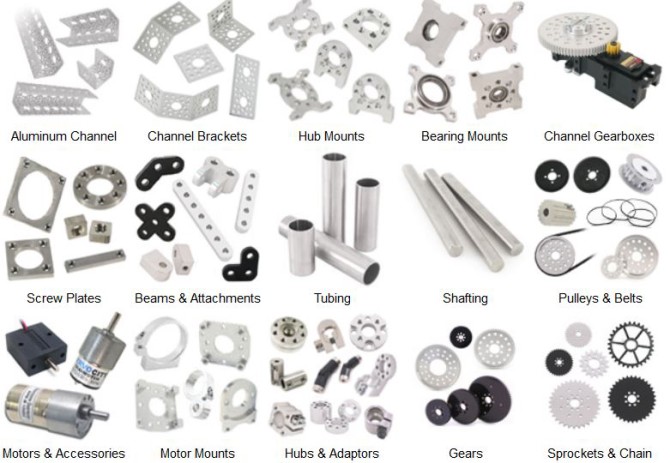 Its kind of like a really cool Meccano set for adults (assuming of course that you are old enough to remember Meccano!)

I would call the Actobotics Slider Kit a semi-DIY slider.

The Actobotics components are definitely more geared towards robotics hobbists than photographers, and even with the Slider Kit A there is still a certain amount of DIY involved, not to mention assembling the components.  But, if you can follow the instructions to build a Lego spaceship, you shouldn’t have too much trouble assembling the slider kit. 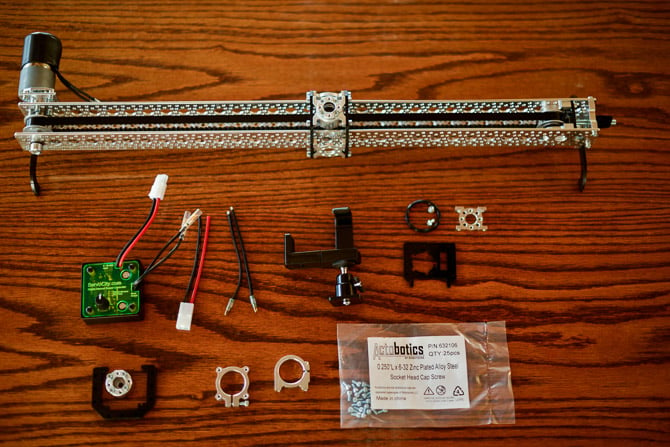 I should also note that although it is referred to as a Slider Kit – the kit does not contain all of the components necessary to build a functional robotic slider – you have to mix and match a few extra Actobotics components to complete the setup.

Because there are so many Actobotics pieces and components available, I found it somewhat overwhelming to figure out the specific parts needed to build a photography and video slider.  Fortunately, the Actobotics staff were very helpful in selecting everything that was needed.

Here is a list of the Actobotics parts that I used to build my cell phone time lapse video and GoPro slider:

To that list, I would also add a 12V battery tray with a plug end (I used my Dynamic Perception dolly’s 12V Li-Ion battery and a DIY plug end made out of a cigarette lighter adapter). 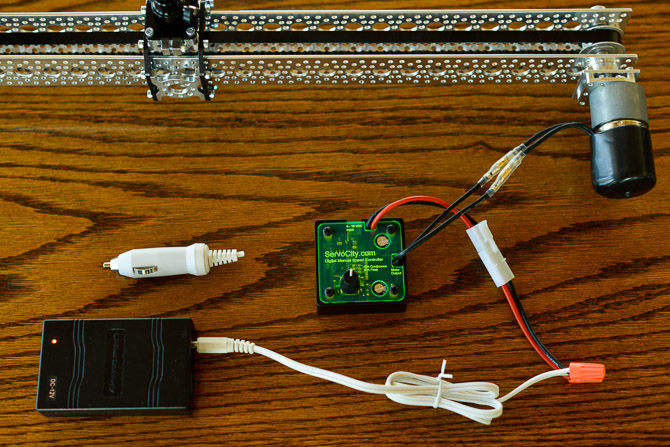 If you don’t want to use the GoPro mount, you can just used the mini-ball head that came with the Phone Mount, together with a standard GoPro tripod mount.  But if you do want to use the Actobotics GoPro mount, order an extra 1/4″ Screw Plate and 1/2″ Thick Aluminum Hub Spacer so that you can also use a tripod (see below). 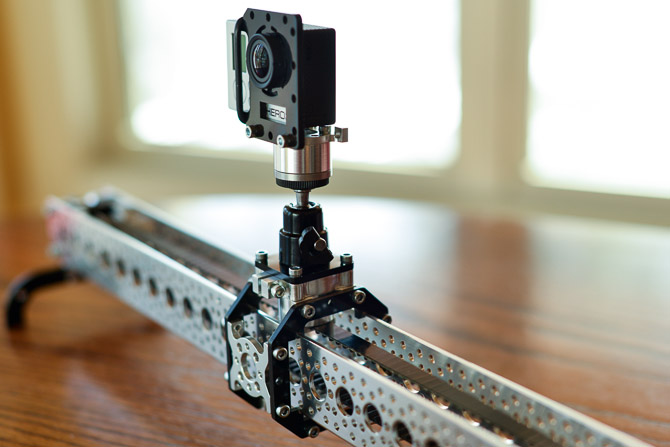 The Slider Kit A comes pre-assembled in a “Channel Slider A” configuration.  Channel Slider A components wrap all the way around the channel to allow the slider to carry heavier loads like a DSLR.  The problem is that you cannot add a tripod mount to the bottom of the slider, so you can only use the little feet that the slider comes with – which is not very practical. 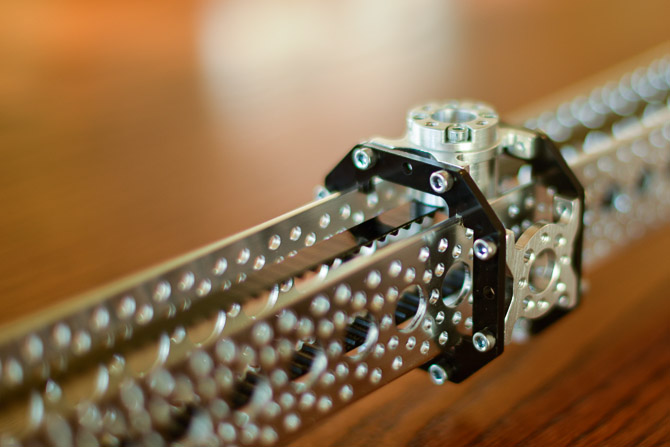 I think a much more usable solution is to go with a “Channel Slider B” configuration, which is U-shaped and allows for a tripod mount on the bottom of the slider channel.

The entire slider assembly is small and light enough to be mounted on a single tripod using the 1/4″ screw plate and a 1/2″ thick aluminum hub spacer – but you can only add a tripod mount if you use the Channel Slider B configuration. 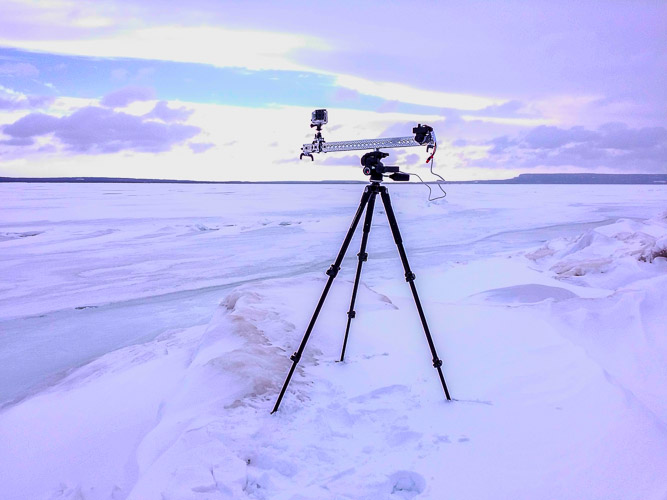 Actobotics Slider and GoPro on a Tripod

I used the mini-ball head that comes with the Phone Mount to mount my cell phone and a GoPro with no problems.

However, one issue to note is that the Actobotics Phone Mount is specifically made for an iPhone.  If you have a different size phone (like my giant Galaxy Note III), your phone will not fit.  I used elastic bands to secure my phone to the Phone Mount, which was a bit of a pain but worked out ok. 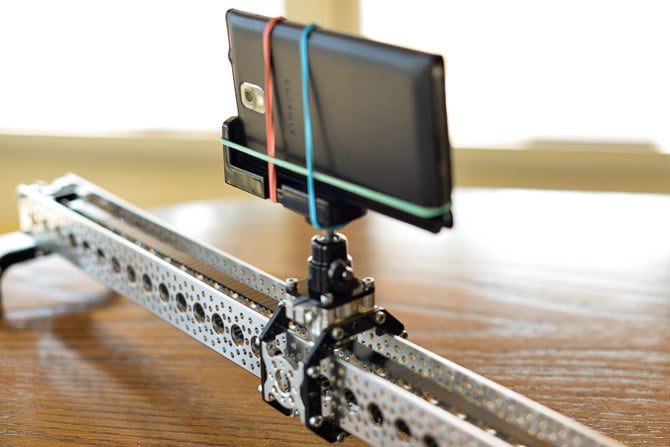 Cell Phone Mount with Galaxy Note III (Made for iPhone)

Actobotics advertises that you can use a full size DSLR with the “Channel Slider A” configuration, but by the time you add a full size ball head and the weight of a DSLR and lens, I think it would be pretty tricky to get stable video out of that configuration (more on video quality later). 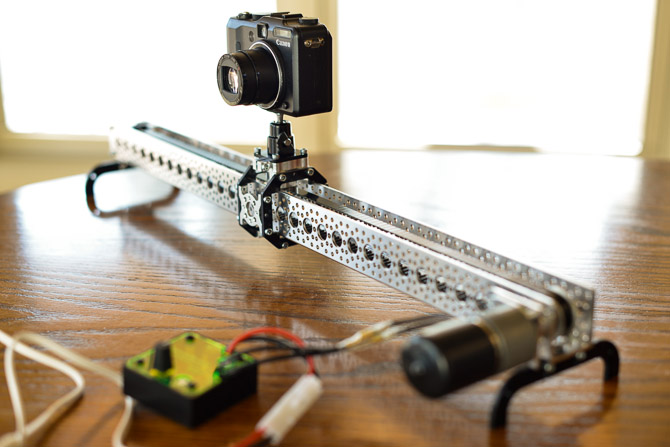 I used the 20 RPM Precision gear motor for both the time lapse and live action video sample footage.

At full speed, it takes the dolly just over 18 seconds to travel the 19″ slider run – or about 1″ per second.  This is a nice steady travel time for live action video.

However, I think it would probably be more versatile to use the 45 RPM gear motor for live action video because you would have the option to film dolly moves that are a little faster and a little slower than the maximum speed of the 20 RPM motor.

For live action video, I found the slider moves to be generally nice and smooth, but because the entire system is so light, I did find that it was susceptible to camera shake by very minor jitter of the slider and camera – so you have to be very careful that the system is entirely stable and obstruction free for the entire slider run.

You can see a little camera shake in some of the sample video clips.  Normally, a little camera shake can be fixed in post by using Warp Stabilizer, but because the slider movements were a little slower than I would have liked (with the 20 RPM motor), I also had to do some time remapping, which cannot be applied together with Warp Stabilizer (you have to choose one or the other – I chose to make the clips faster). 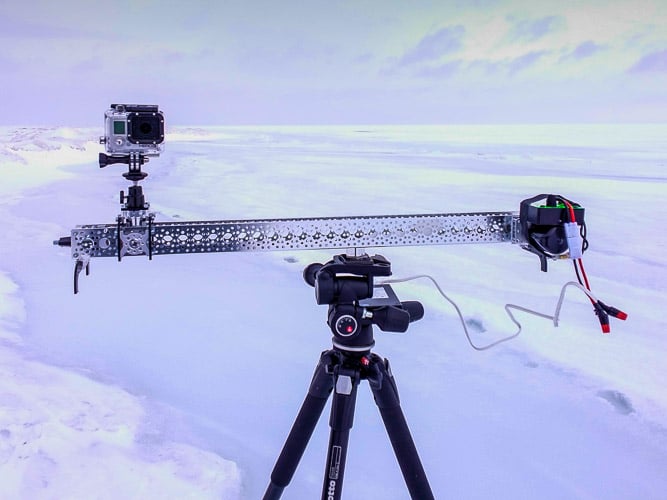 With the 20 RPM motor, at minimum speed it took the dolly about 150 seconds to travel the 19″ slider run – about 1″ every 8 seconds.  This means that the maximum length of time lapse that you can film with the 20 RPM motor is only about two and a half minutes – which is not nearly long enough.  At just 1 frame per second (which is barely time lapse), and 30 frames per second, you’ll only end up with about 5 seconds of finished time lapse video.

One problem that I noticed trying to run a faster motor at minimum speed by setting the speed with the speed controller was that the sled did not move at a constant speed.  It tended to move faster at the beginning and then slow down as the slider run progressed.

Having a slider that moves at a constant speed is critical for time lapse video.  In the sample time lapse sequences, you can see that the motion is not constant – and it took a lot of Timewarp adjustments to even get it that close.  (I would have also preferred them to be longer, but that’s the best I could do with the 20 RPM motor).

I think that the motor needs to run at at least 1/4 power to have a steady progression, so for time lapse video, I would use the slowest motor available – 0.5 RPM.

I should also point out that control of the Actobotics slider is fully manual – there is no movement ramping or shoot-move-shoot (interleave) capabilities.

Without movement ramping, starts and stops are pretty abrupt and need to be cut out of the final clips.

Without shoot-move-shoot movement, you are restricted to only filming in good light.  Of course, if you are filming with a cell phone or a GoPro, you will only be working in good light anyway.

There is also no auto stop – so you have to make sure that you manually stop the motor at the end of each run – although you could mount a kill switch to either end. 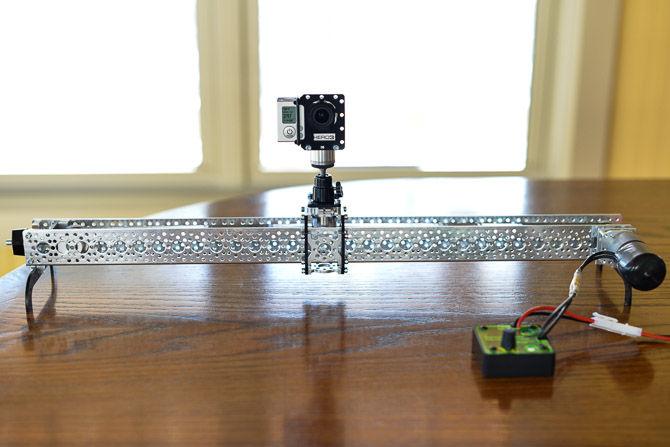 In this article, I don’t want to get into the specifics of how to actually make cell phone time lapse video or GoPro time lapse video, I will follow that up in a future article.

However, for the cell phone time lapse video sample footage at the beginning of this article, I used a Samsung Galaxy Note III mobile phone with the Camera FV-5 app.  The sunset time lapse footage was taken on a GoPro, and the through the ice live action clip was also filmed with a GoPro.

(I never though that I would be interested in filming cell phone time lapse video, but I am actually really happy and a little surprised with how well the footage turned out!)

Overall, I found the Actobotics Slider to be a very handy tool for adding motion to both live action video and time lapse video – it is small, lightweight and easy to use.

As far as sliders go, if you are only using a small camera, like a cell phone, GoPro or a point and shoot, the Actobotics Slider works very well and is very cost effective when compared to commercially available sliders.

19″ of travel may seem like too short for cinematic moves, but I found that as long as I had a good foreground element, 19″ was just enough to introduce an interesting level of movement for short clips.

I do not think that you would get very good results with a full size DSLR on the Actobotics Slider – although a small DSLR, like a Nikon D3300 and 18-55 kit lens (or similar from Canon), or a mirrorless system would probably work ok.

To be an effective tool, I would go with the 45 RPM motor for live action video and the 0.5 RPM motor for time lapse, instead of trying to use a single motor for everything.

One final thing that has piqued my imagination is the idea of adding a robotic cart with wheels to the slider – imagine how great a setup like this would be for elaborate hyperlapse movements! 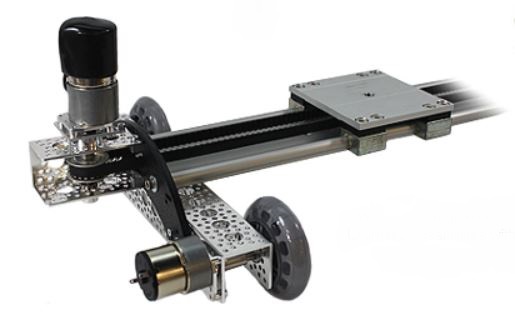 Would a small, lightweight slider like this fit into your photography and video workflow?

Would you ever consider working with just a GoPro, cell phone or point and shoot – or is a full size DSLR a minimum requirement?

« Truth in Advertising Act: A Bill That Wants to Regulate Photoshop in Advertisements
Google Declares War On Vertical Video »