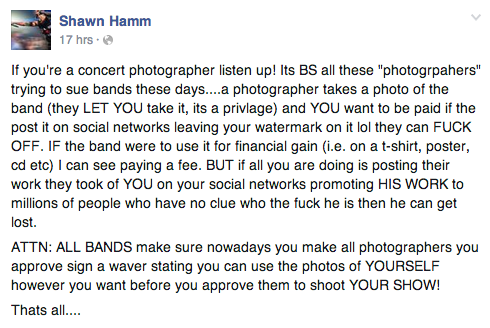 Two days ago, controversy was bred after a clash over social media between photographer Rohan Anderson and the pop-punk band Red Jumpsuit Apparatus; the band began a crusade of defamation against Rohan after being called out for posting his picture up without permission or credit. In return, Rohan sparked a wave of protest from the online community by posting the entire story online, and publicity for The Red Jumpsuit Apparatus expectedly took a plunge.

Now that the story’s been gaining widespread coverage over the online photography and music community, the tour manager for the band Three Days Grace decided to weigh in on the topic.

Shawn Hamm, a tour manager for Three Days Grace since back in 2008 before Life Starts Now was released, took to Facebook and Twitter to make the following post concerning concert photographers:

“If you’re a concert photographer listen up! Its BS all these ‘photogrpahers’ trying to sue bands these days….a photographer takes a photo of the band (they LET YOU take it, its a privlage) and YOU want to be paid if the post it on social networks leaving your watermark on it lol they can FUCK OFF. IF the band were to use it for financial gain (i.e. on a t-shirt, poster, cd etc) I can see paying a fee. BUT if all you are doing is posting their work they took of YOU on your social networks promoting HIS WORK to millions of people who have no clue who the fuck he is then he can get lost.

ATTN: ALL BANDS make sure nowadays you make all photographers you approve sign a waver stating you can use the photos of YOURSELF however you want before you approve them to shoot YOUR SHOW!

The words come off heavy, but he also made a few statements in the comments on the post as well, where he addresses that there should be watermarks and credits given if a band decided to post another person’s photo. The post did get put up within two days of the controversy with the Red Jumpsuit Apparatus, but Shawn Hamm claims that a photographer messaged Three Days Grace confronting them about a photo by him posted up without permission; the credit and watermark, however, were still there. So it’s at least clear that Shawn is coming from a more reasonable side than whoever was writing for RJA.

Where he really hits hard is in declaring that photographers should feel honored and privileged if a band ever uses their photography, with or without payment.

He reasons this through arguing that when photographers come to the band and ask to take concert photos, the band does them a favor by “giving them tickets and a photopass to shoot a national act for their resume.”

When countered against with the argument of whether Three Days Grace’s music should be free, Shawn had this to say:

This comment pointed out two things. The first is that Shawn doesn’t know much about copyright law. Just because a photo is taken of someone doesn’t mean they’re legally entitled to use it however they want. If that was the case, then wedding, senior portrait, and event photographers are out of the business.

The second is that he doesn’t understand photography in general. Music is an art form, and you have to create it. Photography is the same exact way. Your subject is the instrument. Not every way you shoot him or her is going to come out the same way. In music, you have to play a set of notes for your guitar to matter; in photography, you have to do the same thing with the person in the photo. That’s where the difference comes between someone being photographed artistically, and someone being photographed for a county jail mugshot. You’re creating the image you’re seeing with the scenery you have. The way Stanley Kubrick photographs a person is completely different from the way David Fincher photographs a person.

And that kind of creation deserves just as much royalty as any music record does.

After going through everything he said, I think it’s important to say that we shouldn’t outright dismiss Shawn’s post. As a guy who manages bands for a living, he’s going to defend them. The problem is how he presented his arguments.

I absolutely agree that photographers shouldn’t expect much of a payment if they were given permission to shoot those shows with benefits like free passes. In a sign of mutual respect, letting the band use the photos with credit would definitely be the good thing to do. But if a photographer’s there on professional terms, meaning someone from their company had to pay for the passes for them to be able to shoot, then Shawn can’t use that argument at all.

As for bands posting photos, even with watermarks, and getting backlash, Shawn needs to understand that most of the time those people are just looking for respect at the end of the day. It doesn’t come down to legality at that point; it comes down to courtesy. If you’re using someone’s photo, you at least let them know of what’s happening before you do it. It’s the professional thing to do, and it saves a lot of trouble in the end. But telling those photographers to “FUCK OFF” isn’t the right way to approach them either.