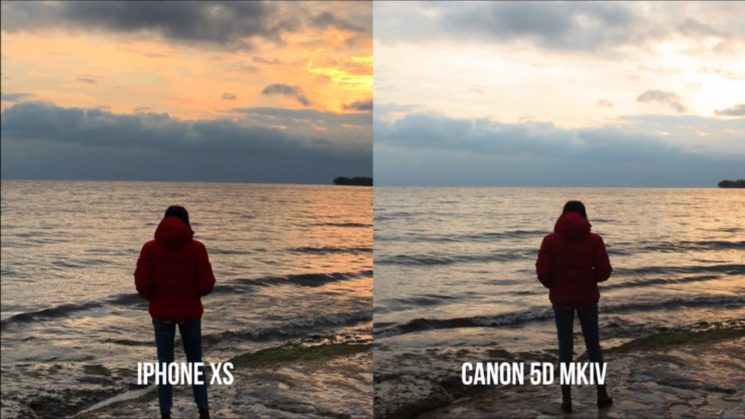 We are witnessing the rapid improvement of smartphone cameras (and more of them being added to each new phone that gets launched). But have we come to the point where smartphone cameras can take better photos than full-frame DSLRs? Tyler Stalman tested the iPhone XR against the Canon 5D Mark IV. And when it comes to dynamic range – the smartphone sure does a pretty impressive job!

Smartphones and DSLRs have been compared numerous times, and they’re evidently getting better. For example, Jolyon Ralph was pretty impressed by Huawei P20 Pro smartphone compared to the Canon 5DSR. In Tyler’s video above, you can see how Smart HDR in the iPhone XS and XR performs. According to Tyler, it’s “doing crazy things with dynamic range.” And indeed, photos straight out of camera preserve a lot of detail in smartphone photos when Smart HDR is on.

On the other hand, there are some situations when the Smart HDS feature overdoes it. It ends up creating the end result that looks rather unrealistic. Still, in most cases of Tyler’s test, the smartphone SOOC shots are pretty impressive when it comes to dynamic range.

There’s no doubt that computational photography is on the rise, developing incredibly fast. But still, I believe that dedicated cameras are still optically better than smartphones, and will continue to be. Allen Murabayashi discusses this in one of his articles, and you can read it here. Still, when it comes to the dynamic range, do you think that the iPhone XR has outperformed the Canon 5D Mark IV?