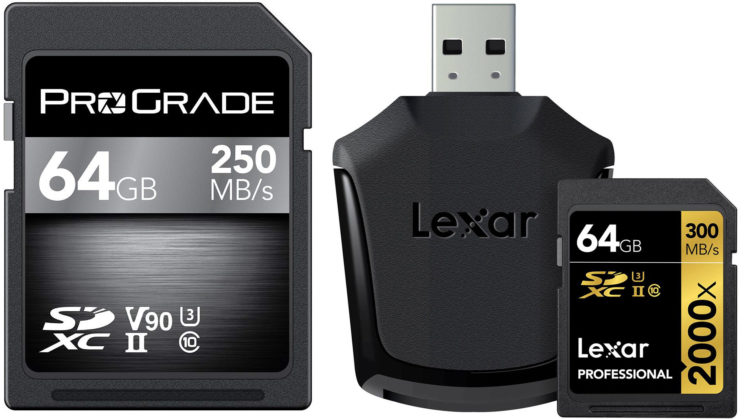 The SD card market seems to be hotting up, and getting pretty competitive (and fast!). With Lexar seemingly back, ProGrade taking square aim at the high-end market, and SanDisk & Sony releasing new cards boasting big numbers like there’s no tomorrow, who really is the fastest these days?

That’s what the folks at Camera Memory Speed wanted to find out when they tested 113 different UHS-I and UHS-II SD cards to find out which is the fastest in the Canon EOS R mirrorless camera.

As cameras get more demanding with higher resolutions for stills and high bitrate codecs for video, faster cards have become a must. New standards are coming out all the time, and the SD card standards are already a couple of generations ahead of what actually exists today to prepare for the future. But what about now?

While this test was specifically with the Canon EOS R, chances are you’ll see similar results in other cameras, too. At least, other cameras that have UHS-II slots. If your camera is UHS-I then you’re going to be limited by the card slot’s speed, no matter which card you use. But looking at the results, it seems Lexar and ProGrade are on top with, perhaps surprisingly, Adata.

Rather interesting to see that the fifth fastest card is actually a microSD card sitting inside an adapter. Makes me curious to see how ProGrade’s new UHS-II microSD cards would’ve compared had they been available for this test. Of course, they’re rated to V60 (60MB/sec sustained). That being said, the Lexar Professional 1800x microSD cards are only guaranteed to U3, which is a minimum sustained write speed of a mere 30MB/sec. And they ranked #5.

While the single card slot will undoubtedly put a few people off, this should give EOS R owners some peace of mind when picking which memory cards to use, at least in terms of speed. I think when it comes to reliability, Lexar will have to prove themselves all over again, as it’s essentially a completely new company with new products brandishing the Lexar name.

ProGrade, for me at least, have already proven themselves to be very reliable. I started switching over from SanDisk to ProGrade about 6 months ago, and I’ve put them through every “this’ll probably corrupt the card” test I can think of and they’ve behaved flawlessly. I’d still back them up in the field if I were using a single slot camera, though, just to be safe.

Check out the full comparison here. What cards do you have? How do they measure up?

« Can iPhone XR take better photos than a $5,000 full-frame Canon?
This Halloween costume is a fully functional Nikon camera »