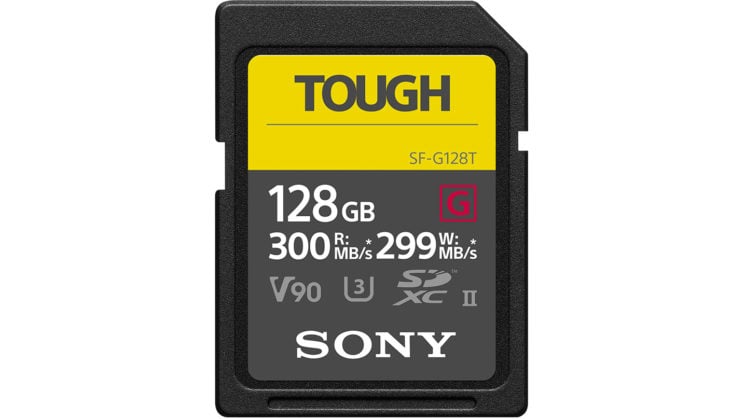 One of the biggest failings off SD cards is their physical durability. SD cards falling apart is a probably bigger cause of death and image loss than file corruption. Sony plans to fix that with a new line of SF-G series “Tough” SD cards.

The new cards directly address some flaws in the standard SD card design that’s been around since day one. Namely, the write protection tab (have any of you EVER used that?) and the two-part manufacture of the plastic casing, that can easily split apart.

To correct this, Sony have done away with the write protection tab completely, so that the card is always in read/write mode. They’ve also switched from a two-part casing to a single one-piece mould that has no seam to split.

Sony says that the new SF-G cards are “18x bend proof” compared to previous SD cards, drop-proof to five metres, as well as dust and waterproof to an IP68 rating. That means they should survive just about any exposure to dust or water you could throw at it. They are also X-ray proof, magnet proof, anti-static and temperature proof.

Exactly what “temperature proof” means, I don’t know, but it’s plastic, so it will have a melting point. I expect it’s outside of the range SD cards typically find themselves subject to.

As far a speed, they keep up with Sony’s previous SF-G UHS-II SD cards launched at the beginning of last year. That means 300MB/sec read speeds and 299MB/sec write speeds. But these new cards are also V90 certified for 90MB/sec sustained write speeds when shooting video.

I never understood the point of the write protection tab. I mean, I got the point of it, it was to write protect the SD card, heh. I just never really understood why anybody thought it was useful on an SD card. Using it always seemed to just shorten the life of the SD card due to mechanical failure in my experience. The tab would pop out, and the card would essentially become useless.

So, it’s nice to see that particular leftover from the days of 3.5″ floppy disks (where it was actually kinda useful) is finally starting to disappear.

The new SF-G Tough series cards will launch in October across Europe in capacities of 32GB, 64GB and 128GB. No word on prices yet, or when they’ll be available in other regions. But if you want to find out more, head over to the Sony website.