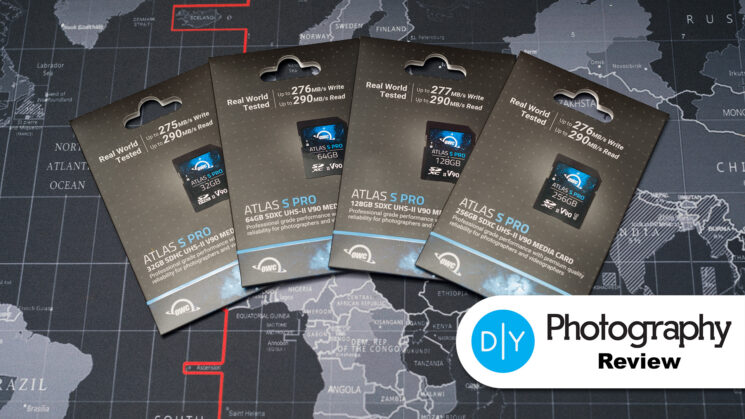 In January, OWC announced their new Atlas S Pro V90 UHS-II SD Cards, available in 32GB, 64GB, 128GB and 256GB capacities. They’re priced very competitively, too – that is to say, they’re less expensive than many of their V90 competitors but still a little more expensive than V60 UHS-II cards.

We’ve found in the past from some manufacturers that different capacities of memory cards, even from within the same product line, can often provide different read and write speeds, so we asked OWC to send us one of each capacity to test and compare with each other. 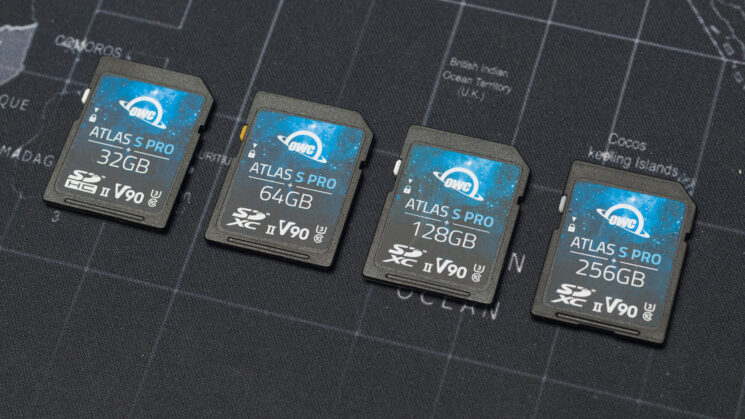 We’ve spent the last couple of weeks putting the cards through some real-world use inside actual cameras. That means Nikons for stills and Panasonics for video. There’s not much to report in this aspect. They behaved pretty much as one would expect. Buffers cleared quickly when shooting stills and the cards were never found to be too slow with video for the kind of footage we were shooting. Admittedly, we weren’t able to max out the in-camera write speeds all that much as our output speed was limited by the max 400Mbps footage on the Panasonic GH5. 400Mbps can be handled just fine by V60 cards, so the OWC V90 cards also all handled it as easily without breaking a sweat.

As well as the speed claims, OWC also boasts up to 10x the endurance of competing cards, with up to 10x as much total data written before the cards die out. This particular claim wasn’t really possible to test without killing a bunch of cards to see where they fell over, so the long term durability tests will have to wait. We’ll update this post if and when one dies. If we haven’t told you that one’s died yet by the time you’re reading this, then you can safely assume they’re all still working just fine.

I’m using the ProGrade Digital CompactFlash and UHS-II SD card reader for these tests for reasons that will become apparent in a future article. But the short version is that when it comes to speed, the memory card reader you choose matters just as much as the memory card speed itself. And the ProGrade reader appears to be the fastest reader I have for these cards. I tested five different card readers from Lexar, SanDisk, Hoodman and even OWC’s own UHS-II USB hub but the ProGrade reader came up on top and the most consistent speeds from one test to the next with each card I tried from a number of different brands when plugged into the USB 3.2 Gen 2 Type-C USB socket on my ASUS ZenBook Pro. So, that’s the one I used. 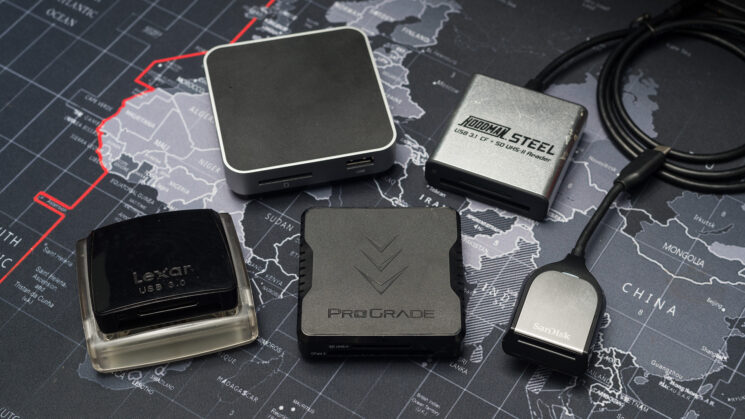 As mentioned, OWC sent us all four capacities of Atlas S Pro V90 cards to test out so that we can see if the speed is consistent throughout the range. We’ve seen in the past that there can be some variability between different capacities in a product line, so we wanted to see the results first-hand. OWC does note some very slight differences on the packaging with their own real-world tests showing 290MB/sec read speed across the board and between 275-277MB/sec for the write speed.

For each card, we ran the speed test five times using AJA System Test to give us an idea of consistency and to provide an overall average across multiple tests. This is the same process we’ve used in the past with the SanDisk and Silicon Power 1TB microSD cards as it tends to offer the most stable and reliable results. I’ve added photos of the packaging above each of the charts to show the OWC’s own advertised max speed test claims for each of the four capacities. 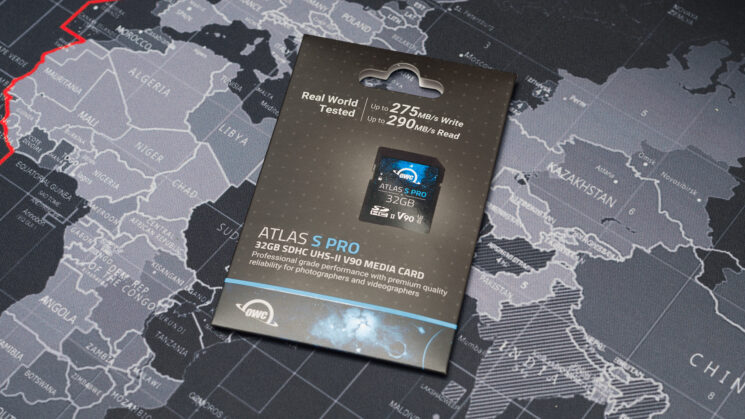 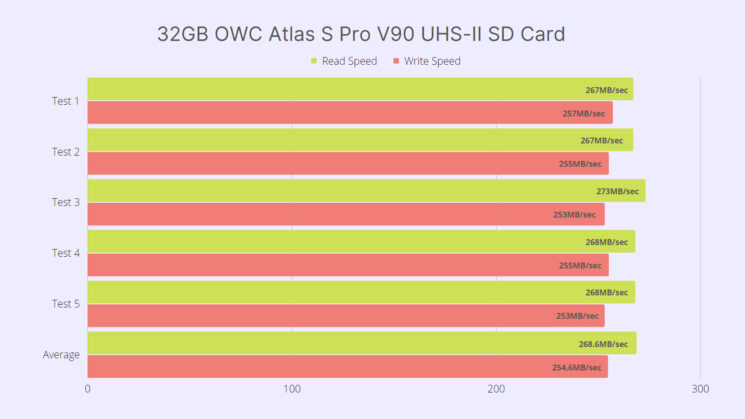 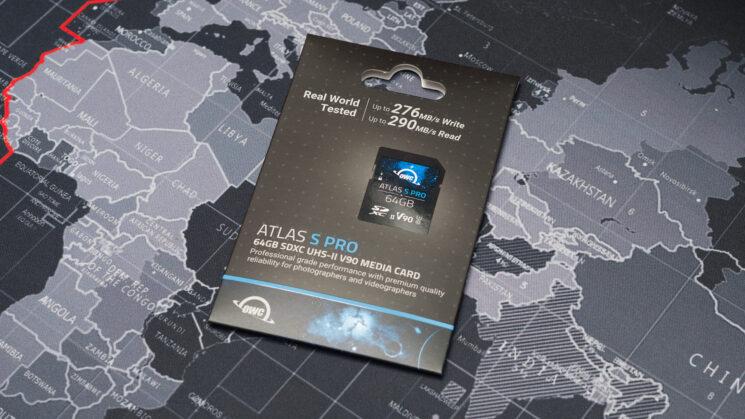 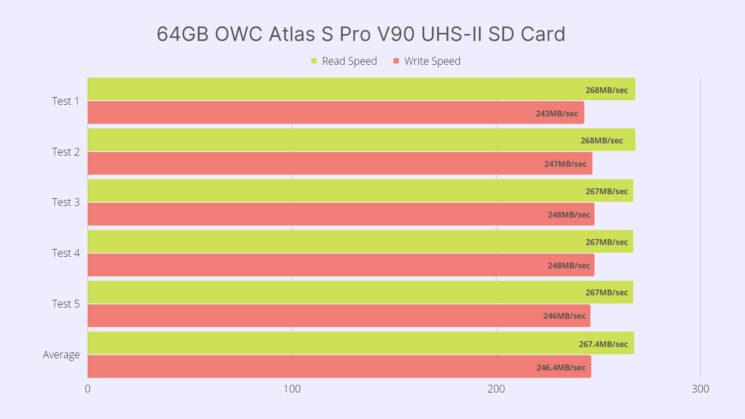 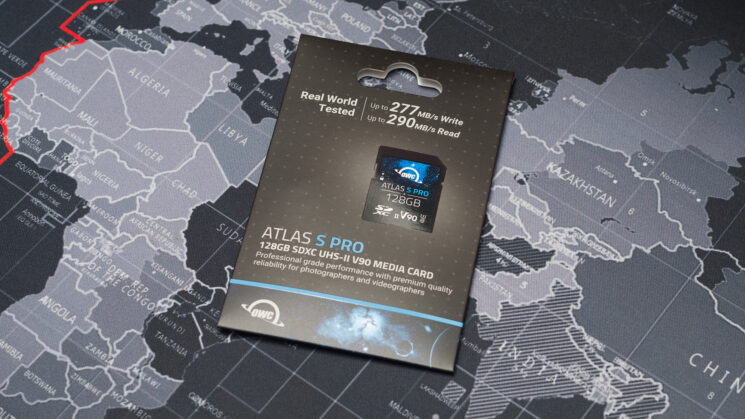 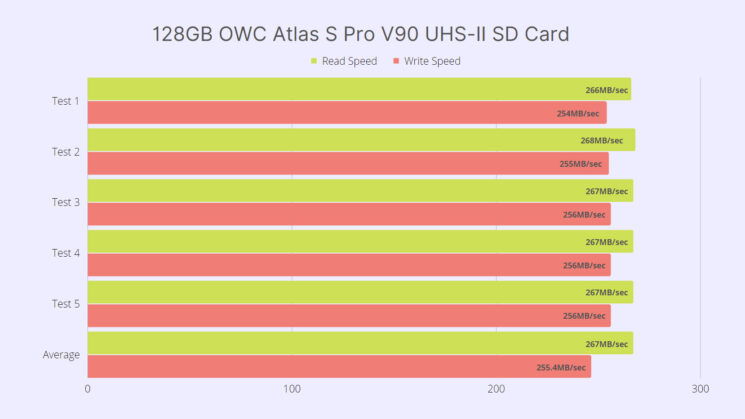 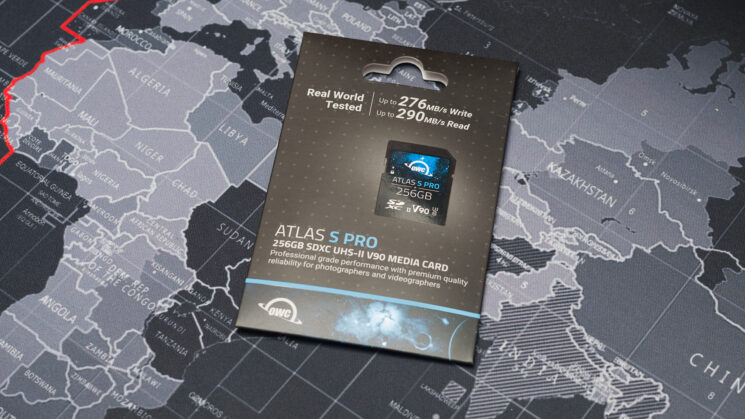 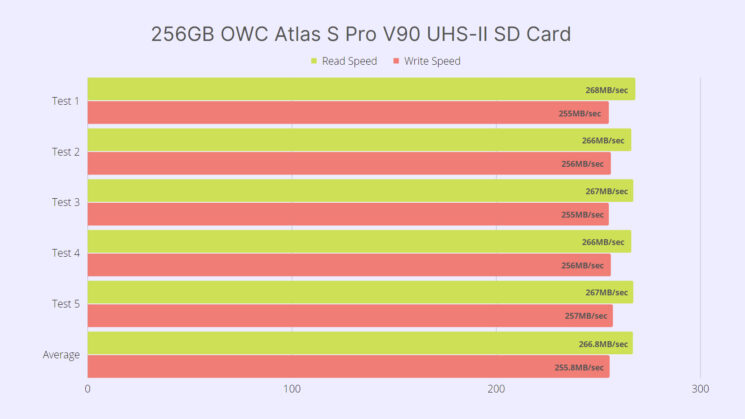 As you can see, the results don’t quite meet the highest speed claims of OWC, although they’re still very fast and far exceed the V90 specification. I wouldn’t hesitate to use these in any camera that required a V90 card, from a speed standpoint. As far as longevity and reliability… OWC says that they have very high endurance, with over 29,000 total full-card write cycles, thanks to their use of pseudo-Single-Level Cell (pSLC) technology – which claims 10x higher endurance than standard SD cards. But, only time will tell. All I can say for now is that these have behaved perfectly for us in the time that we’ve been putting them through their paces so far.

As a side note, one thing I found quite shocking while doing these tests was the speed variability of UHS-II memory card readers. As mentioned above, I tried five different readers from well-known brands during the tests, with write speed results as low as 185MB/sec and as high as 260MB/sec on the same card depending on which reader I was using. For this reason, I don’t think we can really blame OWC if our own tests don’t quite match up with OWC’s tests. The card reader used definitely comes into play and (yes we do, see update below!) which reader OWC was using for their own “real-world tests” – it would be nice if memory card manufacturers could publish this information along with their speed claims so that we can all benefit from those speeds at home and not be crippled by our card readers. I need to do some more testing with all of these readers and different cards, but expect a post on this topic in the future!

Update: We now know what reader OWC was using, thanks to Kevin down in the comments who spotted this statement from OWC about their testing process…

While all of the cards performed a little below the advertised speeds printed on the packaging, they all performed quite consistently, although there was a slight dip in write speed on the 64GB capacity card for some reason. But a ~9MB/sec variance is only about a 3.6% deviation from the other three, which is pretty negligible at these speeds. Over an hour’s worth of transfers, it’s about an extra two minutes. 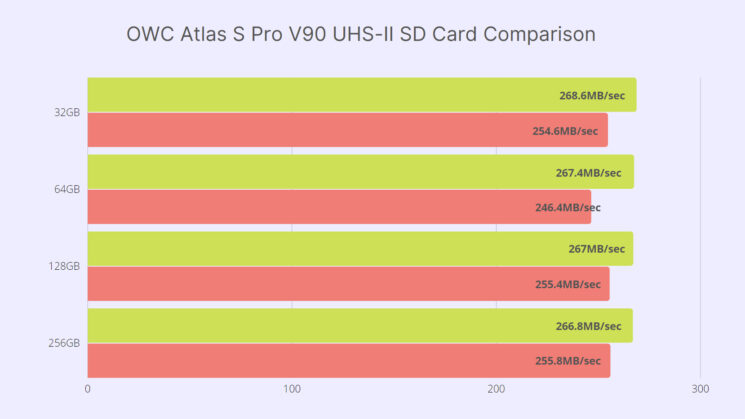 The average read and write speeds of all four capacities

Note: It’s also worth pointing out at this time that the 128GB ProGrade Digital V90 card in the same reader on the same USB 3.2 Gen 2 socket on the same computer gave average read & write speeds of only 248MB/sec and 220MB/sec respectively. This is significantly lower than all four OWC cards in this review, although also well above the V90 specification.

For many of us, that speed difference between V60 and V90 might not be important given the speeds that most of our cameras actually require right now. But with new cameras being released that demand more and more speed – particularly for high bitrate, high framerate video – V90 is going to be essential for some. And even if your camera doesn’t need it right now, unloading files from V90 cards to your computer is still going to be faster than unloading V60 cards. If you’ve got four or five cameras going simultaneously to cover multiple angles of an event, that can be a big time saver.

UHS-II cards are still quite expensive compared to their UHS-I counterparts, but they have come down in price a lot over the last couple of years. And while OWC’s UHS-II V90 cards might still seem a little expensive, sitting around $1 per gigabyte, compared to the UHS-II V60 cards available on the market today, they are at the lower end of the price range for UHS-II V90 cards with much of the competition costing 10-50% more for the same capacities.

If you need (or simply want) a V90 UHS-II card, the OWC cards are a solid contender. They easily meet and exceed the expectations required of the V90 specification, but do remember that if you want those max advertised read & write speeds when you’re using them on the computer, it will depend heavily on your card reader.

Sabrent and Wise announce world’s first 512GB V90 UHS-II SD cards but who will get them to market first?