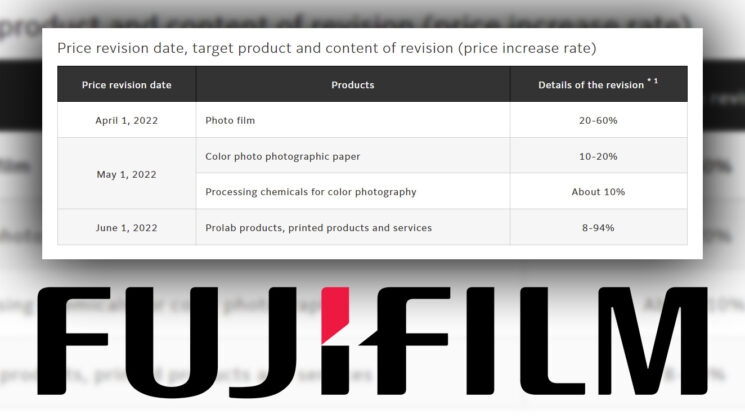 It looks like yesterday’s post about Fujifilm price increases has been confirmed directly by Fujifilm. A press release on the Fujifilm website, states that film prices have increased as of today from 20-60%, with more increases to come on paper, chemicals and lab products and services over the next two months.

They say that the price increase comes as a result of a recent rise in costs for raw materials, as well as transportation, and the decline in demand for photographic-related products. Perhaps this must just be a Fujifilm thing because film’s more popular now than it’s been in years.

Thank you for your continued patronage of FUJIFILM products.

Fujifilm Imaging Systems Co., Ltd. (Headquarters: Shinagawa-ku, Tokyo, President: Koji Matsumoto) responded to the recent rise in raw material prices, transportation costs, etc., as well as the decline in demand for photographic-related products. We have made every effort to absorb costs by improving production efficiency and reducing costs, but since it is difficult to absorb costs only by corporate efforts, we will revise the prices as follows.

We sincerely apologize for the inconvenience, but thank you for your patience.

We look forward to your continued patronage of Fujifilm products.

The only thing that isn’t mentioned in this release that was included in the photo posted to Twitter yesterday is the mention of Instax Mini products, which were set to see a 15% price increase on May 20th. Whether or not those will still see a price increase currently remains unclear. But yesterday’s Tweet did say that increase wasn’t supposed to be announced until May 10th while the others are dated for release on March 22nd. The press release on the Fujifilm website is dated March 25th.

So, we may still see those Instax price increases announced officially in a few weeks.

If your favourite Fujifilm film and Instax suppliers haven’t already reflected the increase in their prices, it might be wise to stock up now before they run out, or you’ll be spending more in a few weeks!

Want to own a print by Dr. Jane Goodall? Check out this charity print sale