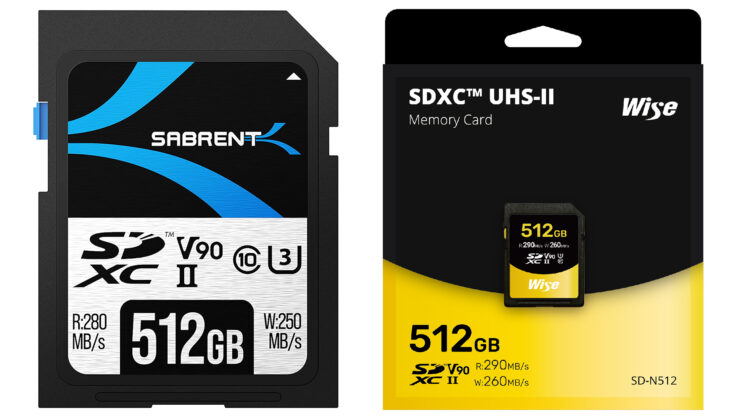 Manufacturers of memory cards, amongst other things, Wise and Sabrent have both announced their new 512GB V90 UHS-II SD cards, with write speeds guaranteed at a minimum of 90MB/sec. The Wise card was technically announced first, a couple of days before the Sabrent, although neither card is actually available just yet. There’s also quite a price discrepancy between the two.

The Wise 512GB V90 SD card is to be priced at $800, while the Sabrent is going to be $600. Not only is the Sabrent significantly cheaper than its only competition right now, they also believe they can get theirs to market and on sale first, with pre-orders already open and a release date of April 24th, 2022. Wise, however, is also expected to release in “mid-April”. So, the race is on.

Both cards meet the same technical specifications for V90, but with slightly different maximum read and write speeds, with the Wise card being a little faster with 290MB/sec and 260MB/sec speeds for read and write respectively. The Sabrent is only slightly slower, though, at 280MB/sec for read and 250MB/sec for write. These speeds are the maximums and are generally burst read and write, not sustained. The V90 specification only demands that the cards have a minimum sustained write speed of 90MB/sec (or around 720mbps).

In the real world, that maximum speed difference is going to make very little difference as both meet the V90 specification and should perform identically inside your camera. The only place you might notice a difference is inside your card reader. And even then, not all card readers are created equally and you can get wildly different read and write speeds with the same card in different readers (more on this topic coming in a future post).

And given that there’s a pretty massive $200 price difference between the two, I think many will opt to go for the very slightly slower card out of the two, assuming both stand up in the long term in terms of reliability.

Although 512GB and 1TB SD cards have been a thing for a while now, they’ve been UHS-I cards, with a relatively low V30 spec and max read/write speeds of around 95-100MB/sec (I’m not counting SanDisk’s proprietary hypothetical speeds that only three of their card readers can even do). The largest capacity UHS-II cards we could get before these two are 256GB.

With other manufacturers like OWC and Sony boasting faster speeds than either of these two, it will be interesting to see how the competition responds to these larger capacity cards. Some will no doubt carry full-on with CFexpress for larger capacities, but I expect we’ll see a few take up the charge with even larger UHS-II cards. After all, 1TB UHS-I cards are a thing and the extra speed of UHS-II V90 cards is arguably more important on such high capacity cards.

The Sabrent Rocket V90 512GB UHS-II SD cards are available to pre-order now for $599.99 and are expected to start shipping on April 24th. The Wise SD-N series V90 512GB UHS-II SD cards currently don’t seem to be available to pre-order anywhere yet, although they’ve expected to be priced at $800 and will be released in mid-April.