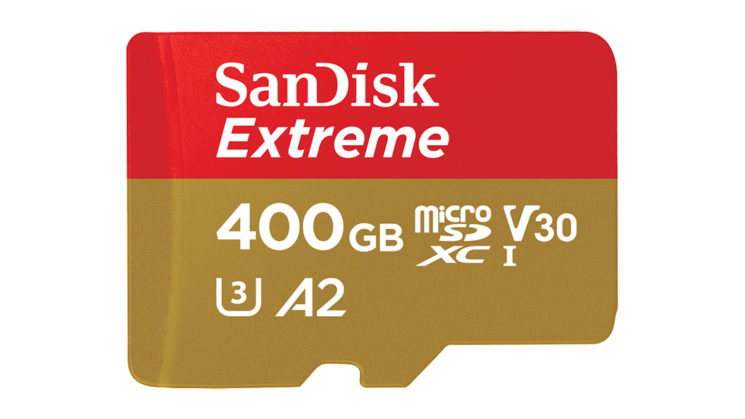 Announced at Mobile World Congress, SanDisk is pushing the limits again. After announcing the SanDisk Ultra 400GB microSD card only 6 months ago, they’ve now announced a new Extreme Pro version with read and write speeds of up to 160MB/sec and 90MB/sec respectively. And while support will vary depending on the device you’re using, it seems squarely aimed at video and VR/AR creators, offering V30, U3 and A2 speed guarantees.

It’s not the largest microSD card out there. That honour goes to the Integral 512GB microSD released last month. But this certainly seems to be the fastest that conforms to UHS-I spec. The U3 and V30 specs guarantee a minimum of 30MB/sec sustained sequential write speeds, so you shouldn’t have any glitches shooting footage anywhere up to 240mbps. The A2 specification offers 4,000 read and 2,000 write random IOPS, currently the highest “Application Performance” rating.

SanDisk say that it’s 50% faster than all other current SanDisk Extreme UHS-I microSD cards, and incorporates proprietary Western Digital tech to reach them. So, whether or not a competitor may show up offering similar speed capabilities is unclear. This card is already way beyond the 104MB/sec bus speed defined by the UHS-I specification.

Although announced at Mobile World Congress, microSD cards aren’t just for phones. They’re used in drones, action cameras, 360° cameras and all kinds of other devices. Which of those will allow you to get even close to the maximum speed capabilities of this card, though, will depend on the actual device you’re using. Even if your device can’t support the maximum speeds, at least it’ll allow you to get your content off that card quicker once it’s in the computer.

Content creation aside, it would be nice to see other devices that use microSD cards starting to support these kinds of speeds. Devices like the Raspberry Pi and ASUS Tinker Board. Both of which I’ve used as mobile backup devices in the field before now to duplicate images and footage before I leave the location.

There’s no official word on price yet, although Tom’s Hardware has suggested it’ll be $300. There’s also no news on a release date, either, but the SanDisk Ultra 400GB microSD card has seen a slight price drop since the announcement, so it may be quite soon.