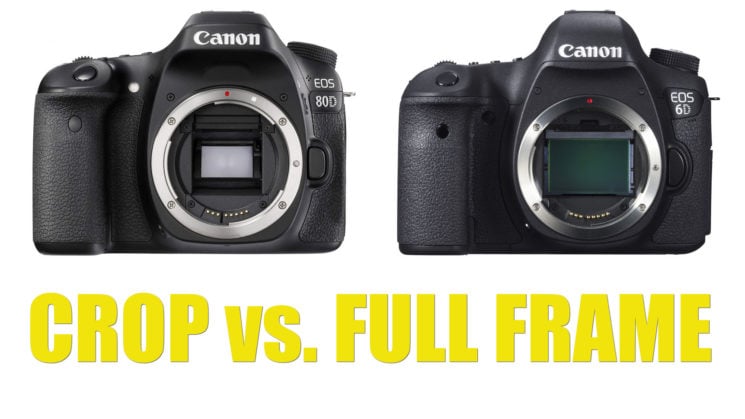 Full frame vs. crop: which one should you buy? Whether you’re getting your first camera or want to upgrade from the one you already own, this is one of the decisions you need to make. Photographer Sheldon Evans shares his experience with both types of DSLRs. He switched from full frame to APS-C, now he’s going back to full-frame, and he’ll give you some reasons why you should choose one over the other.

Sheldon says that the majority of his work was shot on a Canon 6D, a full frame camera. But when the time came to buy a new one, he chose a Canon 80D. The main reason for this was to get a camera with good AF for video. But also, he needed a lightweight camera for long wedding shoots because he didn’t want to carry too much extra weight all day.

“Why didn’t he just buy a mirrorless if he wanted a lightweight camera?” I can almost hear you asking. Well, he actually did. He bought a Sony a6500, but after using it for a while, he realized he simply didn’t enjoy working with it and he got back to Canon.

After using both full-frame and crop cameras, Sheldon got himself a Canon 6D Mark II. He says it has everything he needs, but he says that having a full-frame sensor doesn’t necessarily make it better than some APS-C cameras. He gives a couple of differences between the two, and hopefully, they’ll help you make a decision when buying your first (or next) camera.

The choice between full frame and crop sensor depends on what you want to shoot. If you’re looking for an extended range and shoot events, sports or wildlife, Sheldon suggests going with an APS-C camera. But if you prefer shooting architecture, landscapes, interiors and using wide angle lenses, then a full frame camera is a better choice in order to avoid too much distortion.

Basically, when choosing between a full frame and a crop sensor camera, it all comes down to this: preferences and limiting factors. You should choose the camera based on your preferences and think about why you need it for. Personally, I’ve only used crop bodies, because a full frame camera would be an overkill for my needs and also too heavy on my budget. But if you want to go pro, keep in mind that a full frame camera doesn’t make you a professional photographer: it’s your skill and knowledge that do. So, make a decision based on your needs, plans, and preferences, and I hope Sheldon’s remarks will make it easier for you to decide.

[I ABANDONED FULL FRAME for crop sensor cameras… but I’M BACK! (M43 APSC and Crop Factors) via SLR Lounge]

Crop vs. full frame sensor: how different cameras perform with the same lens

Full frame vs Crop sensor: can you tell the difference?

« A camera lost at sea reunites with its owner after 2.5 years
This virtual reality project shows you what it’s like to be homeless »