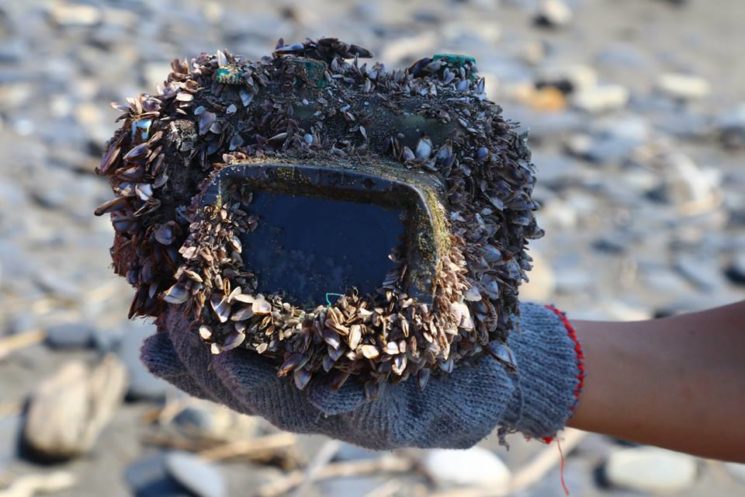 A few days ago, a group of children was cleaning up the beach in Taiwan when they found an unusual “rock” covered in barnacles and shells. Upon a closer look, the kids and their teacher Park Lee realized that they’d actually found a camera – and it was still working inside its underwater case. They decided to try and track down the owner, so they posted some photos on Facebook. After only one day they found a girl who had lost this camera more than two years ago!

The story began when Serina Tsubakihara, a university student from Japan, was on a vacation. She was scuba diving near the island of Ishigaki, Okinawa, about 155 miles east of Taiwan. As she tells BBC, she dropped the camera when one of her friends ran out of air and needed her help. This happened in September 2015, and she believed that the camera was lost for good. However, it eventually got washed up on a beach in Taiwan, where it was found by an 11-year-old boy.

As the teacher Park Lee tells BBC, at first everyone thought that the camera was broken. But then they discovered the button that opens the underwater housing, and inside of it, there was a camera in perfect working condition. According to Lee, the boy even managed to turn the power on.

After returning to school, Lee and his students discussed what to do with the camera. They didn’t think it was ethical to go through someone else’s photos, but they eventually decided to do it so they can track down the owner. Lee posted a couple of photos on Facebook and described how and where the camera had been found. He assumed that the owner was Japanese, so his post was written in both Chinese and Japanese. The post was shared nearly 13,000 times and in about 30 hours, the owner was found.

The camera owner Serina Tsubakihara tells BBC that she couldn’t believe it when her friends sent her the Facebook post with the pictures.  According to the same source, she plans to go to Taiwan in June to meet Lee and the children, thank them, and reunite with her camera.

« Cheap DIY Photography Gear From the Dollar Store
Full frame vs. crop sensor: is it really worth switching to full frame? »