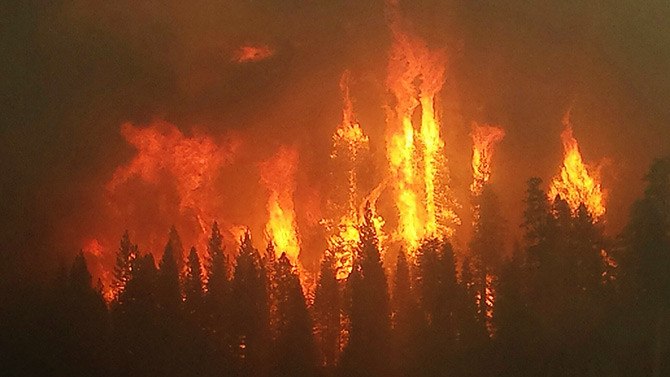 Selfies are just a part of our culture today, whether stills or video, but they have been known to land people in hot water a time or two.  Sometimes the consequences are simply a little embarrassment, sometimes very severe (and rightly so).

In what seems more suited to ridicule on America’s Dumbest Criminals, California resident Wayne Allen Huntsman captured a video selfie with the beginnings of what would become known as the King Fire, a wildfire that scorched over almost 100,000 acres of land in El Dorado County, California in 2014.

The massive wildfire, which started on September 13th, 2014, took out 12 homes and 68 other structures across a little under 100,00o acres, caused at least 12 injuries, required more than 20,000 people to be evacuated from their homes, and lasted for almost a month.

Huntsman was initially arrested only five days after the blaze began on September 18th, 2014, thanks to retired firefighter, Kars Knutsen, who happened to be driving past as Huntsman fled from the initial blaze, who became both his saviour and his demise.

After being saved, Huntsman showed his new friend a selfie video he created shortly after starting the fires he claimed to be escaping from, who recorded a copy from the camera’s screen.

After initially pleading not guilty to starting the fire in 2014, District Attorney, Vern Pierson, announced that Huntsman has now pled guilty to through counts of Arson to Forest Land amongst other charges.

Also of interest is how evidence was gathered to help get the conviction.  As this reenactment video from The Sacramento Bee illustrates about 2 minutes in, quadcopter drones were used to record footage of the areas around the blaze in order to capture vital evidence before it was destroyed by fire.

Huntsman was ordered to pay over $60,000,000 in restitution to the victimes, and was sentenced to 20 years in prison, the DA Pierson said in a statement.

Hundreds of pine seedlings have since been planted at Stumpy Meadows Lake to help bring the forest back to life.

Maria Mircheva, executive director of the Sugar Pine Foundation, told the Sacramento Bee, “It is a rebirth, and not just devasation”.

The rebirth, however will take some time.  One district ranger estimated that it would take around ten years to reforest 10,000 acres.

Sometimes, selfies prove to be useful for the rest of us, even if not their creator.

California Paddleboarders Follow Great White Sharks to Get a Selfie