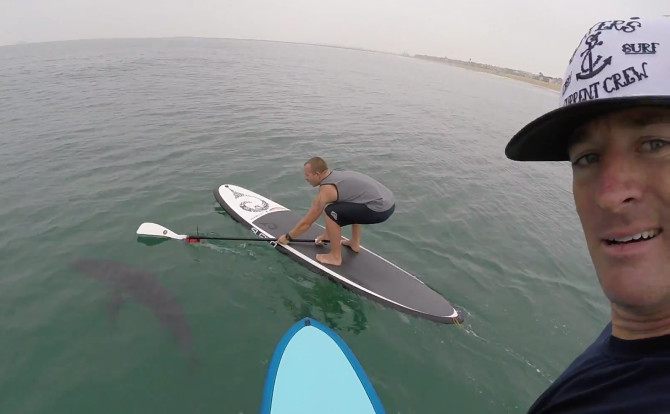 When you hear about human-shark interactions it’s usually about shark attacks or sharks swimming nearby people. Even when there’s no sign of aggression whatsoever, the media rarely misses the opportunity to play on peoples’ fear of sharks and draw some attention.

This video, captured by a paddleboarder with a GoPro, is rather unusual though. Not only did Courtney Hemerick and Joseph Trucksess encounter great white sharks at Orange County’s Sunset Beach, they actually entered the waters with their flimsy boards in order to see them.

The mission? Shark selfies, according to the Orange County Register.

Sadly, despite the fact that the duo was there by choice and was actively following the sharks, National Geographic still felt the need to sensationalize the video and make it sound as if an attack was imminent.

Sorry to disappoint you, but there’s none of that in this video. Although there was more than one shark nearby the paddlers, at no point does the video show it. Also, they aren’t so much surrounding the people as much as they are being followed, at some point maybe even harassed, by them.

Oh, and the “action”? Just a docile shark on a swim. No threatening behavior, no attacks, not even young sharks feeding on stingrays. That’s the actual reason why they’re near the coast, by the way.

Ok, enough with my rant. Here’s the video and the story behind it:

It turns out that several juvenile great white sharks have been frequenting the area lately, with about ten of them reported in the past few months.

The specific sharks seen in the video were estimated to range between 4 to 7 feet. Great whites at that size feed off small prey, are less aggressive and a lot less intimidating. As word spread out about these young sharks people have been showing up attempting to spot them; mostly from the beach, but some have entered the waters to do so.

Nervous at first, Trucksess said he started feeling safer after half an hour with the misunderstood apex predators.

“My perception of sharks has been so distorted by Jaws and other movies, it was cool to see how peaceful and non-aggressive they are”, he added.

He and his friend spent a total of three hours in the water and as the video shows they become quite comfortable around the sharks.

These people must be crazy, right? I mean, who in his right mind would seek to company of sharks? Well, they aren’t as dangerous as the headline-seeking, fear-mongering media might have you believe.

“I think where these guys were and what they were doing was probably fine,” Gregory Skomal, a shark expert and scientist with the state of Massachusetts, told National Geographic.

“The sharks in the video are probably checking the paddlers out, with a level of curiosity but also a level of caution because they don’t know what they are looking at,” he said, adding that sharks of this size “are very unlikely to bite”.

They are still wild animals, lifeguards warn, and ask that people use caution around them. Still, the fact that the beaches frequented by these young sharks remain open proves that they aren’t all that dangerous.

“It was cool to be in their territory, on their turf,” Trucksess sums the experience.

I think it’s awesome that people have the opportunity to experience these majestic animals up close and personal, and witness them first hand.

That being said, if you go out looking for sharks make sure you don’t do anything stupid. One mistake and that could be the end. Not for you, (OK, maybe for you as well) but for the decent press the sharks have finally been receiving.

Taking photos means you’re not focused entirely on safety, and we’ve seen how deadly selfies can be, so just do us all a favor and keep the sharks out of trouble.