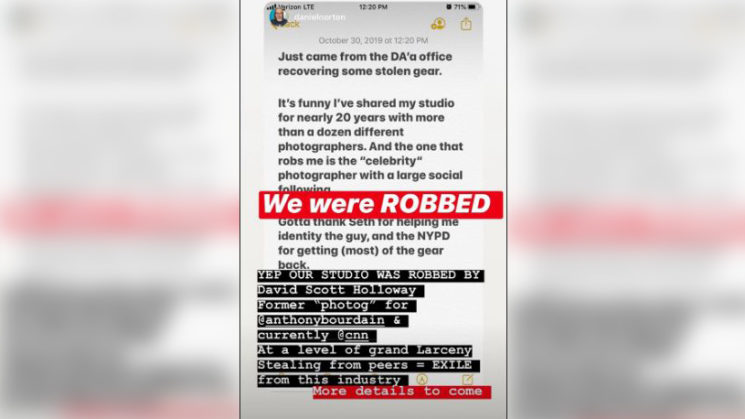 A few months ago, photographer Seth Miranda and a few other photographers had their gear stolen – by a fellow photographer. Seth and his colleagues had between $12,000 and $15,000 worth of gear stolen from their NYC studio. Seth went public about the case a few days ago, sharing the story with his Instagram followers now that the suspect has reportedly admitted to the crime.

In a series of Instagram Stories, Seth revealed that his studio was robbed by David Scott Holloway. He writes that it’s funny to get robbed by a “celebrity” photographer after sharing his studio with more than a dozen different photographers for 20 years. As it turns out, Holloway is currently working for CNN. He was also a set photographer for late Anthony Bourdain’s show Parts Unknown. 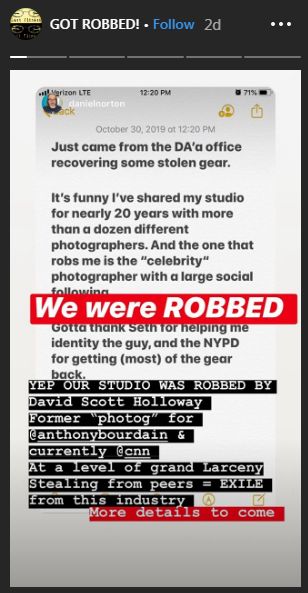 PetaPixel got to speak with a few sources close to Seth’s studio. According to them, Holloway joined the studio in late spring 2019. Despite his “celebrity status,” he reportedly didn’t really act like a professional. The sources claim that he would book all the available slots in the studio and not appear, only in order to “mess with the other photographers.” He was reportedly always late with his rent, and he left the studio without notice in July this year.

Holloway reportedly returned to the studio to pick up his things, and the studio’s owner withheld his security deposit. According to PetaPixel’s sources, he cleared out his things on 21 July but handed over a fake key on that occasion. He then returned on 11 August, and he was captured on the studio’s security cameras. He took between $12,000 and $15,000 worth of camera gear and his act was described as “obviously premeditated.”

Fortunately, the tenants were able to identify Holloway from the security tapes. They reported him to the police and then their search for the stolen gear began. Fortunately, Holloway kept the gear. According to PetaPixel, it was “either because he needed to use it, or because some of the specialized gear he’d stolen would be hard to sell without arousing suspicion.”

In one of the Instagram Stories, Seth revealed that it took four months to get the gear back. In the meantime, he and the rest of the guys had to borrow, rent and buy new gear in order to keep working. Seth also claims that Holloway admitted to the crime and he returned most of the gear “in exchange for lesser charges.” And he allegedly did do it as retaliation for the withheld security deposit. 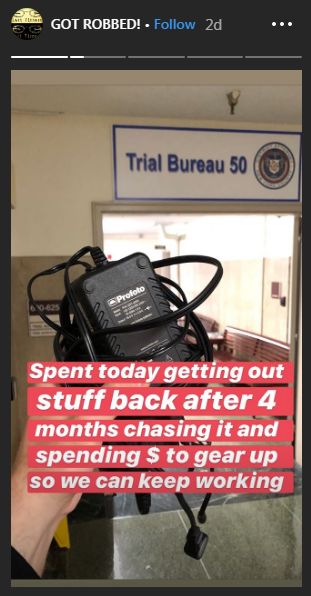 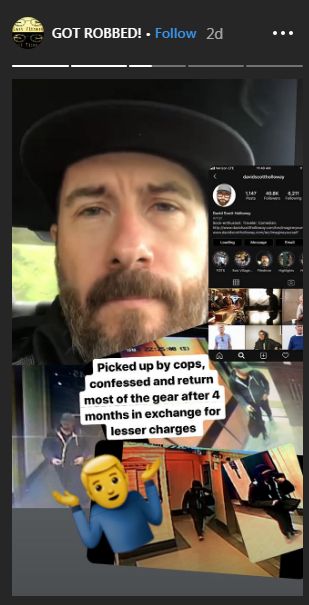 Now for the part I found pretty shocking. The NYPD allegedly told the robbed photographers that Holloway won’t face any jail time or any other major consequences. Reportedly, they said that this was “the best outcome they could expect.” Sure, they got the gear back, but there was still a crime committed wasn’t it? Or am I getting something wrong here?

Naturally, the photographers aren’t really happy with the outcome. They got the gear back, which certainly is a good thing. But they had to wing it and spend extra money to buy and rent other gear during these four months. Also, as far as I know, thieves generally do face consequences even if the stolen goods are retrieved. I must admit I’m confused.

Still, Seth ends his series of Instagram Stories with a positive message and a shoutout to everyone from the community who helped them go through this period. “It’s good to know [support] still exists even when you’ve been jacked by a ‘peer.’” 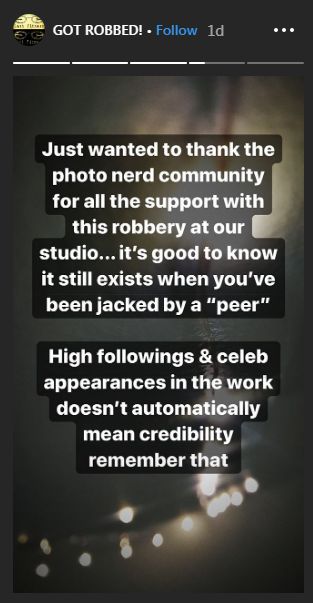 Daniel Norton was among the robbed photographers as well. He also shared a positive message when he was reached out for a comment. “I guess if were to add anything it’s that during the period we were without gear and could have potentially lost work, friends came through with loaner gear and support,” he told PetaPixel. “While this guy might give a bad taste in one’s mouth about photographers, the rest of our community really showed he’s not the typical photographer. I still believe most are willing to help when able and support fellow creatives.”

I believe that this case indeed left a bad taste in everyone’s mouth, most of all for the robbed photographers. It even made me a bit frustrated to hear that there won’t seem to be any consequences for the thief. However, stories like this have a silver lining. Just like Seth and Daniel noted, there were a lot of people willing to help them with gear and support. In times like these, we sometimes get to realize that we are surrounded by way more friends than foes. And it’s certainly a comforting thought.

According to PetaPixel, David Scott Holloway declined a request for comment citing his attorney’s advice. His website is still available, but his Instagram page went private. If we hear more about the case, we’ll make sure to update the article.