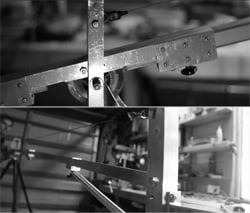 The following film by photographer Martin Roberts shows the construction of an aluminum and bearing based camera crane (similar to some designs we have featured before). The crane is used to extend the reach of the photographer both in height and in length.

The crane is very light weight (5.3kg to gain 2.65m worth of reach) supporting a Canon 550D and lens (about 1 Kilo), it is also easy to setup and tear down location.

Here is how Robert describes it:

“This is the second camera crane that I have built. Learning from my first design I wanted to make this version simpler and quicker to setup. My first version took around 10 minutes to setup and was very fiddly to get right. This version takes less than 2 minutes from removing from my backpack to having the camera mounted on the crane. It also does not require any tools as I am using thumb screws on all adjustments.

This version also provides a smoother action as I am using ball bearings for the centre pivot (I used a kids scooter wheel). It uses a cable and spring for the action which provides smoother action than fixed rod of the first version. The cost for the parts runs to about $140.00AUD and would have taken about 16 hours to build if I did not stop to film everything.

This film shows the construction of the crane with two sliding extensions to give a range of 1.85m. I have also built a 3rd extension which adds another 850g and 800mm reach (total 5.3kg, 2.65m), which is not shown in this film.

While there are no complete plans for the crane a lot can be learned by watching the movie and  the accompanying Flickr images. There is also a ton of info on the Vimeo comments as well, so if you are planning on building one of those, you may wanna go through them.

Sadly Robert will not sell those. I wonder if anybody else will pick up this ball…

How to Build A Big Axx 4 Meters Homemade Camera Crane