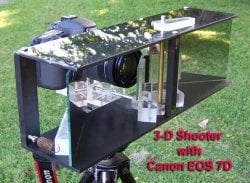 In the past we covered some nifty ways to create 3D images with a single camera. Or even with two cameras. However, there was always a need to take two images, one for the left eye and one for the right eye.

So either you used two cameras (great for video, though not very cheap) or took two images (great for stills and way cheaper).

Instructables user courtervideo created a plexiglass based system for taking the two images using one camera.

The system works by splitting the field of view into two separate views using 2 perpendicular mirrors. Then, another set of bigger mirrors (at eye-to-eye distance) simulates the two eyes.

The full tutorial, along with explanations and diagrams can be found on Instructables.

How to shoot, edit and deliver 6 videos in a single day