After posting that last DIY Jib Video we had some complains about the fact that there are better, more functional and easier builds to make.

While we shared some easier/cheaper jibs in the past, we thought that this was more of a full blown job and was worth a share. 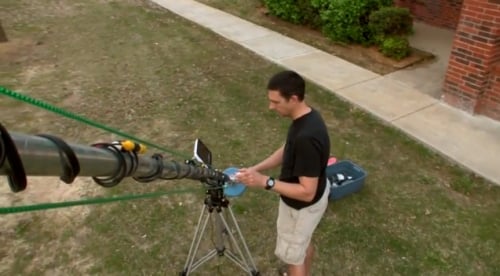 Reader Rick pointed out that The Frugal Filmmaker has one of the best DIY crane/jib tutorials out there called the Frugal Crane 2.0. Unlike most DIY jibs it only uses 1 rod. So leveling and control is achieved with a garage door pulley and vinyl coated line.

Being a fairly large jib, it is built to be operated from the rear end, so Scott installed a $60 Coby monitor so get the camera view at the operator position.

P.S. There is some evolution involved, the Frugal Crane 2.0 evolved from a first version were the video has lots of useful pointers on building a jib. If you’re gonna build the 2.0. make sure to watch the forefather revision first.

How to Build A Big Axx 4 Meters Homemade Camera Crane