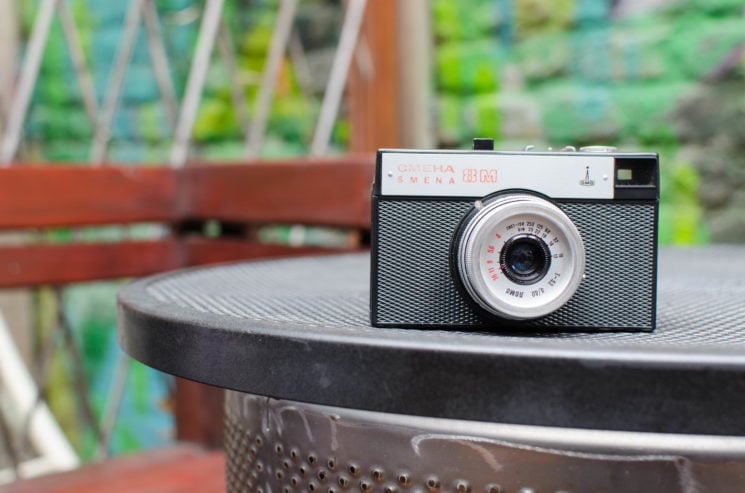 Fans of vintage gear are always happy when they find an old film camera in flawless condition. But what about finding hundreds of them? There’s a stash of brand new Soviet cameras in a Kazakh warehouse, and photographer Andrey Khludeyev told a story about it.

Andrey is a film photographer from Almaty, the largest city in Kazakhstan. His friend Chingiz often finds old cameras in flea markets and then resells them to film and vintage camera fans. One day, Chingiz gave Andrey a Smena 8M, a Soviet camera still commonly found today. You can find used ones on eBay and flea markets, and my auntie even found one when cleaning her basement (you can see it in the photo above). But what was strange about Andrey’s Smena 8M was that it was brand new, in an unopened box.

When Andrey asked Chingiz how he found an unopened Smena 8, he revealed that there seems to be a warehouse full of them somewhere in Kazakhstan. Chingiz had connected with a flea market seller who sold him this brand new Smena 8M. When he bought the camera, the seller told him that he had more than just one. It turned out that he was not talking about tens or dozens, but hundreds of unopened Smena 8M cameras in mint condition.

“The seller was in Taldykorgan, [a] small city near Almaty, and he didn’t have access to a big market to sell to,” Andrey told Kosmo Foto, “but he seemed to have access to some kind of mystery Soviet-era storehouse, with a huge amount of cameras.”

Chingiz bought 100 cameras from the seller and resold them quickly. They were all brand new, properly packed and stored, so they were fully functional and in great condition. When he wanted to order a new batch, the seller told him that he was ready to sell as many as 500 of them from the same production lot! Chingiz accepted and wholesaled the whole batch to Moscow, and gave Andrey another two of these cameras.

Andrey and Chingiz tried to figure out how the cameras even found their way to Kazakhstan and why they have been stored in a warehouse for all these years. “When I unpacked it, the whole package became even more interesting, as these cameras had been produced for the Polish market,” Andrey explains. “The user manual was only in the Polish language.”

The cameras were produced in 1990, which was the very end of the Soviet era. The political situation of the times is probably the reason why they never reached Poland. And “only the Soviet planning economy system knows how they made their way to Kazakhstan,” Andrey says.

Still, after 30 years, hundreds of Smena 8M cameras have found their new life. Andrey loaded his with a roll of Svema, a Soviet-era film that expired about the same time when the camera was produced. He says that the camera worked perfectly, without any flaws. The photos he shot went to his book Expired, the collection of photos shot on old Soviet cameras and expired films. “In fact, this Smena helped start this project,” Andrey says. And I wonder how many interesting projects are still to get started on one of these cameras that have finally seen the light of day after three decades.

Lomography unveils the Jupiter 3+ ‘Art’ Lens, an update on a Soviet classic