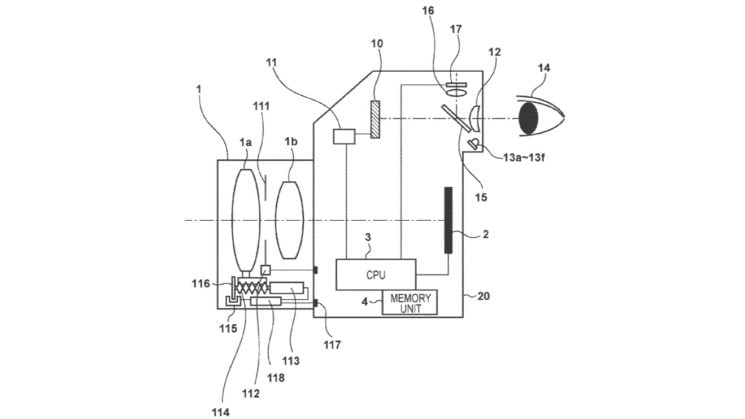 For those who hear about the fact that Canon used to have 35mm SLRs with eye-controlled AF, but have never had the opportunity to try it themselves, it’s an intriguing proposition. Look at something, and the camera just focuses on it. Sounds great, right? Well, for those that have actually used it, the response is very mixed. My dad had it on his EOS 5. He loved it. I tried it and I hated it.

The theory’s great, but the implementation wasn’t. Canon seemed to abandon the idea, but now a new patent suggests that they might be looking to reintroduce the concept into future EOS R mirrorless cameras at some point.

Before you get too excited just, though, we may not see this any time soon – if at all. The bulk of the patent appears to be the same as one filed by Canon Japan in 2019 – although this one’s been filed with the USPTO. The big difference with the new one, though, adds a couple of new features.

The benefits of #1 are obvious, especially if you work in a team, or you have a camera that’s shared between members of your family, for example. It’s like personalised settings in a car, that adjusts itself depending on who’s about to start driving it. The camera would “look” at your eye, know who you are and adjust its settings to those calibrated for that user. Give the camera to somebody else it knows about, it can automatically shift that calibration over to them. A very cool feature.

But #2 is a little confusing. The only reason I can think that it “remembering” what you looked at before would be to prevent one of the biggest potential issues with an eye-controlled focusing system, and that’s having it hunt as you scan around the frame looking for distracting elements in your shot – something that a number of people complained about with Canon’s previous eye-control focus incarnation.

If the camera’s smart enough to figure out what it is that you actually want to focus on and remember that while you scan the entire composition before hitting the shutter, then that’s definitely a step in the right direction.

Even though nothing has really happened with the patent in a while, the fact that they’re still working on it and solving problems that users will potentially face in the real world suggests that we may actually get to see it in a camera again one day. But I wouldn’t hold your breath.