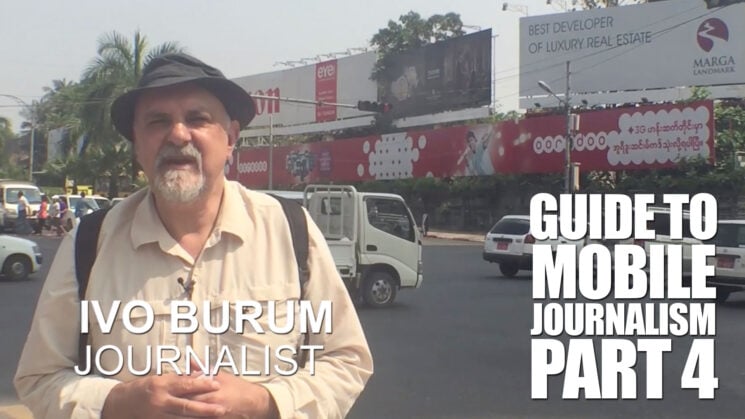 In 1993, while working in television, I taught select groups from our audiences to use small digital video (DV) cameras to tell their own personal stories for self-shot TV series.

In 2007, the advent of the iPhone was another game-changer. It became apparent, at least to me, that mobile technology, like DV cameras, would redefine the way we produced TV, even the way we did investigative video journalism. It was a lightbulb moment.

By 2010, we were completing the whole production process, even the all-important edit, on the phone. This gave mojo stories their own diverse and unique voice.

This is especially critical in a world, “where the state, politicians and agenda-driven publishers try to muzzle media and free speech,” says Rana Sabbagh, MENA editor for OCCRP.

Nearly all types of video stories can be shot and edited using a smartphone. But working solo has drawbacks as well as advantages. Journalists might consider the following development and workflow points when working in the mobile story space.

Story (capital ‘S’) is everything, without it you’ll lose your audience and without that you may as well do something less demanding.

Philip Bromwell, a video journalist from Ireland’s RTÉ, who works in the mobile space, says: “My job requires me to tell stories, and we have to remember the audience doesn’t really care how content is created, but they will engage with a good story.” Bromwell’s focus on the audience and story, ahead of the technology, is important. “Although I can film and I can edit, my primary skill is as a storyteller,” he says. “I am certainly not a ‘techie’ and I am not as obsessed as others are with having the very latest piece of mojo gear.”

Having a story focus enables the mojo to choose the right gear. For example, shooting sport may require a hybrid DSLR and long lens kit to be able to shoot the required shots from a distance. Conversely, in war-torn Yemen, a small mojo kit can make a journalist less of a target.

So, how do you find the story? First, you need to follow your passion, then you decide if you have an audience for your idea, next you need to know who the good guys and bad guys are, understand their journey and have access to all the players.

Before you develop your idea choose a topic, know your market and ask the following:

As the concept gets more of a story focus, I complete a more specific SCRAP check list:

SCRAP helps answer journalism’s 5Ws — who, what, when, where, why and how. To better understand these relationships between your story and its audience, consider the following:

Mojo news stories may be breaking and unplanned, so it’s even more important to quickly determine a story focus and the best characters/interviewees to help tell the story. Knowing who to film is important when planning a mojo video production. Unlike print, you can’t just call everyone on the phone — mojos need pictures. For example, we can’t ring someone for a quick phone interview — they need to be on camera, so managing time and expectations is critical.

For example, who do I interview at the scene of an accident and, importantly, who do I interview first? Can I ask the ambulance driver for a comment while he is inserting an IV line into an injured person’s arm? If not, how do I cover this as B roll, so that I can ask my questions when the paramedic is free? What’s most relevant in a breaking story at a Bosnian war grave? More bodies, longer interviews with a witness, or the man with photographs of his missing family, who he believes are among the dead? Do I need it all? If so, how will I record it all and how will I include it all in a short video story? The best way to decide who’s relevant is to:

Once you firm up interviewees, you might need to rejig your structure and how you will use your talent:

You can generally work the above out once you begin mapping your structure.

Ivo’s tip: If it’s a choice between a smart interviewee and an engaging one, choose the latter, if you can’t have both. You can always add the factual smarts using narration and B roll.

Next, I create a simple five-point structural road map of how my story might go. This guide does three important things: (a) it articulates the various plot points and (b) acts as a story and character checklist and (c) is the beginning of my edit plan.

Because real research happens on the ground, and because story changes, you need to understand your options and be prepared to shift your views on location. That’s where a simple structural plan helps. Rather than being prescriptive, a plan keeps the story focused and the mojo open to new ideas. A plan is also a checklist to help decide if everything is covered before wrapping location.

Story is built around an EVENT that impacts our CHARACTER. Through a CHARACTER’S eyes we witness action, strife, emotion, visual and dramatic development corralled in the place holder we call an EVENT.

Video works best when it’s centred around EVENTS (that provide currency), told through the eyes of a CHARACTER (that makes it real, personal and emotive), who RISKS losing everything (the stakes and the drama).

One of the mobile journalist’s jobs is to design a STRUCTURE around EVENTS that tell a STORY and give rise to certain EMOTIONS. In essence, what we as mojo’s do in telling STORY, is capture a CHARACTER’S emotive JOURNEY.

A story event creates change in a character that’s expressed in terms of value (impact) and often achieved through an attempt to overcome an obstacle (a conflict). As mobile journalists we need to look for that CHANGE, and in particular, the RISK experienced by our CHARACTER(s).

Ask: What does our character stand to lose if s/he does not get what they want?

A Free Guide to Mobile Journalism Part 1 – What is Mojo?