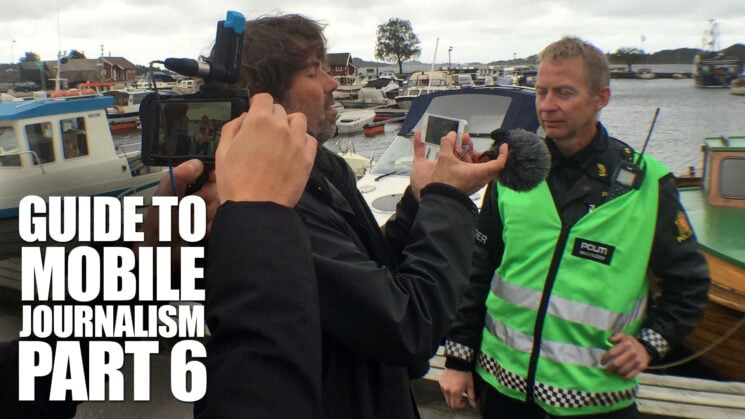 In the TV business, we have a saying “waiting on sound” and no truer words have ever been spoken. Soundos are always doing something like waiting for an air-con to switch off, or a car noise to disappear, and we wait with them. And when we aren’t waiting on sound, we often treat sound as an after-thought. But sound is the most important of all the recorded elements.

Here are some tips on location sound recording picked up over my years of television and mojo production and training, which will assist your mojo work.

Mojos typically work without a sound recordist and need to be aware of sound issues when interviewing, shooting B roll and recording actuality audio. It’s a difficult juggle but with some practice mojos can become very effective one-person bands.

Clean audio recording begins with a sound strategy — having the correct equipment and knowing how to use it — understanding the parameters of the task and planning accordingly. If you’re recording speech, one of the dynamic microphones or cheaper lapel mics mentioned in the mojo tools article might be right for your job. At a press conference, a demonstration, or a sporting event, where cables can be an issue, a wireless set-up might work best. However, whether you’re using a lapel, shotgun, or wireless microphone, it helps to understand sound recording principles.

Generally, the closer a microphone is to the sound source, the more focused the audio, and the richer the sound. A microphone’s polar or pick-up pattern determines how it picks up sound — at the front, the side, behind or all around the microphone capsule:

Here are some tips for recording audio as a one-person band or mojo in a variety of scenarios.

Actuality is the time-sensitive content that you don’t need to set up – police, ambulance, or witnesses at an accident – it’s not full of the journalist’s questions. Sometimes called B roll, cutaways, overlay, and a bunch of other names, actuality is used during an edit to create atmosphere, cover cuts, and can give the story currency.

Ivo’s tip: Never record actuality or B roll mute because you never know what will be said.

On-camera cardioid, super-cardioid and super-directional shotgun microphones may be the right option for mojos covering evolving run and gun events, primarily because mojos normally work close to the source and not on a long lens. These on-camera microphones have a directional pattern that focuses on audio in the direction they are pointed.

In this article we preview some Sennheiser microphone options ideal for mojo work. A more comprehensive list can be found in The Mojo Handbook: Theory to Praxis (Routledge). If you want or need a condenser directional microphone with attenuation to enable recording in low-level or loud environments, the Sennheiser MKE 400 ($199.95USD) might be for you. A cheaper option is the MKE 200 ($99.95USD). A stubby directional microphone, it has an inbuilt shock mount and a novel metal windshield. Both microphones come with a dead cat (furry windshield) for use when recording audio in extreme wind in outdoor locations.

Individual interviews are generally recorded in a medium close-up (MCU) shot that’s cut off around chest area; close enough to feel emotion and to enable a sound recordist (when working with a crew) to swing their boom close to the edge of frame. A mojo will shoot most interviews in an MCU and without a sound recordist. For a more animated interviewee, a slightly wider mid-shot (MS) might be best. 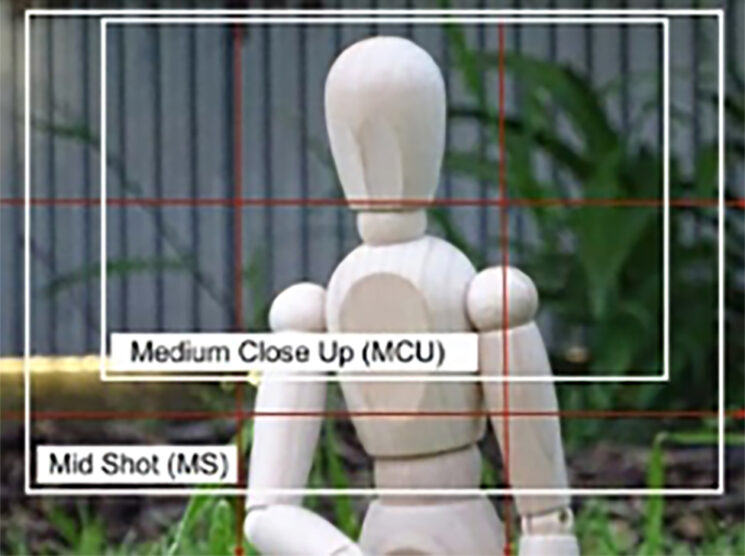 Lapel, or lavalier, microphones are preferable for recording interviews. Pinned 6 to 8 inches (the spread of a hand) from the interviewee’s mouth, they are close to the sound source and shielded from the wind by the subject’s body. The microphone cable should be at least 2.0 meters long, like on the new Sennheiser XS Lav, so it can be hidden under a shirt. 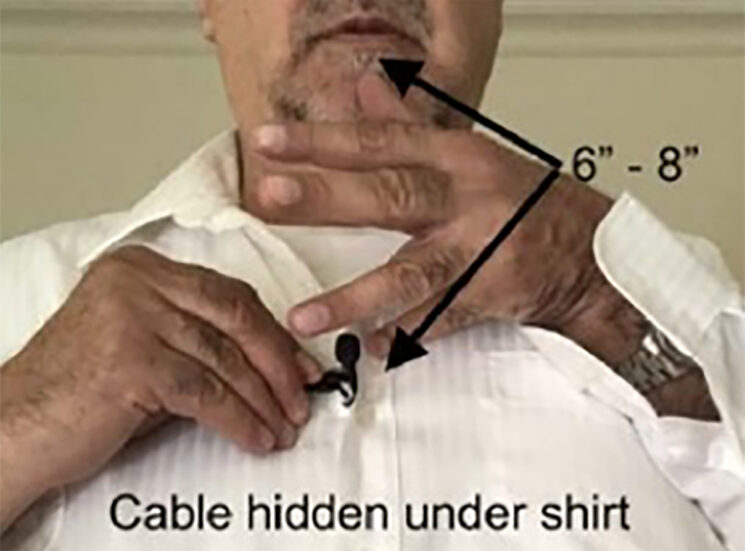 Cardioid and super-cardioid shotgun microphones, placed on the smartphone, will work fine if they’re positioned within a meter of the interviewee and there is not too much background noise. Talent should be positioned so that extraneous noise hits the interviewer’s back and the back of the microphone.

Ivo’s tip: Using a wide lens on your smartphone rig enables mojos to get their directional or top-mic closer to the subject and the sound source while retaining an MCU interview frame.

If interviewees are sitting next to each other, try using an omni-directional microphone placed between them. Alternatively, a splitter plugged into the smartphone enables two microphones to be used when interviewing two people. You’ll get two distinct audio feeds that are recorded as one track on a smartphone. If you need two tracks for editing, you’ll need to record one of the interviewees separately on, for example, a Zoom H1n recorder, or an audio app that records split tracks (and sync in the edit).

Ivo’s tip: If you want tighter audio perspective don’t zoom in, walk in so that the mic is closer to the subject and work on a steadier wider lens and frame.

Handheld microphones: are often used in very noisy location news reporting where they are pivoted between the reporter and the interviewee, a little like a boom operator swinging a boom. With practice, solo mojo operators can use this technique effectively and quickly.

Radio microphone systems, with one of my favourite systems, Sennheiser AVX combo and my new XSW kit

Ivo’s tip: Avoid giving handheld microphones to interviewees who will invariably move them away from their mouths and wave them about.

Radio microphones, also called wireless, are mostly lapel or handheld. They use a transmitter that sits at the source, rather than a cable, to send a signal up to 150 meters away, to a receiver that sits on a camera, or smartphone. Radio mics are used when the reporter, or the interviewee, is mobile, or some distance from the camera or smartphone.

Ivo’s Tip: Buy the best radio mic set you can afford, because you probably won’t change it.

Digital recorders can be handy to record audio separately when two tracks are needed, such as in a boat-to-boat situation, or on a small plane where there’s only room for one. The Zoom H1n (USD100) is small, cheap, and effective. I also use the Tascam DR-10C PCM recorder (USD180) that fits into the palm of a child’s hand. It is often used as a safety pass-through device when recording wirelessly, and its bias can be altered to act as a recording device.

Ivo’s tip: If you are panning between two interviewees ask them not to overlap each other when they speak.

Narration is usually recorded during an edit and for mojos this can occur on location. On smartphones, I mostly record narration as video with audio into the Camera Roll (iOS) and in the Gallery (Android).

Ivo’s tip: When working quickly it’s best to record narration into the same location on the smartphone as video.

The easiest way to do this on a smartphone is to place your hand over the lens so that the shot is black and easily recognizable as narration, and record the narration as video. Doing this means that all assets (video and audio) are found in the same folder on the app, so that you don’t have to search for your narration when editing. You can detach the audio from the black video during the edit, or simply cover it with B roll. Another quick option is to use the edit app’s voiceover record function tool during the edit.

Ivo’s tip: On location, record narration in a car parked somewhere quiet, or in your hotel room in between two mattresses positioned as a tepee, or simply on a park bench with your jacket over your head. Do not record in an echo chamber like a stairwell. 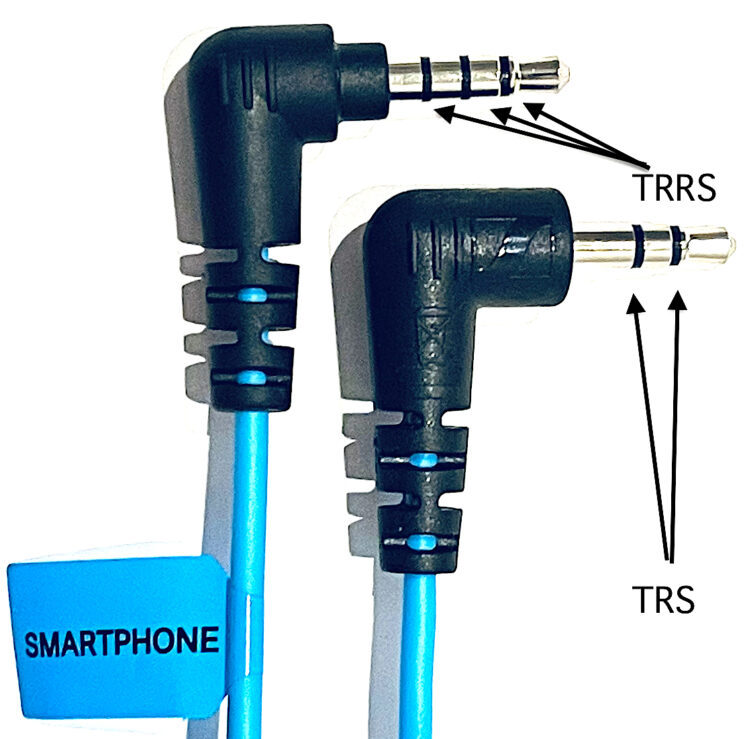 Ivo’s tip: Newer mics can be platform-agnostic choosing between TRS and TRRS automatically.

Treat every shoot like an overseas job, where you need to record everything clean the first time, because you can’t go back.

If you have time, make sure you get a buzz track — 30 seconds of natural location audio. This can be laid under a series of B roll shots to smooth audio transitions in the edit.

Finally, the best tip I ever got about recording audio is to get the microphone close to the sound source and to listen to the location — this is still key to recording dynamic on-location audio.