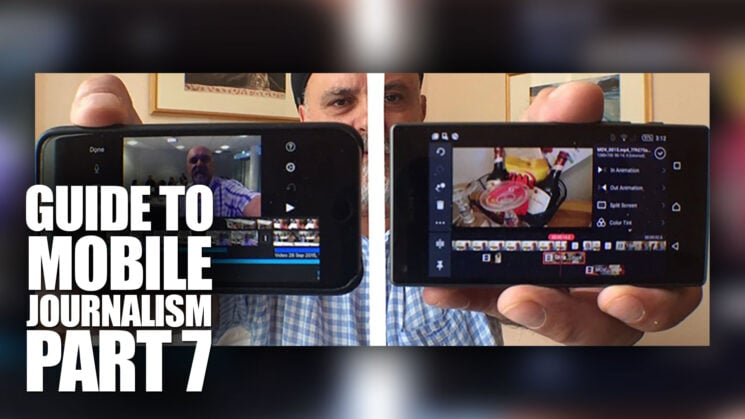 Synonymous with smartphone editing is a growing tendency to worship new apps and post on social media about the new features as quickly as possible.

Being able to shoot, edit and publish using a smartphone enables immersive cross-border reporting. Rana Sabbagh, senior editor for the Middle East and North Africa (MENA) at OCCRP, believes all journalists should learn to edit stories on a mobile. “Editing generates diversity in storytelling and a local point of view’. Sabbagh adds, ‘working on a mobile is often safer than carrying a large camera and laptop edit suite”.

Today’s mobile edit apps allow mojos to slide B roll, alter transitions, duck audio, mix music, create versatile titles, render and send projects to various target sites from almost anywhere with a connection. Android or iOS — it doesn’t matter. But what’s important is not only the technology — the features — but the skillset it’s wrapped in.

Video editing is a way of thinking about converging states of immediate possibility. More specifically, it’s a visual language and a form of digital writing that enables journalists to be video storytellers. Here are some basic tips on how to edit and publish your smartphone story on and from your phone.

I’ve literally spent thousands of hours in edit suites and here’s a summary of what I do at each of the key stages.

Planning the Edit in the Field

Make a SCRAP story plan early in the production cycle and use that as your draft edit map. SCRAP answers journalism’s five ‘Ws’ (who, when, what, where and why) and with the five-point story and structural plan, it forms my first edit map. I use this plan to jot down elements I record — my interview questions, actuality and B roll — against certain structural points I’ve listed. This indicates what I’ve shot (what’s missing) and how my content might best be used in the edit (see Developing Mojo Stories).

Starting is important, especially when you can’t make up your mind about how to start. More than 30 years ago, Ulla Ryghe, Ingmar Bergman’s editor, taught me the hardest lesson in editing when she said, “Ivo, you need to learn to kill your babies.” Beginning the edit helps identify which shots and interviews work and which can be thrown out — killed.

Start with the strongest elements — actuality, interview grabs, overlay, music, and or narration — that best capture the story emotion. A stand-up can also be very effective if the journalist is in the middle of a riot. Don’t get bogged down finessing your edit before you find the structure and the emerging story. Once the story is laid out on your timeline, only then add B roll (unless of course B roll is seminal in early timing).

Ivo’s tip: Try structuring a story to answer what listeners’ questions might be, in the order you think they might arise.

Using a video edit app with at least two video tracks (V1 and V2) enables the story cut to be edited on V1, leaving V2 to add B roll. This places the focus on story — writing in and out of the interview grabs and actuality — rather than on B roll. However, two video tracks also enable B roll to be added early and slipped during the fine cut.

The image below describes checkerboard editing, where video PTCs and interviews checkerboard with B roll and narration. This is done so that you can replace, shorten or extend B roll shots when they are inserted, something that you can’t easily do when editing with only one video track.

The example shows how you might extend the wide shot to overlap some of the interview and do the same with CU 1 (close-up) or CU 2. This creates a more dynamic split edit. A2 is used to add music or FX.

Changing butt edits (where one edit butts up to the next) to split edits, or ‘J’ and ‘L’ cuts (where edits overlap at the beginning, or end of a clip) creates a more dynamic and urgent edit pace — pre-empting audio (J cut) and holding audio (L cut)). 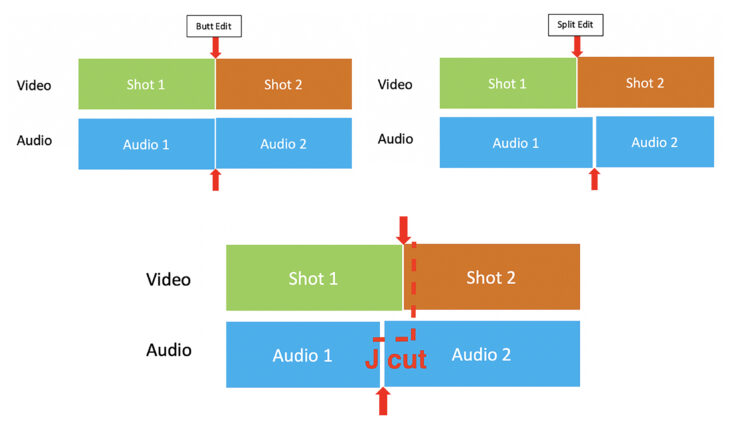 B roll, overlay, or cutaways cover unwanted zooms and jump cuts in an interview, can hide mistakes in shooting, color narration, and is used to compress and expand a sequence.

During and/or just after an interview, make a note of the B roll shots you need. The interviewee might mention an important map. To assist in editing that scene, B roll might include a sequence with the person looking at their map, in a wide shot (WS), in close up (CU), and a CU of map detail. 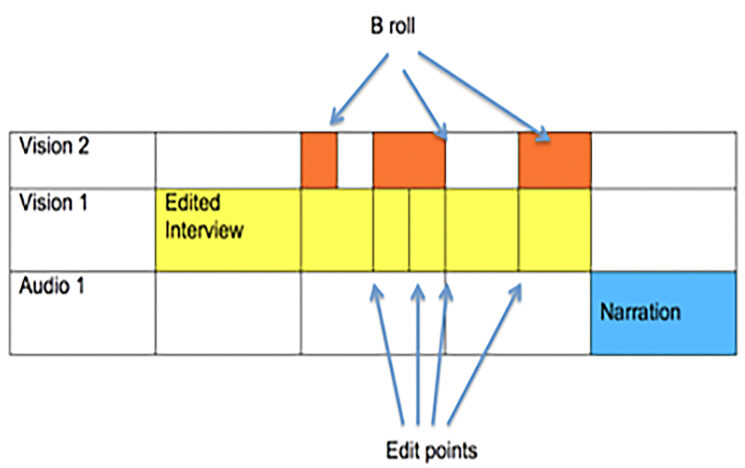 Narration is used to compress rambling sync dialogue, expand sequences, and to segue between story elements and structure. It bounces the story forward by relating to the outgoing sync grabs and introducing the incoming video. This is called writing in and out of pictures.

We used to write and record narration in the car sitting in a park, or in the hotel suite in between two mattresses, even on a train on the way to the edit. In the mobile ecosphere, it often happens at the scene where your five-point plan, with your location scribbles and narration notes, is essential.

Read the narration script into an external microphone plugged into the smartphone and positioned about 6 – 8 inches from your mouth. Record audio (as vision and audio) directly into a camera app, with your hand over the lens, so the shot is black. This enables you to find it fast during the edit, because it will be in the same folder as your video and being black, it will stand out. You could also use the edit app’s voice-over feature.

Except in circumstances where you need audio at super-high bitrates, or specific formats, you won’t need to use a separate audio app to record narration for video. But you will need a good microphone (see Recording Mojo Audio on a Smartphone). 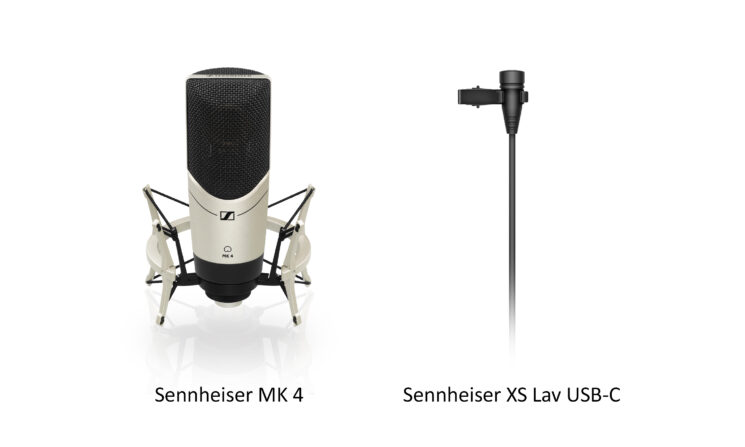 When writing and timing narration, you can work on three words a second, the speed at which we generally read for television. If your video is seven seconds long, you’ll need about 21 words of narration.

Ivo’s tip: Narration shouldn’t repeat what is said in the first words of the incoming audio grab.

Here are some basic tips for writing and recording narration during the edit:

Ivo’s tip: Get a rough narration down quickly to establish timing and story structure and then add B roll and finesse the edit.

Once the edit is at the rough cut (with B roll in place) you’re ready for the fine cut. Where the story’s not working on the timeline, where it fails to move forward, it’s often because the sequence includes redundant information. If you have that problem, try the following steps:

This is different for everyone, but I look for the following in a cut:

I will always ask:

Ivo’s tip: Structure a story to answer what you expect listeners’ questions might be in the order they might arise.

Here are some basic edit rules:

Use an editing app with two or more video tracks: 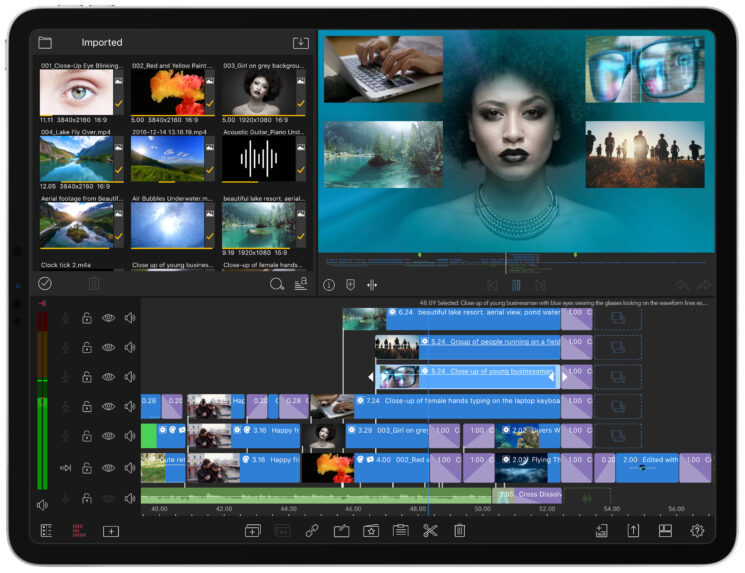 For intermediate graphics on iOS, I use Vont for video and Photo for stills; for Android, I use Kinemaster’s on-board graphics, and for advanced motion graphics, the Alight Motion app takes time to learn but is relatively intuitive and incredibly powerful. It includes grading features. Free with watermark and basic features, and subscription gives added features and no watermark. 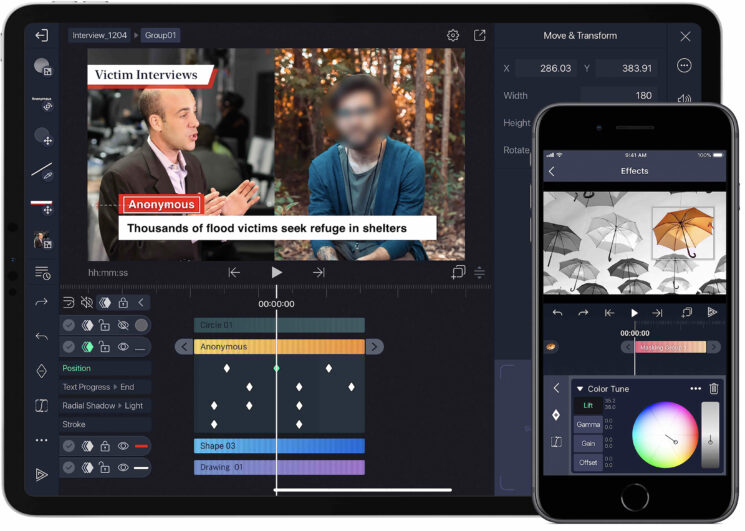 Playing out the Project into a Video

On the timeline, the video is a project (computer language) that needs to be rendered (transformed) into a video. The process involves rendering the timeline in either a hi-resolution (e.g. 4K or 1920 x 1080 HD1), or one of the lower video resolutions (e.g. 640 x 360). Render and export in a low resolution if upload speeds are low, then re-render at a higher resolution and send that version when you have better bandwidth. Once rendered, export to Camera Roll or Gallery and upload to YouTube or a proprietary site.

Even after decades of video production, editing still feels like magic. Only 25 years ago this magical experience was costly and relatively exclusive. Now we carry our own creative edit suite in our pockets. All we need to do is learn how to use our smartphones to write with pictures — that’s the editing process.