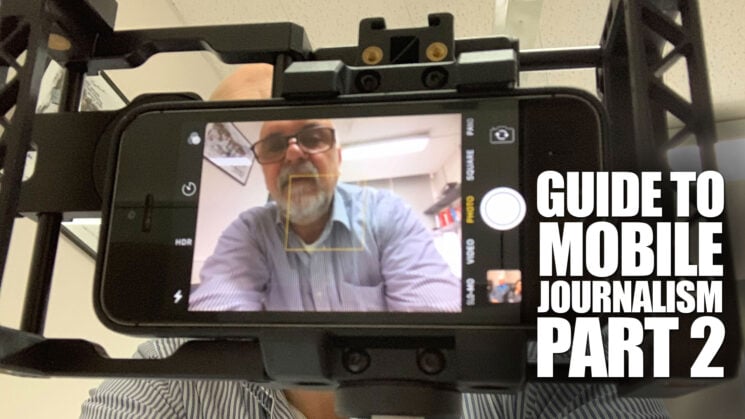 One of the first questions I’m asked during my training workshops is, “Can I do mojo on my phone?” “Not if you don’t have memory!” The next often asked question is, “Okay, which phone do I buy?”

Android is like a coalition winning the race on numbers, while iOS is a rich boutique shop going it alone. Are the cheaper Android phones any good? Absolutely. But do you need a new phone? The simple answer is if you can use your smartphone to produce your mojo story — shoot in low-light, run good camera and multi-layered video apps, and it has lots of memory — save your money. If not, you might need a new phone for mojo.

Ivo’s tip: Before you throw that old phone away learn to use all its features.

Here’s my checklist that debunks some myths around smartphones.

When I began training people to mojo there was a big difference in what phones could do. iOS was a clear winner because of its workflow, lack of viruses, lots of 3rd party peripherals such as microphones and cradles, and there were more iOS mojo apps (see Mojo Tools). The Android operating system (AOS) benefits from Google’s algorithmic power, but handset manufacturers are often at loggerheads with app developers. Android’s open platform enables manufacturers to create a different user interface (skin) across Android brands. Android app developers say this can make it difficult for them to scale apps across multiple manufacturers. Another issue is creating updates for dozens of phones. While the top range of phones get their updates fast, it can take time for them to arrive for cheaper devices, which can lead to security risks.

The best platform for mojo apps is iOS. I can’t find as many free Android apps as good as the free iOS mojo apps (e.g. iMovie, VN, Ferrite, Vont; see “Mojo Tools” and “Editing on a Smartphone” for apps). The other issue that may arise in countries like China is that because there’s no Google Play store you probably need to use OEM (manufacturer) stores.

Ivo’s tip: Buy a good phone on a platform that has all the apps and peripherals you need to create mojo content.

Effective mojo begins by deciding on story, which informs process, before technology. Notwithstanding this, once you decide if you’ll edit on your phone, tablet, or your laptop, consider the following:

My favourite phone is still my old iPhone 6s Plus, which scored 81% in a recent review in Australia, where the top-rated phone scored only slightly more at 84%. It shoots up to 4k (I mostly shoot in 1920 x 1080 resolution) and it has a 3.5mm microphone input. If you use a phone with a Lightning microphone input, you’ll need a mini jack to Lightning cable, or a mini jack to Lightning adapter from Apple. If you use the adapter workflow, you might also need a TRS to TRRS adapter (see Recording Mojo Audio on a Smartphone).

Ivo’s tip: If you are thinking of upgrading your phone, ask whether you’ll have to change your cradles/rigs, adaptors, and microphones. One reason I use the Beastgrip Pro cradle/rig system is that it works across all phone types.

The truth about pixels

Pixels are square Red, Blue and Green representations of trapped light on an electronic sensor (film). A pixel is like a bucket for trapping water (light). The larger the bucket (pixel), the more water (light) it collects. Former Apple camera engineer, Nikhil Bhogal, explains that when it comes to smartphone cameras, pixel quality matters more than the actual number of pixels. What he means is that a large sensor supports larger, more light-sensitive pixels. On a one-inch 12-megapixel sensor, pixels are twice as big as those on a one-inch 24-megapixel sensor and should capture more light in low light conditions. 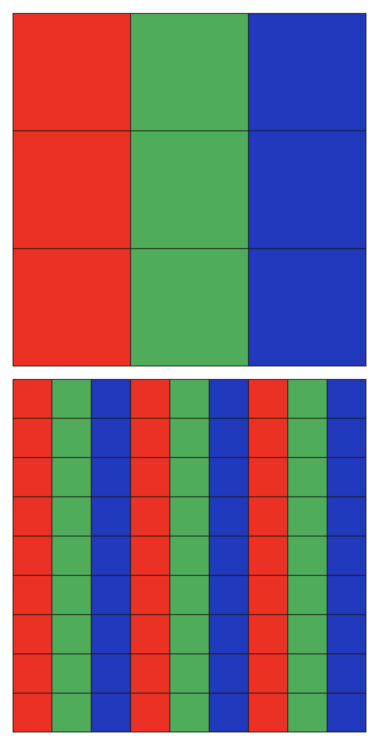 Ivo’s tip: When might 24 megapixels be better? When the sensor doubles in size. If you have a terrible camera with a terrible lens with more pixels you will end up with more terrible-quality pixels.

One lens or more?

In 2016, LG revealed dual cameras and in 2017, iPhone 7 Plus had two independent cameras (12 megs each), the second featuring a 2x optical zoom. A digital zoom degrades image quality by zooming and cropping the edges of the photo and increasing the pixel size to simulate an optical zoom.

Here’s a link to a video on a comparison between three wide-angle smartphone lenses.

The latest scuttlebutt is that Chinese manufacturers OPPO and Huawei are planning 10x periscopic zoom lenses on their cameras. If the optical aspect works, these will enable better sports, wildlife and other coverage where a long lens is required. Now, that might be worth the wait. 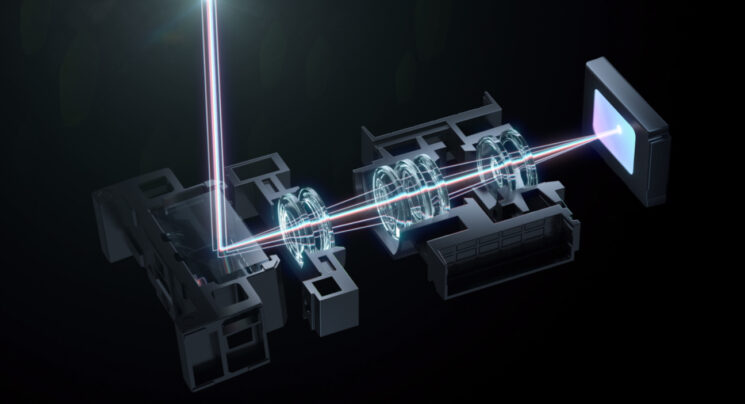 The iPhone 13 Pro now ships with four lenses — even the front selfie lens is 12 megs. The advantage of this phone, apart from being able to switch between lenses, is that the wide lens enables the mojo using the camera, or shotgun mic, to be closer while still retaining the MCU (medium close-up) frame, resulting in cleaner audio (see Recording Mojo Stories).

Another important factor is the speed of your smartphone lens. You should look for the widest (fastest) possible aperture. For example, the new iPhone 13 Pro has a primary lens with an aperture of f1.5 and on the ultra-wide lens it’s f1.8. The aperture, or f stop, denotes how wide the lens will open in low light conditions. The wider the aperture (lower f stop) the more expensive the lens. The picture below, taken using the iPhone Xs, shows the camera’s ability to alter bokeh (depth of field focus), after the shot is taken. One picture shot at f16 has a large depth of field, the other shot at f1.4, has a shallow depth of field. 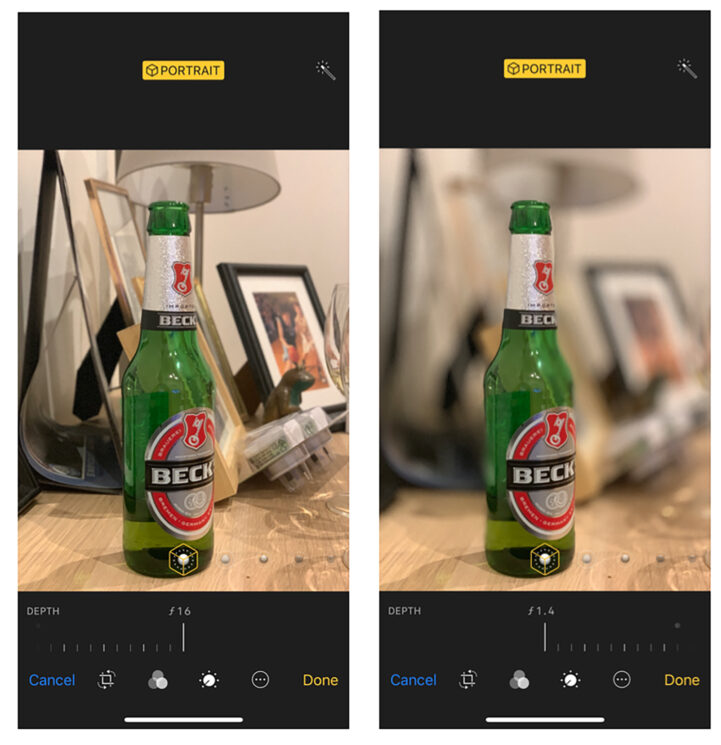 These are essentially Flash Drives designed to connect to your phone. There are generally two types: one creates a local WiFi link with your phone; the other is a plug-in type (Lightning, mini USB or type C). I find the connector type faster, yet the WiFi version can connect to numerous devices simultaneously. Many Android phones also offer SD card memory. 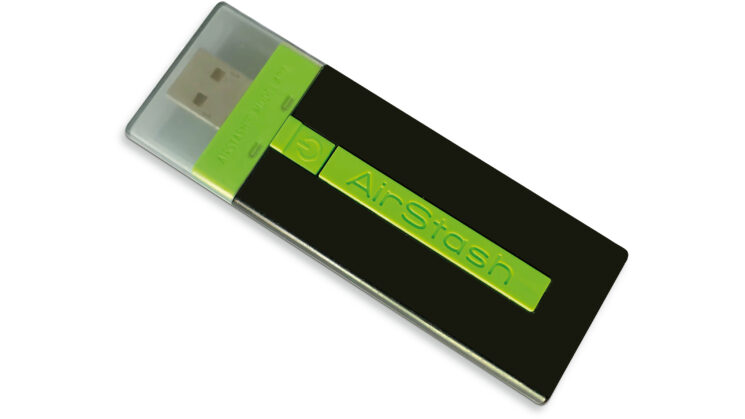 Ivo’s tip: You don’t need to spend lots of money on a large-capacity Flash Drive with lots of storage—they are for transferring content and then they can be wiped.

If you are buying a smartphone to use for mojo work, consider the following:

In short, your smartphone needs to be able to connect to professional microphones, record in at least 1920 x 1080 HD (we are using more 4k, but not always), have enough grunt to run high-end camera apps (FilmicPro, Camera+ 2), run advanced yet easy-to-use audio apps (Ferrite) and multi-layer edit apps (iMovie, Kinemaster, Luma Fusion, Power Director and VN).

Does your current phone do all that? If the answer is yes, hold on to it. BTW, if you do change up, don’t throw your old phone away, take a look at this DIY radio microphone video before you do.