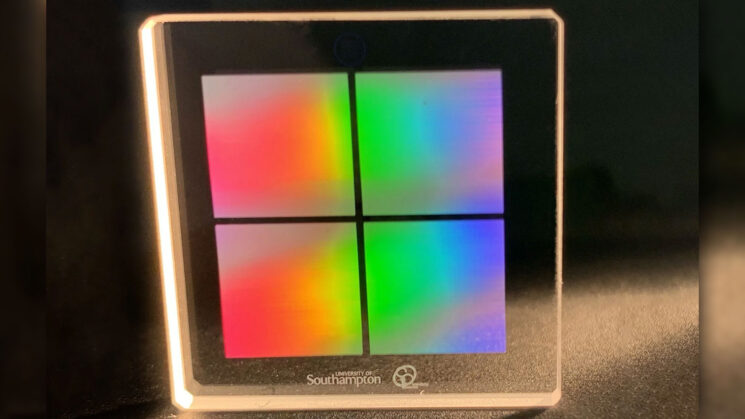 Some of us are struggling just to maintain our ever-growing archive of photographs and video footage. Every few years, we have to update all our drives to newer, faster, higher capacity and more reliable ones to try to ensure we don’t lose anything. And for most of us, that’s only a few terabytes. But what if you could store half a petabyte, indefinitely?

Well, technically, it’s 13.8 billion years, but for all intents and purposes, that’s pretty much indefinitely. Researchers at the University of Southampton have developed a new technique that could allow up to 500TB of data to be written to a CD-sized “5D” glass disc. For comparison, CD-Rs store 650MB of data.

It’s a technology we’ve seen before back in 2016, also from the University of Southampton, and while the size of the glass has increased a little from that five-year-old effort, it overcomes a number of limitations it faced back then. The storage has been bumped up from 360TB and it’s much faster to write out the data to (one of the biggest limitations of the previous tech that made it impractical).

Researchers use a femtosecond  (1/1,000,000,000,000,000 of a second) laser that uses a phenomenon called near-field enhancement, rather than simply writing directly on the glass. And while the technology is faster than it was five years ago, it’s still certainly not fast by most peoples standards. When we’ve got SSDs that can write close to 1GB/sec, the ~225kB/sec that 5D can be written out feels like a bit of a snail’s pace.

That speed equates to 0.81 gigabytes per hour. Or around 583 gigabytes per month. At 225kb/sec, it would take around 72 years to write out 500TB of data, so yeah, while it’s faster than it was, it’s certainly not very speedy. The researchers believe, however, they believe they can bring this up into the tens of megabytes per second with the use of automatic polarisation imaging and more powerful decoding algorithms with almost 100% accuracy.

If they are able to get those sorts of speeds, then that would massively reduce the time it takes to write out the data. Bringing it up to 1MB/sec means that 500TB record time drops down from about 72 years to only 15 years. Going up to 10MB/sec brings it down to around 19 months. 100Mb/sec would be less than 2 months. 2 months (or 60 days) seems to be about their goal.

That’s still pretty slow, but when you consider the amount of data being generated every single day (and I’m not even thinking about social media), with several machines running in parallel, it might just be the future tech we need to keep humanity’s information preserved for all time. It can withstand temperatures up to 1,000°C and last for 13.8 billion years. And, well, it’s 500TB, so it’s not that inefficient.

Hopefully, one day, they’ll have a smaller version of this tech in a little black box we can buy for those of us only sitting on around 25-30TB of hard drives and SSDs. It sure would be nice to unload and free up some of that space. I wouldn’t expect it to be coming any time soon, though.

360TB Disc that lasts 13.8 Billion years. Is this the future of data storage?

« So stock photography is dead? Not according to these two photographers
Avoid these 7 common beginner landscape photography pitfalls »