This short, by filmmaker Paul Trillo, and praised by TIME Magazine as one of the 6 Most Innovative Drone Videos of 2016, just premiered on Vimeo Staff Picks. It’s a very bold concept. An almost 10 minute long short film shot in a single take. But this wasn’t like your typical long take. It was shot entirely with a drone.

Using the DJI Inspire 1 with Zenmuse X5 camera, Trillo and his team faced a lot of challenges creating the short. Timing & choreography, dialogue replacement, not to mention keeping the camera flying perfectly for so long to capture it all. And while an impressive technical triumph, it isn’t at the cost of the story.

Directed by Trillo, and produced by Aerobo, “At the End of the Cul-De-Sac” shows a man’s public mental breakdown. It also shows the slightly twisted response of his community within the street. The “community” reminds me a little of the movie High-Rise.

A shoot like this takes a lot of advanced planning and testing. Trillo and his team tested out several drone systems before deciding on the Inspire 1 & Zenmuse X5 camera. To figure out the flightpath for the drone, a animatic was used to see how it might work. Be warned, it also uses CG voices for the dialogue.

The folks at Aerobo were controlling the drone. A pilot flies the drone, and a second operator controls the camera independently. Working this way is fairly common for commercial work, but it takes a good team with great communication. A separate camera operator alongside the drone pilot also means that being able to concentrate on the shot. They don’t have to worry about if they’re going to fly into a tree or a fence.

One of the biggest challenges, though, seemed to come in post. Shooting from a drone, especially so close, you’re not going to get very clean dialogue. So, all of the voices had to be reenacted and recorded in the studio and then dubbed on over the original recording later. I’ve tried doing this before, and it’s a laborious task. An actor needs to re-speak their line perfectly with the right timing and intensity for it to match the original video.

They also went through many rehearsals on the day to get things just right. 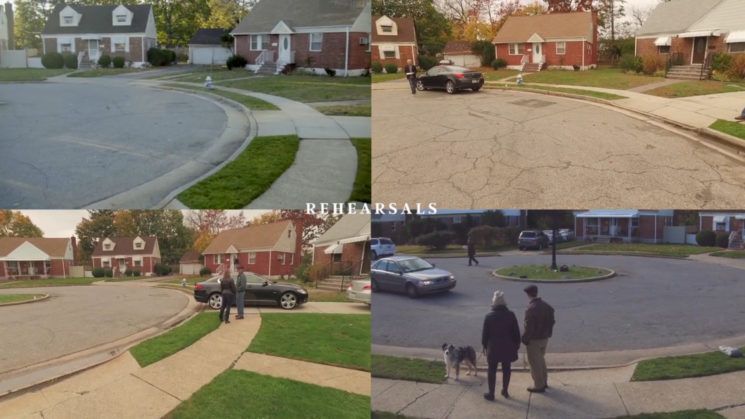 In the end, they decided that one of the rehearsal takes ended up being better than the main take. So, they used that rehearsal for the final film. But that, too was not without problems. Some props (set props, not drone props) failed and had to be recreated in post.

Trillo also released a behind the scenes “making of” video to show how it came together.

Just trying to attempt something like this is a pretty insane idea. But to actually go out and do it, and do it so well, is an achievement to be proud of.

It’s well worth the watch.

This eerie short film was lit by a 1,600W LED drone light