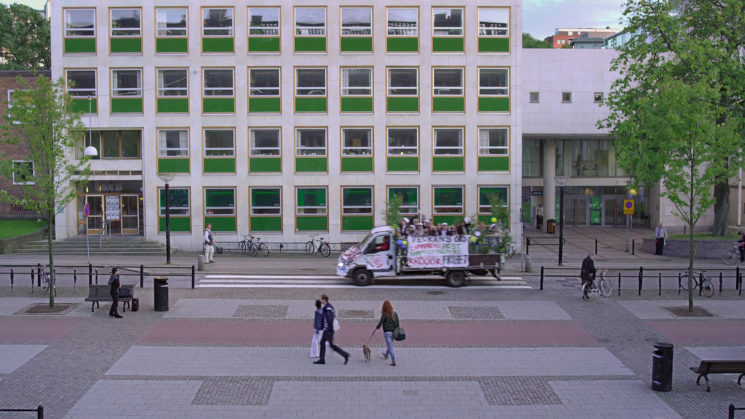 A One Shot Film, is a movie shot in one long take, by a single camera. Or, it’s cut in such a way as to give the impression that it was. There have only been twenty movies ever shot in a single long take. And another seven that have been edited to look as if they were.

While not feature length, this 12 minute short film written and directed by Ruben Östlund is an ambitious project. He made the most of what was then state-of-the-art 5K technology to shoot his main master shot. The pans and zooms were then created in post to move the viewer through the story.

The short is based on a real life event that Östlund experienced. He was on the way to secure funding for a film when he and producer Erik Hemmendorff witnessed an attempted robbery. They saw two men sitting on an idling moped wearing ski masks, and the events that followed led to this story’s creation. The short, Incident by a Bank, won the Golden Bear at Berlinale in 2010 and is now streaming worldwide exclusively on Vimeo.

Given that this was shot in 2009, before long takes really became a big thing, it’s a great final result. While it was all shot on a single camera from a single position, though, it was not all in a single take. There are four hidden cuts within the film.

I digitally zoomed up to 400% in the picture, but I think it works quite well [despite] the loss of quality. We did only 14 takes, which is not much for me. I usually do around 40 takes when I shoot. But I felt I had it when I was walking home [from set] that night.

It’s an interesting and unique way to present a story, and it’s done rather well. I never felt like I actually wanted the camera angle to change, or to cut to an alternate angle. It all just worked.

What’s quite amusing, though, is that while it was being shot, he had some extras film the “robbers” with their phones. That material was used as promotion for the film A few months later Östlund received a phone call from a friend. The friend said that has watching a show called “The Top Ten Dumbest Criminals in the World”. In 7th place, they used a clip one of these extras shot, claiming it to be authentic.

Head on over to the Vimeo Blog to read a bit more about what went into its creation and the story behind it. It just goes to show you don’t need a whole bunch of gear and fancy transitions to make a story work.

“Dreaming” is a 4K short film shot on the Nikon Z6

« This $11,000 lens is exactly why you don’t check camera gear when flying
How are you going to celebrate World Photography Day? »