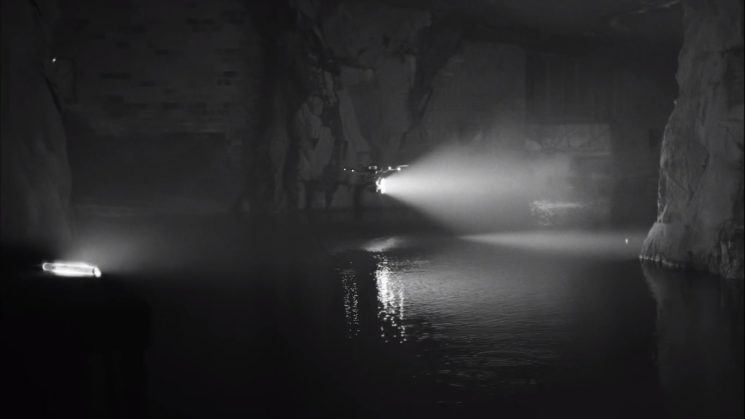 Drones give us a different perspective for shooting photos and video. But, they are also useful for adding light from totally new angles and for lighting inaccessible areas. In his latest short film The Place Where, filmmaker Tim Sessler mounted a 1,600W LED light onto a drone and created a moody masterpiece.

Tim writes that he discovered an amazing, eerie mine with water and beautiful reflections. He took some photos there, but it was so dark that he had to shoot at 1-2 second exposures. Half a year later, he revisited the place with his team, this time with a RED Monstro camera, some powerful lights, and a drone.

For shooting inside the mine, the team used an 800W LED light ball that they built earlier, and a 400W LED drone light, and there was some daylight coming through a large opening. The drone light is remote controlled on a MoVI and flown on the ALTA 6. Outside the cave, the team used a super-bright 1,600W drone light rig. Tim writes that it’s “possibly the brightest drone light that currently exists.”

The cave is a very tight space, with water both below the drone and dripping from the ceiling. This makes it a very challenging location to fly a drone, but the team managed to pull it off. Both inside and outside, the drone-mounted bright lights create an eerie, almost supernatural feel. And the end result is simply stunning.

Other than the film itself, Tim has also shared a short BTS video:

You might remember another Tim’s short film Balance, which DIYP featured a while ago. You can check out more of Tim’s work on his website, and make sure to follow him on Vimeo and Instagram.