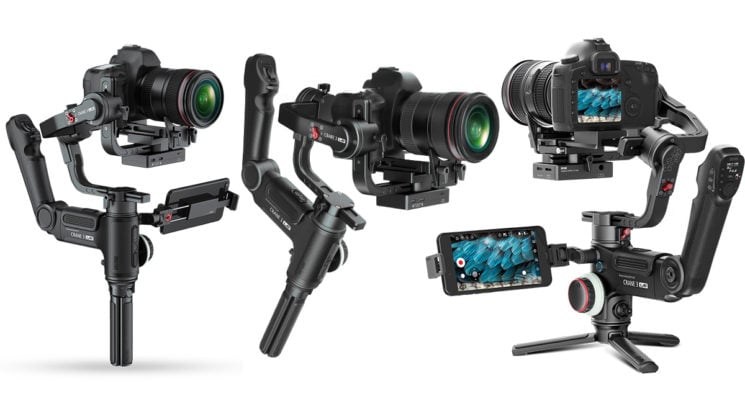 Although it’s been teased for a few weeks, Zhiyun has now officially announced the new Crane 3 LAB 3-axis motorised gimbal stabiliser, along with complete specs. Lens adjustments have been expanded to include zooming as well as focus, it features a new articulated handgrip, and it can stream 1080p video to your mobile device for remote monitoring and control.

The Crane 3 LAB is the latest of two new gimbals from Zhiyun. “LAB” is Zhiyun’s name for their most premium of gimbals they make. The LAB series kicks off with this and the somewhat smaller WEEBILL LAB.

The Crane 3 LAB offers some significant advantages over the Crane 2. You don’t have to buy a separate dual handle to get more stability while handholding. It has a place to mount a phone for monitoring and control, and it’s had a bit of a load capacity increase. The Crane 3 LAB also comes with a drastically different design which should, in theory, make it a lot easier to carry the gimbal. Especially “underslung”. 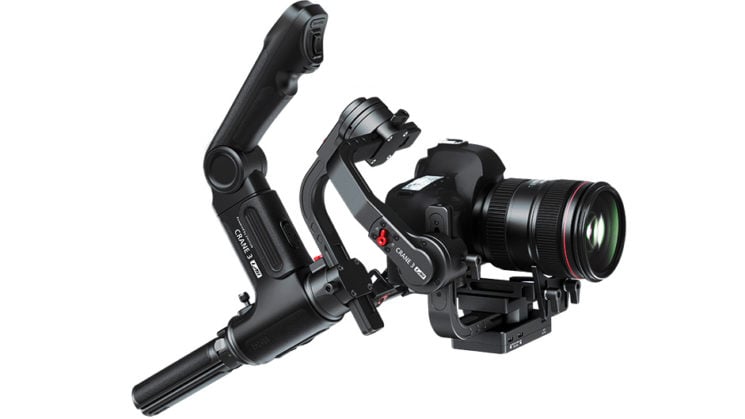 The handle sticking out the side was inspired, Zhiyun says, by the control sticks of aircraft cockpits. Multiple buttons and thumbwheels allow easy access to a variety of settings, switch modes, and control the camera. This part of the handle also houses the OLED display first introduced with the Crane 2.

But let’s have a quick look at some of the specs and features.

One cool feature of the Crane 3 LAB is that you can temporarily lock off axes while balancing the gimbal. So, while you’re fixing your pitch, you don’t have to worry about it flopping from side to side. Just lock the roll, set your pitch balance, and then unlock the roll and balance that. Although the Crane 2 and similar gimbals aren’t that difficult to balance, this should make life much easier.

Overall, the Crane 3 LAB offers a lot to potentially get excited about. I’ve been using the Zhiyun Crane 2 for a little under a year now, and while it’s easily my favourite gimbal I’ve used, it’s not perfect. The Crane 3 LAB is a massive overhaul of the entire design. Whether that new design will make a filmmaker’s life easier or more cumbersome remains to be seen. But I’d be interested to try one of these side-by-side against the Crane 2 to really compare.

The Zhiyun Crane 3 LAB is available to pre-order now for $899 and ships on November 19th. This does not include the follow focus & zoom units. These will be included in Creator Package and Master Package coming in the future for $1,199 and $1,299 respectively. You can find out more on the Zhiyun website.

Tips for shooting cinematic footage with the Zhiyun Crane 3 LAB

Unboxing and first look of the Zhiyun Crane 3 LAB