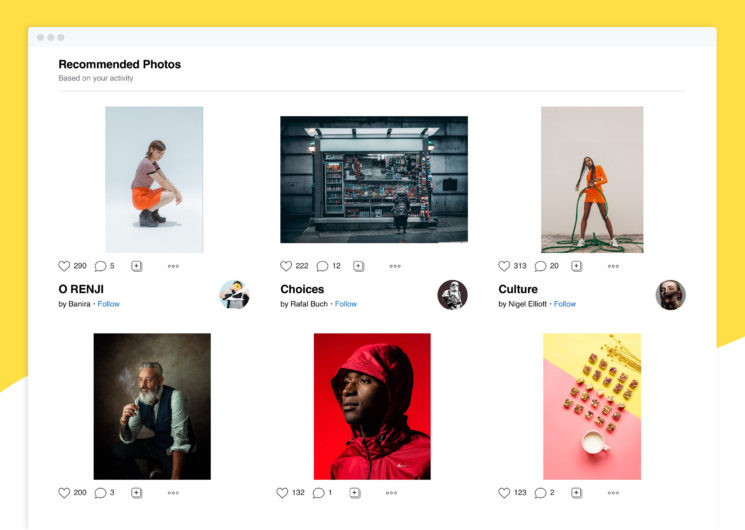 500px has introduced some changes to its web and mobile platforms. According to the company, it should increase the exposure for photographers, but judging from the comments – the photographers don’t seem to be happy with the redesign.

The 500px team writes that “great content should speak for itself,” so they changed the platform to reflect that. The design is “inspired by photobooks,” and it’s cleaner and more contemporary, according to 500px blog. However, it looks more like Tumblr, if you ask me. The users describe it as “awful” and many of them have asked if it’s possible to return to the previous layout.

In addition to the new look, you there is a new publishing feature for Galleries. You can add photos to your existing Gallery and share it with your followers when you’re ready, both on web and mobile. Also, to comply with the terms and conditions of App Store and Google Play Store, the 500px mobile app will not show NSFW content.

It looks like the main goal of the new look is to let users explore more photos and promote photographers on the platform. The algorithm now recommends photos from users you don’t follow, with predictions based on the ones you do. Since the number of daily uploads is high, 500px believes that this will help distribute exposure more evenly. However, users complain that now it’s more difficult to see the images from the people they follow since there are now more “Recommended photos” appearing in the feed.

Judging from the comments I read online, many people have left 500px even before the changes were made. Many of them (including me) did it after 500px was sold to Visual China Group, a.k.a. “the Getty of China.” Our survey showed back then that 50% of readers were about to delete their accounts, while 7.55% weren’t, with those in between who were indecisive.

While reading comments about the new look, I couldn’t find a single positive one. I believe that there are people who do like the changes, though; they just usually aren’t the loud ones. And what do you think? Do you like the changes or not?

« Can you really get good commercial photography for $19?
Zhiyun officially announces the Crane 3 LAB gimbal with wireless HD image transmission »