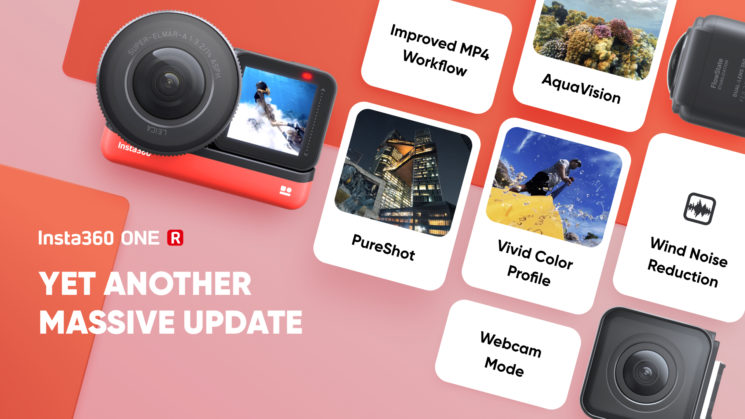 Insta360 has posted a massive feature update today for the Insta360 ONE R. It expands the camera’s capabilities with several new features to offer new shooting modes, speed up your workflow and improve image quality and colour. Today’s update also comes with two very big (constantly asked for) features, too. You can now use the Insta360 ONE R as a USB webcam, and you can also live stream 360° video to YouTube and Facebook.

The three highlight features are the webcam, live streaming and mp4 workflow. And they’re a big deal. Users have been begging for webcam and live streaming capabilities in the ONE R ever since its initial release and I regularly see people posting in the Insta360 groups on Facebook complaining about the time it takes to transcode and export footage.

The Insta360 ONE R acts as a 1080p HD webcam for all the usual things you’d use a webcam for. Conferencing through Skype or Zoom, for example, or bringing into OBS to stream your camera to the world. They don’t mention the 1-Inch Mod, but when you’re using the 4K Wide Angle Mod, they say it detects how many subjects are in the frame and adjusts the zoom level accordingly. And if you’re using the 360 Mod, there’s a split-screen mode that allows you to show both front and rear views simultaneously.

This one’s a biggy. This was a popular feature of the Insta360 ONE X as well as many other 360° cameras on the market today, but until now the ONE R couldn’t do it. There are two ways to stream. The first is 360 Live – which streams out a 360 signal that your viewer can look around at will while the stream’s going. The second way is Reframe Live. This allows the streamer to adjust the camera’s viewpoint and stream out a standard flat video signal and the viewer sees only what the streamer wants to show them.

The 4K Wide Angle Mod and the 1-Inch Mod now default to mp4 for video, which means there’s no longer any kind of conversion needed in order to use them in your regular editing application. Stabilisation has also received an update, offering “Basic” and “Pro” levels when you shoot. Basic is a “quickfire, no editing solution” with basic stabilisation that all happens in-camera. Essentially, you shoot it and you go straight to editing. Nothing else to do.  The “Pro” mode opens up all of the other options, the standard set that ONE R users are used to, and lets you get the full power of gimbal-like FlowState stabilisation either in the app or Insta360 Studio on the desktop.

The update provides improved wind reduction to help produce clearer sound in harsh shooting environments (particularly handy here in Scotland) and adds compatibility for users to perform voice controls with AirPods over Bluetooth so that you can start and stop recording or shoot photos at a distance from your camera.

The new AquaVision is an AI effect applied in post to your underwater footage to help compensate for the loss of light at certain wavelengths – particularly red. Its goal is to help you correct your footage without having to resort to filters or lots of hours manually spent correcting in your editing software.

Designed for use when you’re going straight from the camera to publishing with little-to-no editing, the Vivid colour profile is intended to help make your footage pop right out of the camera.

Other updates include a new Final Cut Pro X plugin for more streamlined editing for Mac users, adding to the existing Premiere Pro plugin. I really hope they can sort out a DaVinci Resolve plugin one day. New AI Shot Lab templates have been added to the smartphone app, too.

The new Insta360 ONE R update is an app/firmware combo and should start appearing in App & Play Stores around the world throughout the course of the day. Or you can download (some of) them from the Insta360 website.

Right, time for me to update mine and see if it can replace my crappy old Logitech webcam on the desktop!