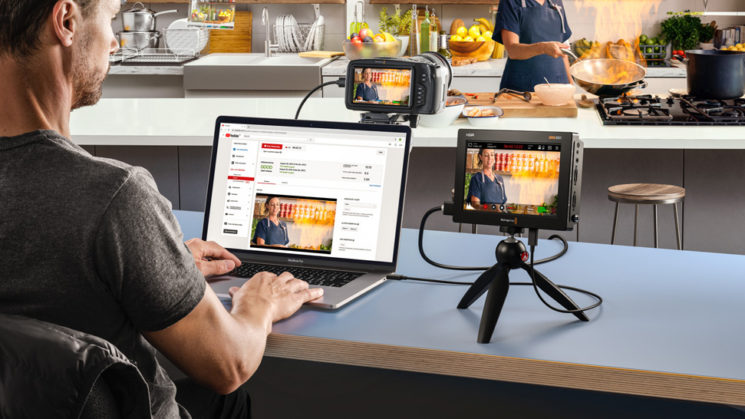 Well, this is interesting. With all the talk of cameras getting firmware updates this year in order to give them the capability to be used as a webcam, we’ve forgotten all about the other devices into which you can plug them. Devices like monitor recorders.

Blackmagic has released a new firmware update for its Video Assist monitors allowing you to use them as regular USB capture devices (like a webcam) over its Type-C connection. So, if you’ve got a Blackmagic Video Assist monitor, it doesn’t matter whether your camera has this feature or not anymore.

The new update works with both Video Assist 3G and Video Assist 12G HDR models allowing you to connect them to your Mac or Windows PC and access them just like any other webcam in all your usual software (Zoom, Skype, Facebook Live, YouTube Live, OBS, etc) in up to 1080p resolution.

What’s more, the monitor can act as a webcam regardless of whether your camera’s signal is HDMI or SDI. So, you can use this with any camera you can normally hook up to to the Video Assist for either monitoring or recording internally.

The press release does talk about some of the features of the Video Assist monitors – like the 12G’s ability to record BRAW internally – but there’s no mention of whether or not it can record while acting as a webcam. If you can, that’s pretty awesome for the Facebook and YouTube live streamers, because you’d be able to record a high-quality BRAW (or 10-Bit ProRes or DNx) version for editing and uploading later without having to waste your computer’s resources to record during the live stream. .

Update: Blackmagic has gotten back to us and yes, it will still record internally while acting as a USB capture device!