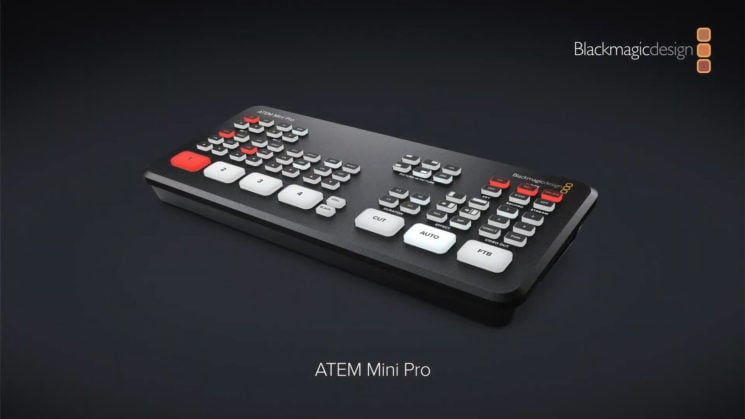 Blackmagic Design has just announced the new Atem Mini Pro, a streaming-focused update to the popular live streaming switcher announced at IBC last year. To go along with it, the Blackmagic Camera 6.9 update for the Pocket 4K and Pocket 6K adds direct support for the Atem Mini Pro, letting you remotely control and match up to four of the cameras from the new live production switcher.

Blackmagic CEO and co-founder, Grant Petty went on a live stream earlier to make the new announcements. If you haven’t seen the Atem Mini yet, Grant goes into a pretty in-depth overview of what the original does before talking about the new Atem Mini Pro about 15 minutes in.

The Atem Mini has proven to be very popular since it was announced in only September last year. So much so, that it seems virtually impossible to find one available anywhere now. That is potentially down to the manufacturing and shipping issues faced by much of the world at the moment, or perhaps they simply didn’t anticipate the demand. Or, just maybe they were attempting to build up that demand in anticipation of the new Atem Mini Pro instead based on the original’s success?

Anyway, the Atem Mini Pro is here, and the Atem Mini is not going away. Both units are still listed on the Blackmagic website, and it wouldn’t really make sense to obsolete a product only a few months after its release. The new Atem Mini Pro offers all of the same features as the original but includes some very nice extras that make the unit much more functional and useful for serious live production streamers. Extras like direct streaming without a PC and the ability to record a local copy of your stream directly to a USB SSD. 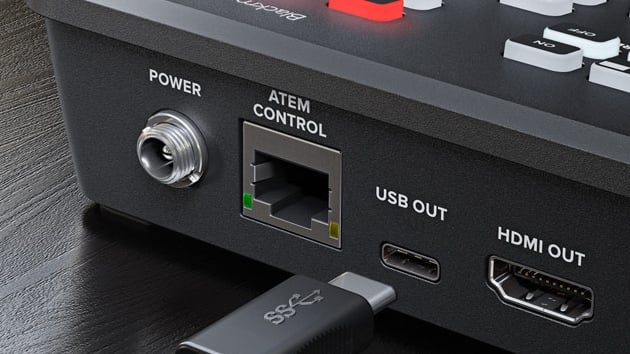 Although you’re still likely to have it connected to a computer in many situations, having the ability to stream directly means that you don’t need to use your computer’s resources, or worry about some other piece of software bogging those resources down affecting the quality of your stream. Depending on your needs, removing the computer entirely from the equation can be very handy.

So that you can still save a copy locally when not using a PC, the Atem Mini Pro allows you to record your stream directly to a USB flash drive or SSD. It saves out in h.264 with AAC audio. The Atem Mini Pro only has a single USB port, so it looks like this option isn’t available when you do have the device connected to your computer.

One very cool feature of the Atem Mini Pro over the original Atem Mini is that you can actually previous all four cameras simultaneously from an external monitor, along with levels, status, preview and program windows. 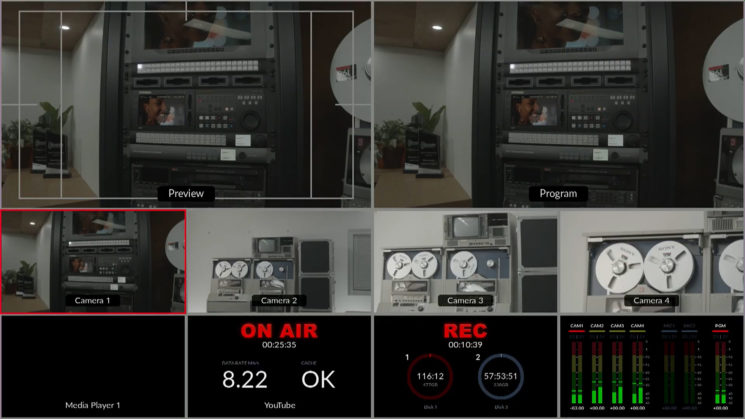 With the original Atem Mini, you’d need to feed each individual camera into a monitor with HDMI passthrough before sending it back out to the console, if you wanted to be able to monitor all four screens in realtime. A lot of people weren’t happy with the cost and hassle of this arrangement, and Blackmagic appears to have listened and brought a solution in the Atem Mini Pro.

As with the original, the Atem Mini Pro can convert just about any 720p, 1080p or 1080i signal you choose to feed into it into an appropriate output, but the new Blackmagic Camera 6.9 update for the Pocket 4K and Pocket 6K offers extra features, like remote control and matching of your cameras to keep some consistency from one camera angle to the next.

While the focus of the original Atem Mini was on just live switching in general, albeit somewhat limited without a built-in multi-screen preview, but the new Atem Mini Pro is specifically geared towards live streaming. You do have to pay quite significantly for these features, though. The Atem Mini Pro is about double the price of the Atem Mini, coming in at $595 over the original at $295.

At the time of the original Atem Mini’s release, I thought it was the perfect tool for live streamers – or at least, as perfect as one could get at the time given the budget. Now, yeah, I think it would be worth the cost to go for the Pro version for anybody serious about live streaming.