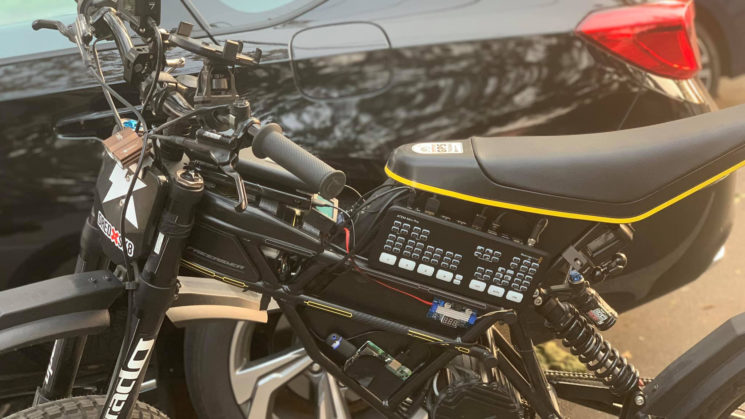 Sometimes, you see a project that’s just so cool and so out there that you just have to find out more. That was me when I saw the photo above from Rattanak Sorn.  Rattanak live streams his e-bike journeys to Facebook and it’s turned his bike into a self-sufficient multicam live streaming machine, complete with Raspberry Pi and an Atem Mini Pro.

Designed to go just about anywhere, Rattanak’s e-bike of choice is the Kuberg Freerider. According to the manufacturer’s website, it can “take on anything” and has a fair bit of power. It has a 14kW motor, weighs around 80lbs, a range of 30 miles and a top speed of 55 miles per hour. But simply riding the bike wasn’t enough for Rattanak, so he’s come up with a couple of ingenious setups for live-streaming his journeys from the road (or off-road if he chooses).

This setup, posted to Facebook, shows a handlebar-mounted Panasonic GH5 with a Logitech HD webcam capturing the rear view. Both of these are going into a Webcaster X2 live streaming encoder which in turn is going into a Mofi4500 hotspot connected to 4G streaming out 1080p video to Facebook at 8Mbps.

Power for a setup like this is often tricky. Rattanak mentions in the video that the GH5 is being powered externally from an NP-F970, which provides much longer life than an internal battery and is much easier to swap out in the event that you need to. Other devices are powered from USB power banks, and other batteries. Audio comes from the GH5 via a small Maker Hart mixer which also takes a music feed from his iPod, allowing him to combine the two.

Since posting his initial video, Rattanak posted a more recent version of the setup, which swaps out the Panasonic GH5 for a GoPro Hero 7 Black and adds a side-mounted Atem Mini Pro video switcher. This allows Rattanak to flick between cameras at will (when safe to do so, obviously) and composite a logo overlay image on top of his footage. He’s still using the Webcaster X2 and the Mofi 4500 to encode and stream out the signal to social media, but he’s also added a Raspberry Pi to generate that logo overlay image.

Electronics and DIY is Rattanak’s hobby, and he occasionally posts videos to his YouTube channel to document some of his experiments and tests. He also has a Facebook page called Mr LED’s Lab, dedicated to his e-bike and other electronics projects that’s worth checking out if you’re interested in that kind of thing.

It’s always fascinating to see how different people use certain equipment, but this isn’t a combination of gear, nor a use case, that I’d ever thought I’d see – even knowing how popular bicycle, e-bike and motorcycle videos are on YouTube. It’s a very cool setup and gives me a few ideas for streaming gear on location. I think my position will be somewhat stationary, though.