While we were at IBC 2019, we heard Blackmagic had a new toy for live streamers. The Blackmagic Atem Mini. It’s a four HDMI device switcher designed specifically for live streaming with multiple cameras or other devices with HDMI outputs. We went over to their stand during the show to check it out and find out more about it.

If you’ve ever tried live streaming some kind of presentation to a platform like YouTube or Facebook, you know what a pain it can be when you’re limited to just your phone, a webcam or, if you’re fancy, a single actual camera and an HDMI capture device. You often need to switch to different angles or close-ups, and you have to move the camera to do it.

Well, the Blackmagic Atem Mini is your solution to that. It’s a switching device which takes in four HDMI devices, allowing you to swap between them at will with the push of a button. It offers HDMI output if you want to go into a capture device, or you can USB out of it straight into your computer and it’ll see it like a webcam.

It features many of the tools of its larger and vastly more expensive siblings in the Atem range, like transitions, cuts, dips, wipes, luma, linear and chroma-keying, picture-in-picture and audio mixer. It accepts up to four 1080p 60fps 4:2:2 signals, and puts out 1080p 60fps 4:2:2 over its HDMI output socket. But it also has a Type-C USB socket on the back for connecting directly to your computer, which it sees like any regular webcam or capture device.

The HDMI inputs aren’t only available for cameras, either. You can plug consoles into it if you’re a game streamer or your computer if doing live DaVinci Resolve tutorials is more your thing.

For many streamers these days, their go-to is Elgato, with something like the Elgato 4K60 Pro, but when streaming platforms are only practical to use at 1080p anyway, for not much more money the Blackmagic Atem Mini seems like a much more attractive device. Especially when you consider you can run up to four cameras or devices on it.

Even looking at the relatively inexpensive Elgato Cam Link , which also supports only a single HDJI signal, you’d be paying over $400 for the same 4 HDMI inputs, but without the easy to use interface of the Atem Mini. Sure, you could try to bodge something together with OBS, but you’d still end up paying more money and a whole lot more setup time.

And as well as HDMI devices, there are also two microphone inputs. They’re 3.5mm microphone inputs, so if you want to use overhead shotguns just out of camera that require XLR and 48v phantom power, then you’ll probably need to route them through some kind of mixer. But if you’re using wireless lavs, with a 3.5mm cable on the receiver, you can just plug straight in.

I think when it comes time to replace the ageing HDMI capture card in my desktop, this’ll probably be what takes its place.

The Blackmagic Atem Mini is available to pre-order now for $295 and is shipping in November. You can see the full specs over on the Blackmagic website.

Update: Blackmagic has responded to us with regard to Rolf’s question below. They say that you can switch between “Audio Follows Video” on/off with the HDMI inputs to have it stick with one source or follow as you switch cameras. The ATEM Software Control Panel also contains a full mixer where you can individually control and mix all 8 HDMI audio channels, as well as the 4 channels of the two stereo audio inputs. 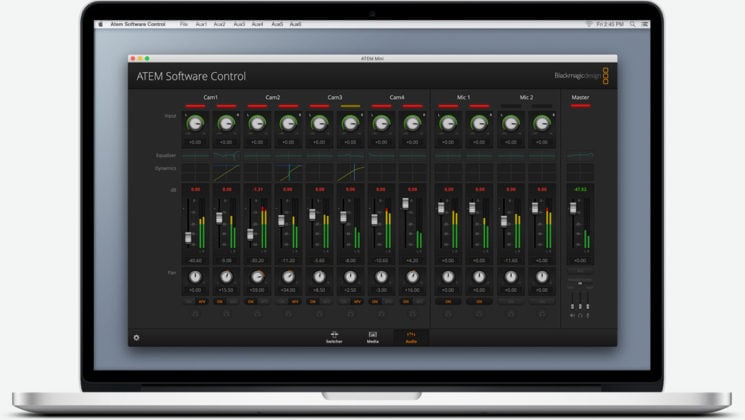 « Could iPhone 11 be the best camera phone currently in the market?
Sennheiser XSW-D microphones make it easy to get wireless audio into your cameras »