If you are like everyone else stuck at home, trying to live stream, you probably know about live switching. A switcher is a box that lets you control multiple cameras; The live part enables you to push the stream into Facebook or Youtube. Black magic has a basic ATEM mini for four cameras for $300. Now Feelworld has the LIVEPRO L1 – a four-camera switcher with a frigging LCD for the same price. 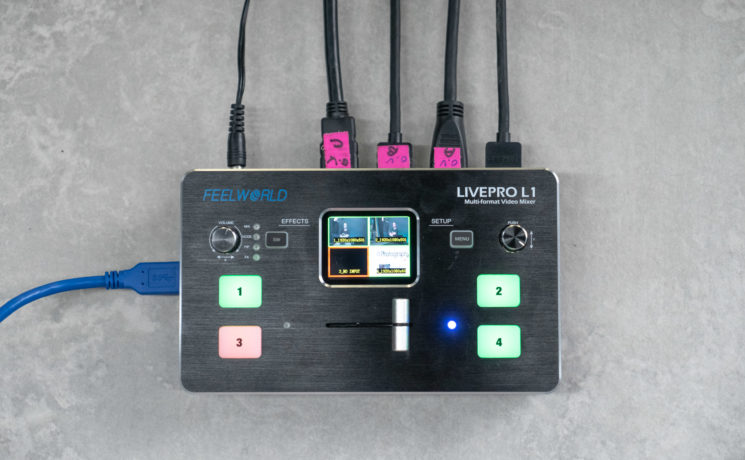 The box content is pretty basic. You get the swither, a USB-A to USB-A cable, a short HDMI cable, and a travel-friendly wall wart.

While I’d prefer a more common USB-C cable, I have zero complaints about the content. The switcher is nicely built. It’s not a tank, but it also doesn’t feel like it’s falling apart. The top is a piece of brushed black aluminum. There is no doubt that the star of the show is a 2″ TFT display that gives you a stamp-sized preview of all inputs.  Four buttons correspond to the four inputs, two knobs+small buttons for volume and menu control, and a T bar.

On the sides of the box, you’ll find an array of ports: 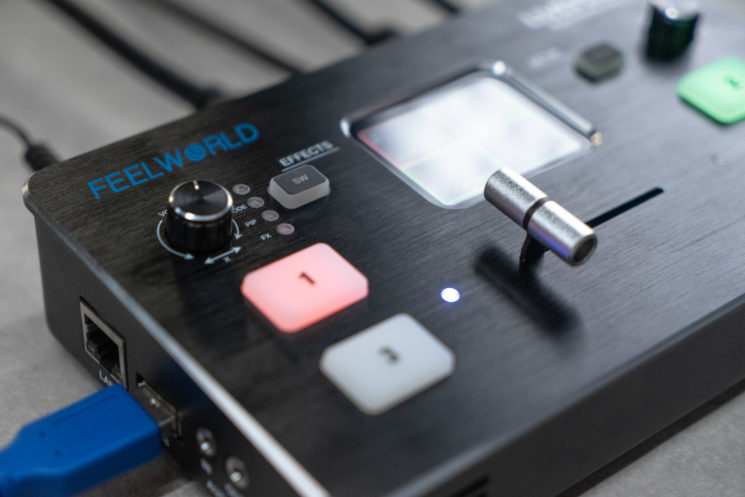 We started by connecting three cameras into three of the ports. You can also hook up a computer’s HDMI out into a port to have stream skype, youtube, or any other video you would typically stream from a laptop. Each of the HDMI ports can receive up to 1600X1200@60 FPS, and both the HDMI out and the USB-C can send up to 1920X1080@60 as well.

I wish I could dive into how I set the device up, but it was so simple that it does not warrant a section. Plug the power, plug the cameras, lag a laptop, and a monitor, and you are good to go.

One of the nice features that this device has is that you can output two different streams to the two available outputs. So you can have your program (live feed) go into OBS for streaming while displaying the preview via an HDMI monitor. This becomes handy if you want to control four cameras and see what is going on on each one.

The LCD can kinda give you general framing and is better than nothing. If you are on the road, I would say that it’s a great setup. But if you are at a small home studio, the L1 also allows for an external monitor is very handy. 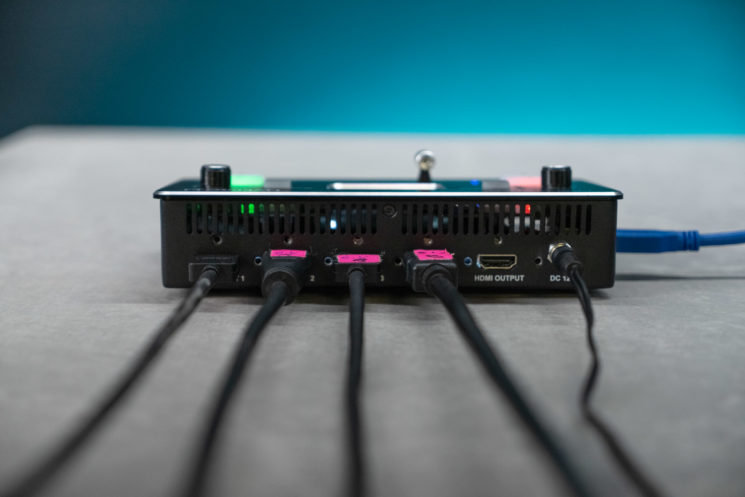 The first thing to do is to set the transition. You do with the effects button and the knobs. You can opt to use the T bar, and in this case, you will see a big preview of your “next camera”. Or you can simply cut between the four streams using the four buttons. If you opt for the T bar, most of the effects are very *cough cough* vintage. I would probably stay away from the zooms, swipes, and definitely the venation blinds.

A nice feature is the ability to use external audio via a 3.5mm jack. The L1 will then overlay this audio stream onto bot the HDMI and USB so you can get audio from a separate source. This is great for weddings and sports, but also for small studios where you have a microphone setup.

Lastly, the L1 support picture in picture. We gave this a quick test to see how it works. The fact that we could see and control four cameras, including PIP, transitions, and previews, without a laptop, is nothing short of amazing. 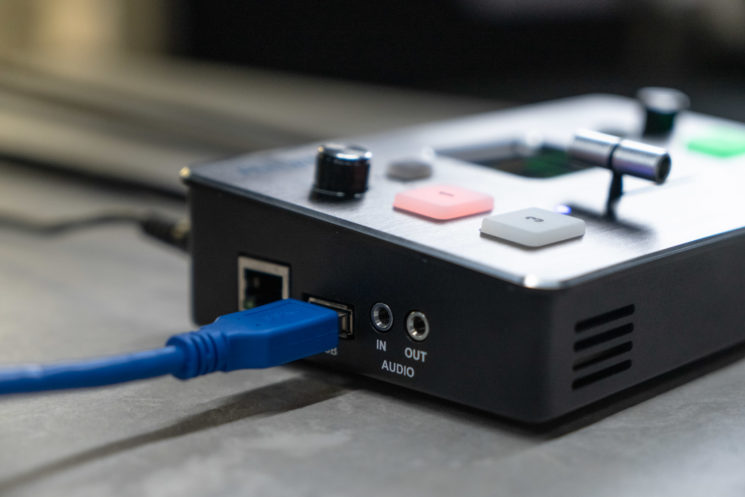 You would need a laptop to stream as you cant stream directly from the box. Once you hook the box via the USB cable, the computer recognizes it as a webcam, and the standard OBS streaming procedure applies.

The L1 does feature a LAN port that is currently used for control only. I wish that a firmware upgrade will give it the ability to stream directly; that would be amazing. Imagine that you’d just need this little box to stream four cameras.

When we tested the unit, the app was not yet available, so we could not test if the app can stream as well or just switch, stay tuned for updates on that.

I wish that the next version would have a USBC cable, which is less prone to be a critical piece of gear than a USB-A to USB-A cable. I did not try hooking the unit up from the USB-A on the L1 to a USB-C port on the computer, but I will try this and let you know.

I also wish that the L1 had a way to record into an external drive. You can always do this with OBS, but again, that requires you to have a laptop with you.

The fact that the L1 can juggle four cameras and have an LCD on it quite impressive. Units with similar features can go up to $900 and still have no LCD. Top that with a dual laptop/HDMI control stream, and the Feelworld L1 is an excellent unit for $300.