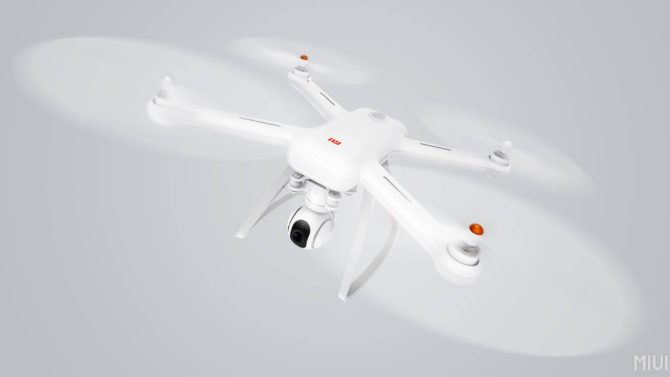 Xiaomi have been teasing us about their foray into the drone market for a little while now.  Now they have officially announced the Mi Drone, a 4K quadcopter which also shoots RAW stills, for a mere $460.

Boasting an array of impressive features, the Chinese electronics company looks all set to take on the big boys at a fraction of the price.

If the $460 price tag doesn’t already make it one of the least expensive drones in its class, a $380 1080p version is also planned.  This makes them even cheaper than DJI’s previous generation of Phantom 3 drones, which currently stand at around $600 for the 4K model, and $490 for the 2.7K version.

Xiaomi live streamed the event across several online platforms, but for those that missed it, Hugo Barra’s unboxing video, going through the Mi Drone’s features has been uploaded to YouTube.  It’s not a short video, so be prepared to sit back and relax for a while.

So let’s get some of the technical specs out of the way first.

Immediately, two things jump out as being missing.  Collision avoidance, and a “follow” mode.

Personally, I’m not that bothered about collision avoidance.  It would be a handy feature, sure, but when it comes to safety, I still think it’s better to just use some common sense and learn how to fly it safely.  Better to do that than to take stupid risks and hope the software covers your backside when the worst is about to happen.

The lack of a “follow” mode, however, would be a big deal for me.  Being able to circle an object on the ground might be a nice compromise for the kinds of shots I’d need a follow mode for, but I can see it not being a realistic alternative for many. 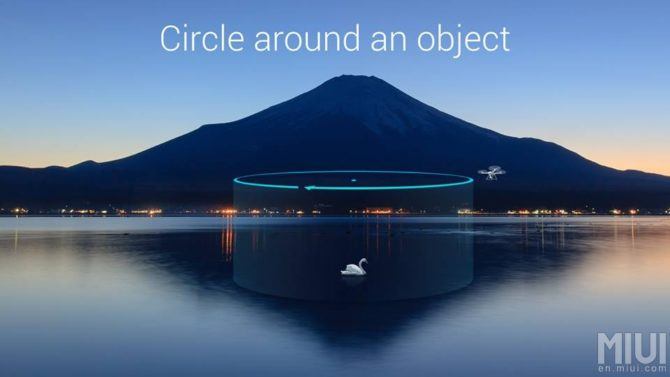 A follow mode would possibly just mean an update to the firmware, though, so we can’t rule out that this feature may be added in the future (and I really hope they do!).

What’s very impressive for me in such an inexpensive drone is the quality of the gimbal.  Capable of correcting 3-axis and handling up to 2,000 vibrations per second, it seems to offer near flawless stabilisation.

Now, you’re obviously not going to get the kind of quality you’d expect from something like a DSLR mounted to a DJI Matrice with a Ronin-MX, but you’re also not paying out the same kind of money, either. 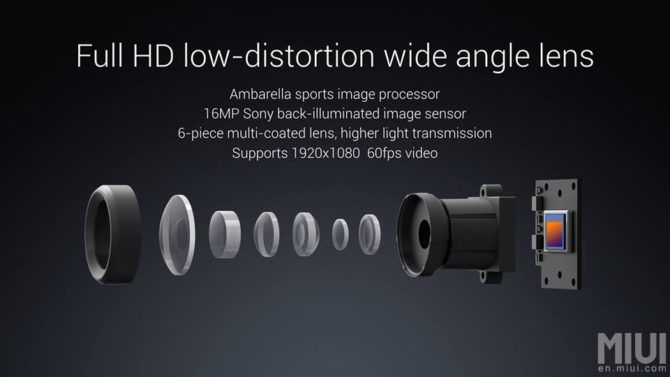 Coming in at less than the price of a GoPro Hero4 Black (which can’t fly without help), the quality of footage from this drone does, however, seems to hold up quite well.  That being said, so far all we’ve seen are 720p and 1080p samples from a camera that purports to shoot 4K.  So, I’ll reserve my final judgement on quality until we see some actual 4K footage shot by it. 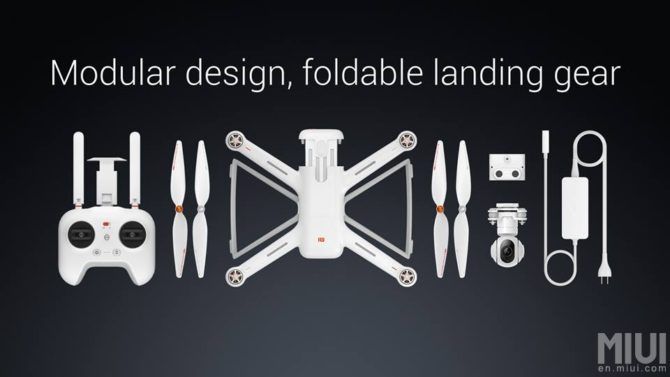 The modular design of the Mi Drone and folding landing gear means that it should be very easy to pack up and transport, overcoming a big problem with some drone models out there.  What good is it if you can’t easily take it out to the places you really want to shoot?

Packing away into a backpack (which doesn’t appear to be included, but I may be wrong), this lightweight drone should be easy to lug around all day. 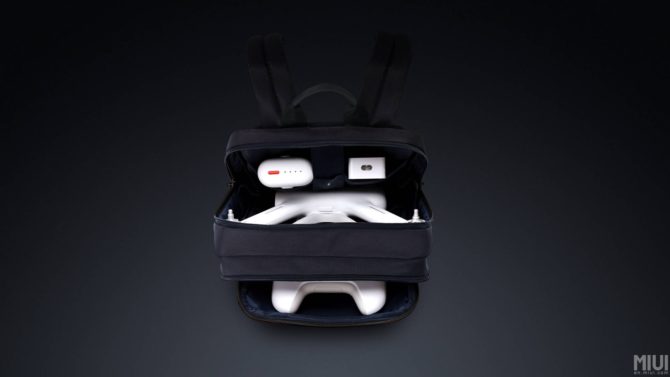 One obviously desired feature is that of streaming video to the controller.  Not being able to see what you’re recording can make things very difficult when you’re trying to line up a shot or track a moving subject. 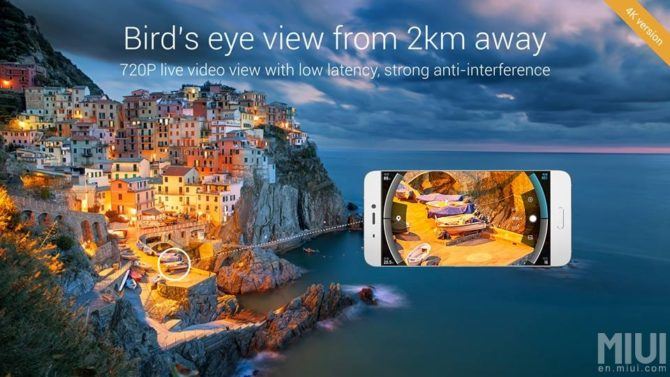 The promotional images and videos all show the feature being demonstrated with an Android device and I’ve not heard confirmation either way, but hopefully iPhone support will also be there.  Given Xiaomi’s dedication to Android with its other products, Apple users may be disappointed.

For the safety conscious, the Mi Drone also comes with propeller guards.  Whether these are to protect the propellers in the event of a collision, or to protect your your subject should you choose to fly it into their head isn’t clear.  But it’s a nice touch, and hopefully one that proves to be effective. 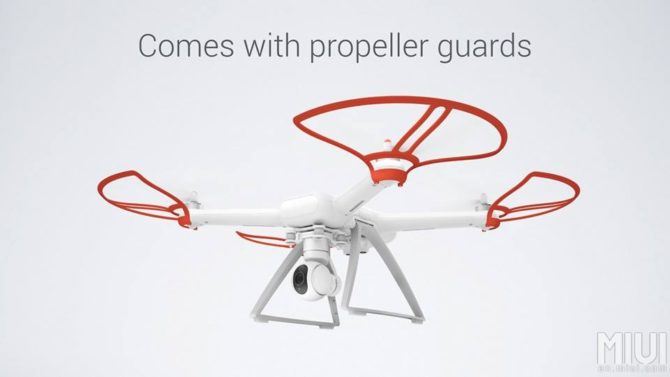 With waypoint flight path planning, tap-to-fly on a map, automatic take-off and landing, realtime location tracking, return home and remote low battery detection, and up 27 minutes of flying on a single charge, it seems to tick all of the boxes for a drone in this class. 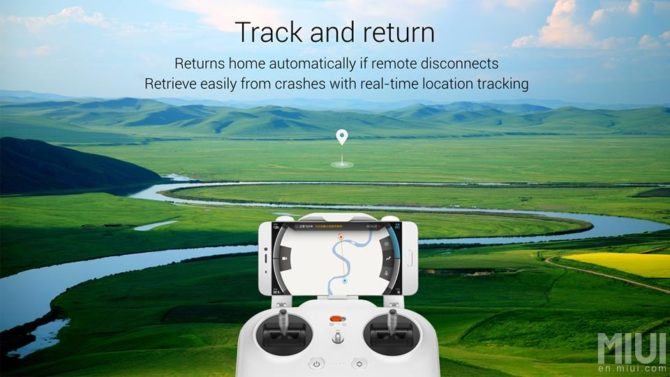 With a price of only $460 for the 4K version and $380 for the 1080p version, Xiaomi are seriously lowering the barrier to entry into the world of aerial cinematography.

The 4K Model of the Mi Drone will enter public beta sometime at the end of July.  The 1080p model will run a crowd funding campaign shortly thereafter.

Sites like Banggood already have a “Xiaomi Mi Drone” listed as “Coming soon” in their online store.  Since Xiomi says that at least the 1080p version (which Banggood have labelled as “2K”) will be crowd funded, I am not sure how that would work.

What do you think?  Has the Mi Drone’s price got you interested in joining the drone owners club?  Or does the low price put you off, worried that it just won’t be able to do the job as well as a fancy Phantom 4?  Let us know in the comments.

[Miui via No Film School]