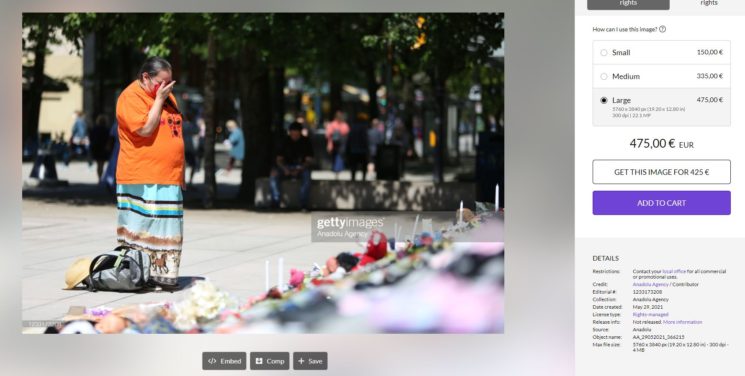 A Canada woman came across a photo of her mother mourning at one of the memorials for Indigenous children in the country. Discovering that the photo is sold and licensed through Getty Images, the woman raised concern and is even thinking of taking legal action.

Back in May, the remains of 215 Indigenous children were discovered at a former residential school in British Columbia. Last month, 751 unmarked graves were discovered in Saskatchewan. Following the heartbreaking discoveries, memorials honoring these children have been established across the country.

Sunset John from Prince George saw the photo of her mother, Loretta John. grieving at the memorial in British Columbia. The photo was taken by photographer Mert Alper Dervis of Anadolu Agency back in May. It’s now licensed by Getty Images, selling for up to €475 (around $560).

Loretta told CKPG that her co-worker first brought her attention to the photo when they saw it online. “I went to work that evening, I work with Lu’ma Native Housing and Marginal Housing, and my co-worker goes ‘oh that’s a good picture of you,’” she said. “I’m like ‘I don’t know what picture,’ and then they showed me.”

Neither mother nor daughter was thrilled to see the image online. They were even less thrilled to see it sold online. “I just feel like she didn’t know and nobody asked her, and she was just really in an awful moment and place at the time,” said John. “She wouldn’t have [minded] it being taken, but she just doesn’t like that it’s being sold and that they’re exploiting off our trauma,” she added.

Getty Images issued a statement to CKPG addressing Sunset’s and Loretta’s concerns. They point out that the image is available for editorial use only and can’t be used for commercial purposes:

“At Getty Images we have a responsibility to provide faithful and comprehensive documentation of the events that we cover, and we do not take lightly the decision to publish this and other similar images.

As you have noted, the discovery of unmarked graves of indigenous children at Canadian residential schools is newsworthy and of public interest. We understand that the woman in the image may be uncomfortable with how her personal experience, and what she may have regarded as a personal moment, has intersected with the public interest but it is undeniably newsworthy and that is why the photographer from Anadolu Agency made the images and we licensed them to our client news outlets.

This image is available for editorial use only, meaning that the persons depicted within have not provided a commercial release, it cannot be used for commercial or merchandising use and may only be used in connection with events or topics that are newsworthy or of general public interest.

Our editorial photography and footage informs people, public policy, services and markets. We always endeavor to maintain the balance of an individual’s right to privacy with our obligation to cover the story in the public interest of exposing difficult issues.”

Sunset said that her mother even considers taking legal action. However, lawyer Dick Byl isn’t confident that she could win the case. I’m not a lawyer, but even I can confirm it. Byl argues that the photo was taken at a public place and used in the public interest, so there is no ground for a lawsuit. “The law has been rapidly developing in Canada over the course of 20 to 25 years as technology has developed. One of those exceptions of course is matters of legitimate public interest, or crowds, or things of this sort,” he said.

“It’s a beautiful picture, but you know that’s not that point. The point was that I was in a prayer for these little children,” Loretta said. She and Sunset said that they didn’t mind that the photo was taken, but that nobody asked Loretta for permission. They also wish that the money made off of the picture would go towards supporting Indigenous groups. “I get that they have a job, they need to pay their bills, stuff like that,” said Sunset. “It’s just that I have mixed emotions about it. Mixed feelings,” she concluded.

On the one hand, I understand that you may not feel comfortable seeing yourself in a photo sold online, even just for editorial purposes. But on the other – there’s really not much you can do here. The photo was taken in a public place, it’s used in the public interest and for editorial purposes only. In fact, the woman in the photo isn’t even entirely recognizable since she is covering her face. So, if Sunset and Loretta Jones decide to file a lawsuit, I’m pretty sure that it will be in vain.