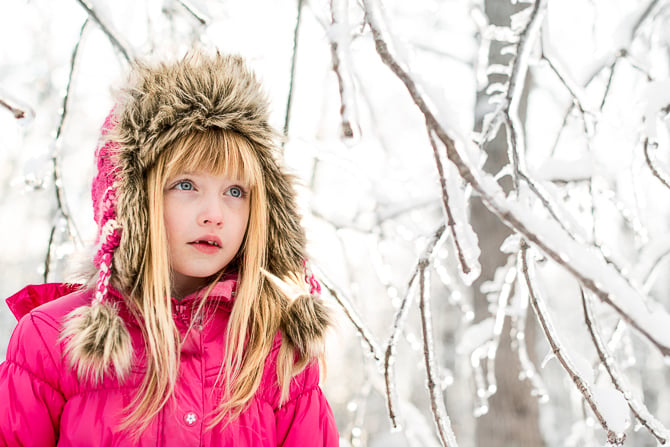 In order to celebrate the unholy amount of snow that just fell on my neighbors in Buffalo and Western New York (how does two meters or six feet of snow in November sound to ya?), I thought I’d share a few of the stories behind some of my favorite winter photos.

When it’s cold and snowy, it can be hard to find the motivation to pull your camera out, so hopefully the stories behind these photos might inspire a few winter photography moments.  Because, winter is coming.

Do You Have Any Winter Work?

Last fall I was speaking to an editor from an outdoor lifestyle magazine and we got into a bit of a portfolio review.  When he got to the end, his first question was: Where is your winter work?

Good question, because I had a couple winterish photos, but he was right – the majority of my portfolio was spring, summer and fall – times when its easy to pull out the camera.

So last winter, I made a deliberate effort to get out and add some winter photography to my portfolio – these are the stories behind some of those photos. 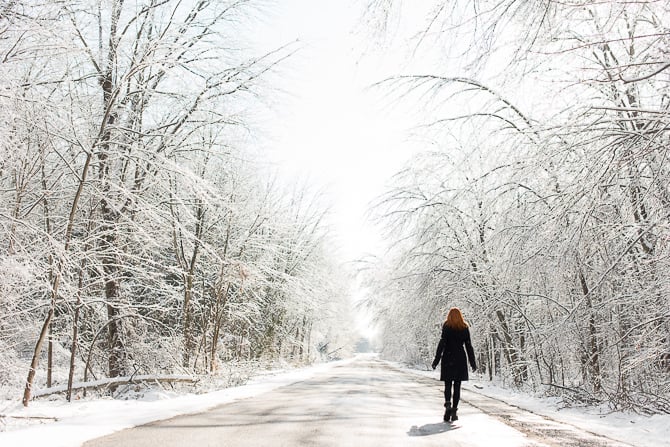 This photo and the lead photo are two of my favorite images from last winter.  The first is my daughter, the second is my wife.  Both were taken after a big ice storm that knocked out our power for several days.  But what makes them special to me is that they were taken while we were on the way to the out-laws for Christmas dinner.

It was a total spur of the moment decision to pull over and convince the family to get out of the car and trudge around in the cold for a half hour, but everything came together at just the right moment: the ice on the trees, the light, the crisp fresh snow, we were all dressed nicely for Christmas dinner and I had my camera in the back ready for Christmas photos.  I call this series “Ice Gingers in Their Natural Habitat” and photos from this series have turned out to be some of my best selling stock photography.

I wrote about this series before in a little more detail here. 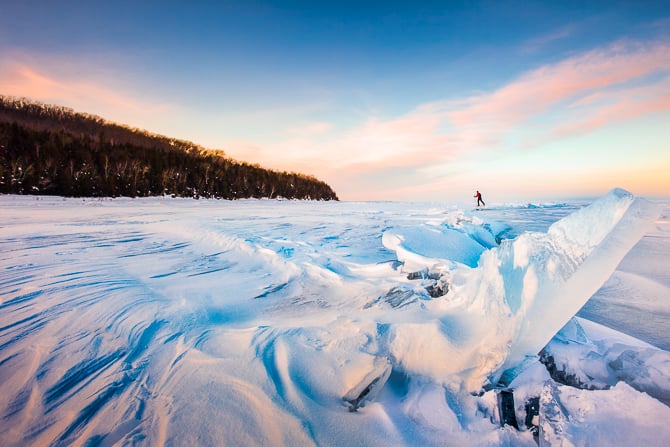 Does this photo look cold to you?  Because I can assure you – it was cold.  Really cold.  That’s me cross country skiing out there in the distance.  If you look really really closely, you’ll notice that I’m not wearing a coat, hat or mitts – because at the time I though the photo would look better without them.  I had been out on the ice all day filming time lapse content for our review of the Actobotics slider and in the early twilight this really awesome light just washed over the landscape – so I set the camera to take a photo every ten seconds and went and skied around a bit.

This photo was just licensed to Canon, so it is nice to know that a little spontaneity paid off.

I wrote a little bit more about the story behind this photo here. 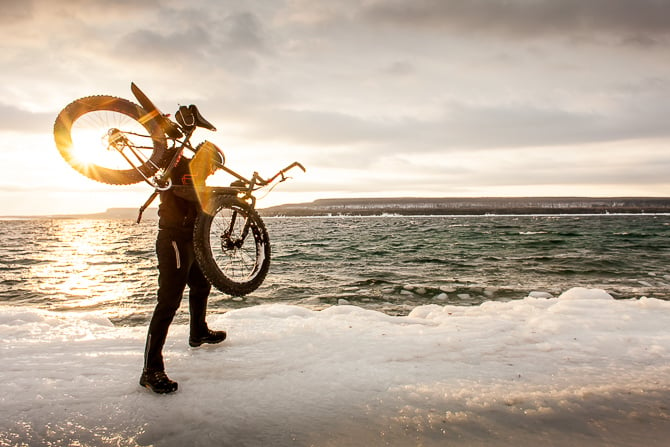 This is my favorite photo from what I call “The Frozen Tundra Mountain Biking Expedition”.  Some days its hard to get out of bed before sunrise just to go take some pictures.  But to get this photo, I not only had to get up before dawn, I also had to go down to the lake where the wind was blowing the dog off the chain and covering both myself and my camera gear in a nice layer of ice spray (kind of like the big dragon in How To Train Your Dragon 2).

This is one of a handful of frames where the sun peaked out from behind the clouds for a few seconds – but as it turned out, that’s all we needed.

I wrote a whole summary of this shoot here. 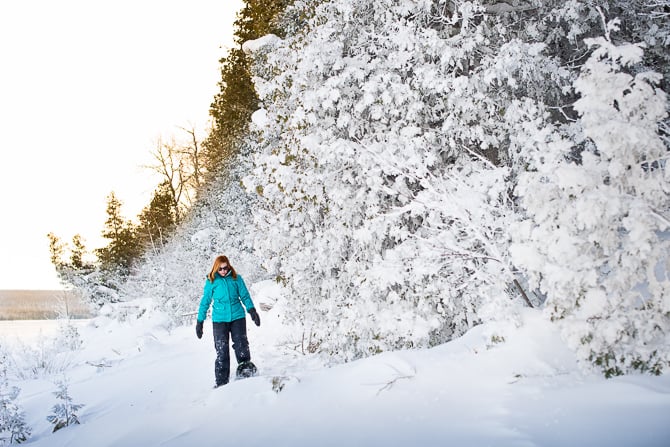 This is a photo of my wife snowshoeing on the beach at our family cottage in January.  What I really like about this photo is how the trees are covered with an almost fake looking dusting of ice and snow.  Add to that the late day sun that just warms up the background and adds an interesting warm / cool contrast to the image. 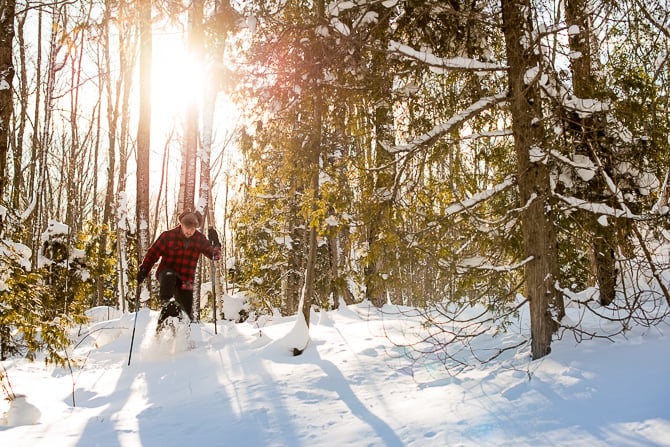 This is a photograph of me snowshoeing in the woods just as the sun is starting to set, as captured by my wife.  We set up this scene for a stock shoot which started out with my wife saying: “You don’t look Canadian enough”.

The obvious answer was to live up to our stereotype by putting on a red and black plaid lumberjack coat, a hoser fur hat and tromping around in the woods on snowshoes while speaking with a thick fake French Canadian accent. 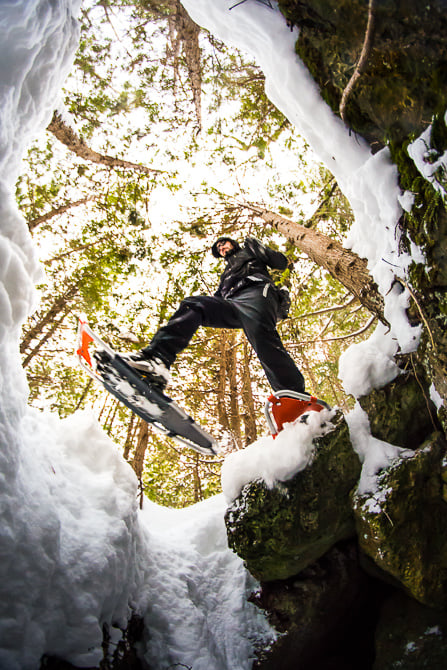 Another snowshoeing photo for a another stock shoot, except this time with a better looking model.

I was getting bored of the usual snowshoeing photos, so I had this bright idea that it would look really cool if I slid down into this small cave and photographed the model stepping over my head with a fisheye lens. 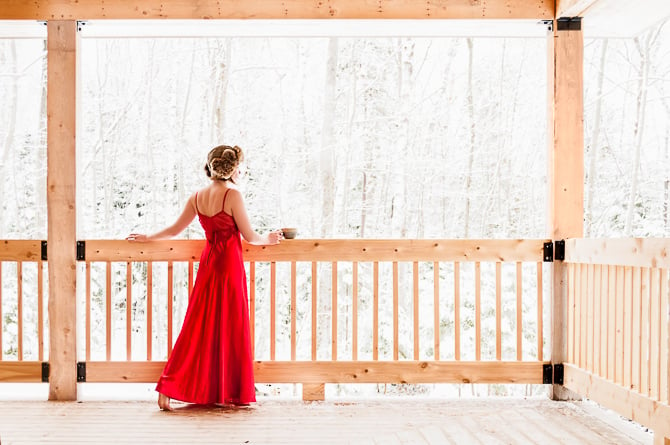 Finally, we have my favorite winter photo of all time.

This is my wife on an early snowy morning in February at the cottage.  The conversation that led up to this photo went something like this:

Me: “Wow, look at that light fluffy snow falling out there and the gorgeous light.”

Wife: “Ya, its nice (sensing what is coming next).”

Me: “So…if you could just go ahead and put this fur hat on, take this cup of coffee and go stand out there by the railing in your bare feet while wearing a night gown…that would be great.”

As you can tell from the photo, she did eventually agree – I believe the cost of this image was stacking wood and cooking French toast, so I think it was totally worth it.

What Is Your Favorite Winter Photo?

If you have any favorite winter photos that stand out in your mind, please leave a comment below and share the story!

Imitation and inspiration: All of Photography is a Remix

« Sony A7II Announced But Only In Japan
Is It Ever Okay To Add A Lens Flare In Photoshop? Yes, And Here’s How To Do It »