Every once in a while it’s nice to get a wakeup call that reminds you how much of photography is really just standing in front of more interesting stuff (quote courtesy of Mr. Jim Richardson – because when you’re this good they call you mister).

So the other day, whilst discussing my quest to photograph more interesting stuff, a good friend of mine says: “Hey – do you want to take some fat bike photos?”

First question: “What the heck is a fat bike?”

Second question: “Where are we going to photograph you riding a bike? Its January and there’s a foot of snow outside. 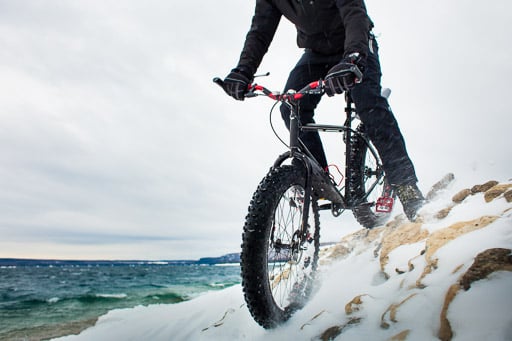 Well, as it turns out, a fat bike is a type of mountain bike that has frickin’ huge tires, which means that it is designed to be ridden in the snow…oh, and apparently our family cottage would be the perfect location so my buddy would require an invitation.

It’s fun to make plans for photographing winter extreme sports, because when the plan ultimately gets blown out the window (literally in this case), it’s fun to laugh about how ridiculously ambitious the plan was when you’re sitting around a toasty warm fire with a hot coffee and Bailey’s.

The “Fat Bike Photo Plan” was necessarily ambitious – pffffft mountain biking photos are a dime a dozen, but a fat bike in the snow – now that’s worth getting up at the crack of dawn.

(You might remember from previous articles that my wife’s name is Dawn – so waking to the crack of dawn has been a running joke with me since my inebriated cousin first cracked it during his speech at our wedding. I find it particularly humorous because I am not a morning person and I detest the crack of dawn.)

We checked star charts, plotted the direction and time of sunrise, sketched out a half dozen concepts, made our shot list, planned the gear requirements for each shot and discussed fat bike stunts in detail. 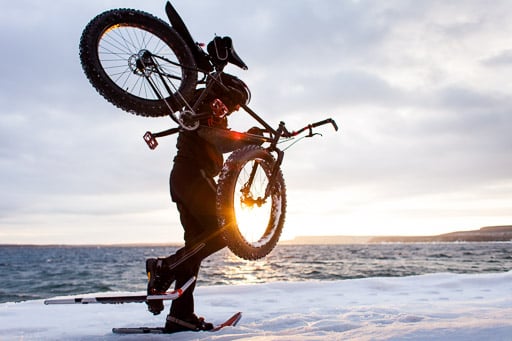 Oh ya – and we checked the weather.

Errrr – except we were at a cottage without internet or cell reception…so by checking the weather, you could more accurately say that we tried to remember what the forecast was from a couple days ago.

As I recall, it was supposed to be cold…and windy.

But not just cold and windy – more like freeze your fingers to your light stand cold and blow the dog off the leash windy.

Hey no problem, adversity is what good photography is all about – if it was easy a million people would have already done it. 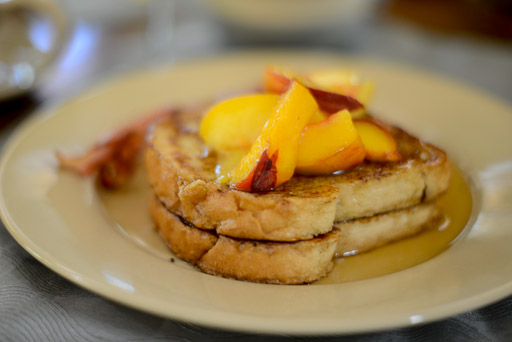 The Sea Was Angry That Day My Friends!

Like an old man, trying to return soup at a deli.

I would like to point out that when I took the following photograph, it was still pretty much dark out and I was laying down on the ice right beside the water. It was so windy and so cold that the wind kept blowing the spray from the waves right into my face – which instantly froze on my lens, which I had to clean off after every shot.

(That is a long winded way of saying that I am not particularly happy with this photo – the strobe should have been on the left not the right, but there was a very angry lake on the left and it took a lot of work to make so I’m sticking with it.) 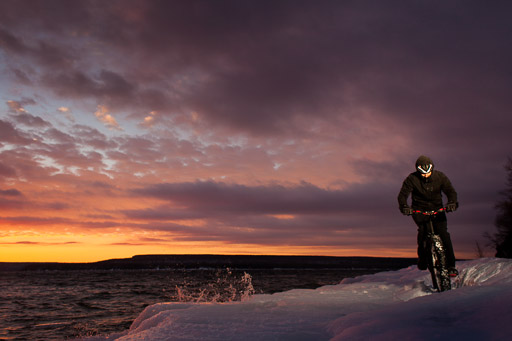 After we had the sunrise fat bike photos in the can, we packed up and snowshoed a little further down the beach. 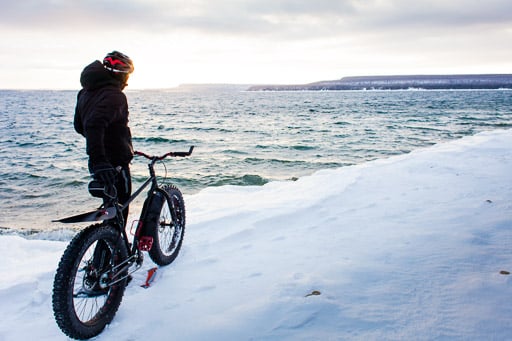 About five minutes after a bright beautiful sunrise, the sun promptly went behind a thick layer of cloud, not to be seen again for three days.

With its untimely disappearance, the sun took all of the bright beautiful sun flare photos that I was planning on making, and instead left me with just dull gray winter cloud.

Again, I would like to point out that creating bright beautiful sun flare photos was pretty much the only reason we were down at the beach for the crack of dawn. The sun only rises in the right direction once a day – but you can take dull boring gray winter cloud photos any time of the day – in particular, after French toast, homemade maple syrup, coffee and Bailey’s.

But, we were there to ride a fat bike – so that’s what we did! 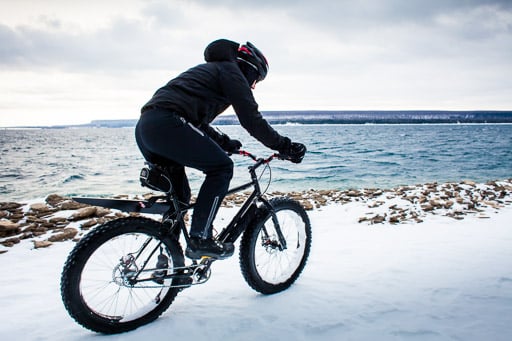 We ended up spending about two hours photographing the fat bike down at the beach. My favorite photos are definitely the handful that I got with the sun before it was swallowed by clouds. However, I am still pretty happy with the rest – you really can’t go wrong with flat winter light.

The first few sunrise shots were photographed with a Nikon SB-800 strobe with a full CTO warming gel, on a lightstand (with the base buried in the snow so that it didn’t blow away).

After the sun came up, I switched to just shooting ambient.

Three things to consider when you are photographing with ambient light outdoors in the winter:

1. You will have to expose your photos at least a full stop, usually two or three stops higher than your camera thinks. Shooting in manual and using the histogram works the best for me.

2. Even if it is dull and cloudy – and you might not notice it to the naked eye – but the light is still directional. Pay attention to the direction of the light and frame your shots to take advantage of directional light as you would if it was bright and sunny.

3. The sun hangs pretty low in the sky all day (at least if you’re shooting far enough north). The huge bonus to that is you get what looks similar to nice early evening light pretty much all day.

(Check out this awesome article for more winter and snow photography tips.) 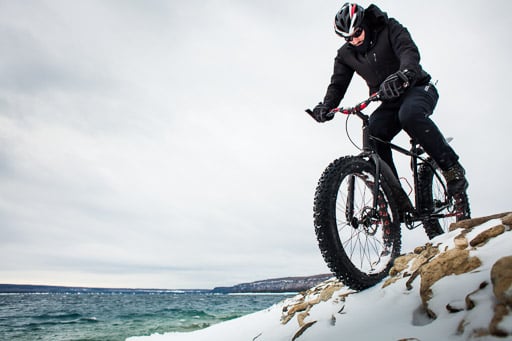 Despite the cold and the wind, it was a lot of fun – and in case you are wondering – yes, riding a mountain bike, (even one designed for it) in the snow is somewhat difficult. 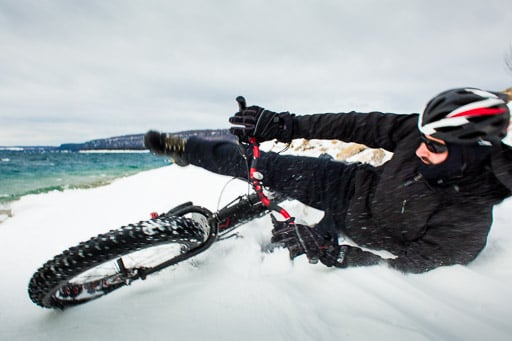 In the end, I think challenging weather makes for much more interesting photography than smooth sailing – which was the whole point of this shoot.

Of course, the best part of the shoot was still getting back to a toasty warm fire up at the cottage…and the French toast and coffee that was waiting for us (thanks honey – I’m sorry I said all those bad things about you).

What Challenging Weather Conditions Have You Faced?

Leave a comment below and let us know how you dealt with bad weather during a photography session. 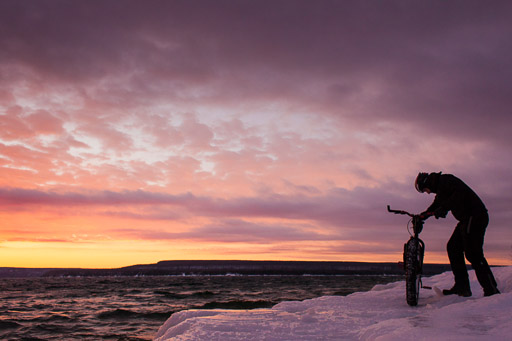