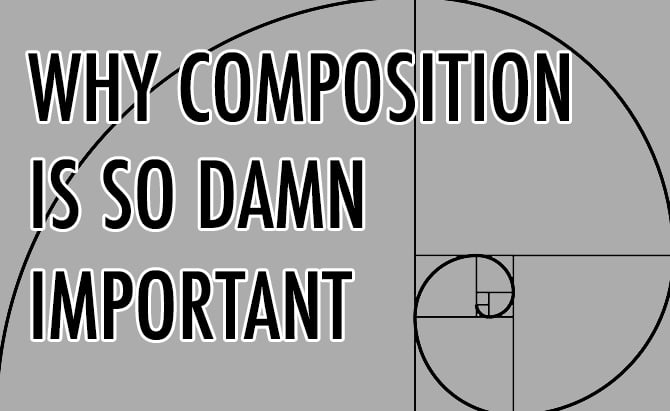 It’s easy to pick just about any photography-related topic– exposure, lighting, etc.– and make the claim that it is the most important element of photography. By extension, that bold statement would mean that the element in question would also be the most important step to taking better photos. The truth is, though, that all of the components come into play each and every time we bring the camera to our eye. We continue, however, to give more weight to some than to others. Sometimes it’s because we’re learning something new, while other situations may be dictated by the subject or surroundings. For me, though, that quintessential element is composition. If the composition fails, the entire image fails. Now, I can already hear feathers being ruffled. Some of you are already scrolling down to the comments section to remind me that without proper exposure, composition becomes irrelevant. The reason I totally disagree is that I am confident in your ability to assess a scene and dial in the right aperture, shutter speed, and ISO. But telling your story– creating a photo that truly speaks for itself within the four corners of the frame– that’s a process that separates a photo that works from one that doesn’t.

Composition Is Not Just About What’s in the Frame.

Composition at its most basic is the arrangement of visual elements within the frame. The frame is your window on the world. Composition is where you point it. Just like a written or musical composition, how you choose to compose a photograph dictates your vision and how you want your viewer to react. The most basic goal of composition is to direct the viewer’s attention. By making conscious (or sometimes subconscious) decisions about what to include, we also make decisions about what to exclude from the frame. Obviously, there are no right or wrong decisions. Simply put, composition answers two questions. The first is, “What are you trying to say?” and the second is, “What made you stop and take this photo in the first place?”

Since you’re not only showing your work to your family, you have to get used to the idea that the rest of the world doesn’t see your work the same way as you see it. They aren’t privy to the back story. They don’t know that you were depressed, happy, angry, tired, hungry, frustrated, or in some other happy/dark place when you took the photo. All they have is the image you composed and captured in the frame. While it’s true that every picture tells a story, that picture has to be able to tell the story without help from you. Creating a more interesting or visually compelling composition will do wonders for communicating your vision.

What separates your photos from the gazillion others that are posted on line every minute of every day? It’s most likely not your mastery of your camera’s many buttons, dials, and menus. It’s your presentation. It’s not what you’ve captured, but how you’ve chosen to capture it and why. It’s important to realize and remember that how we perceive visual information doesn’t change just because the photographer– if given a chance– can explain why he or she did something a certain way. Is the subject anchored to both foreground and background? Are there leading lines to guide the viewer through the frame? Are the important elements dead center, or did the photographer observe the Rule of Thirds? These are only a few of the conscious and subconscious factors at play when the viewer is deciding whether your photo is worth a second look.

One of the things I stress over and over again my photography classes is the need to truly see the entire frame before clicking the shutter. Are trees, columns, poles, or horizons cutting through or springing forth from a subject’s head? Are there distracting elements in the background? Does shifting the camera angle or moving my feet in any given direction solve or prevent these issues?  These are mistakes that can often be resolved in post processing, but learning to resolve them in the camera from a compositional standpoint is so much easier– especially if it’s a fix as simple as moving your feet. Time saved by getting it right in the camera is time you won’t be stuck in front of the warm glow of a computer screen deleting problem images or trying to fix them. It all comes down to making deliberate choices about what’s in the frame and where it is placed.

Things like the subject, foreground, and background elements are usually pretty straight forward. Don’t forget, though, that anything that has an impact on the appearance of those physical elements is also a compositional element. This is where things like camera height, camera angle, distance to subject, etc., come into play. Remember, though, that non-tangibles also have their place when considering composition. Elements like light, color, and shadow are just as important to the overall makeup of the final image. I may not be a big fan of lens flare, but there’s no denying its popularity in outdoor portrait photography. Since the presence or absence of lens flare is dictated by something as basic as the angle of the camera relative to the sun– along with the fact that you choose whether to include it or not– there is no question about its status as a compositional element. Learning to look for the less obvious elements will help you see the potential for a great photo in virtually any scene.

Composition Helps You Find Your Style…And Your Confidence

Over time our compositional approach is going to become second nature. This is a good thing, particularly from an efficiency standpoint. It’s nice to know you’re covering all your bases without necessarily running down a checklist or having an entire conversation with yourself inside your head while your client is patiently waiting for you to start shooting. This is where your personal style will begin to emerge and your confidence will flourish. The things you shoot, how you shoot them, and where you place them all put you firmly in the driver’s seat. The one word of caution I would offer here is to not let style and second nature turn into predictability. 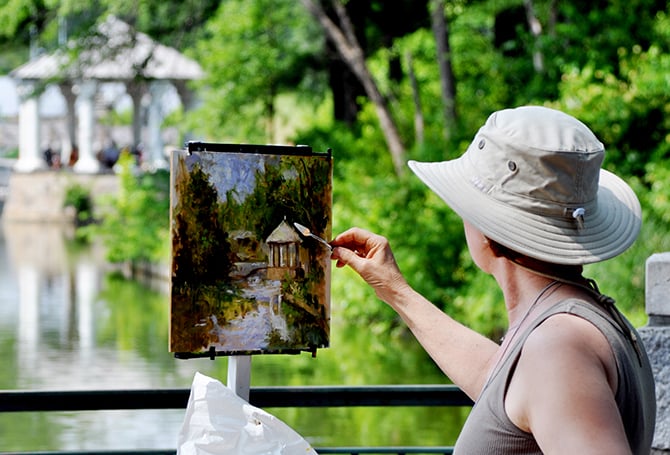 This first example with the painter is a classic example of directing the viewer’s eye through the frame without necessarily capturing actual leading lines. If you start from the right side of the image, your eye is drawn from right to left and on a diagonal to the upper left corner. Using elements within the frame, an almost perfectly straight line could be drawn from the artist’s elbow, through her own canvas, and across the actual gazebo serving as her reference. Looking back on it now, this photo would probably have benefited from me shifting slightly to my left, removing the overlap of the canvas and the gazebo. 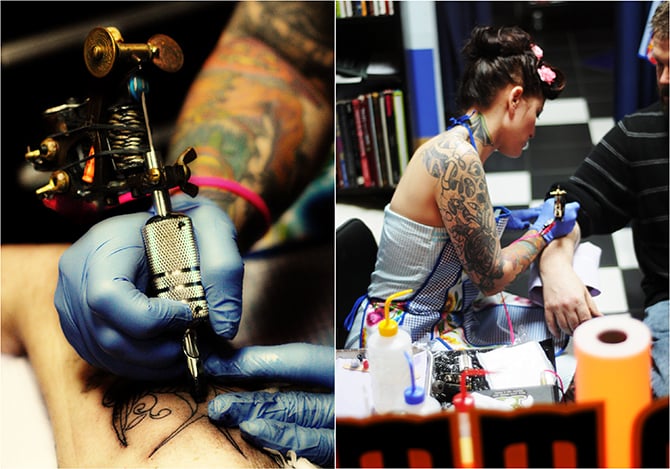 In this second example, the images seem to be telling the same story. If you didn’t have the benefit of the wide-angle composition on the right, however, it would be just another set of hands giving someone just another tattoo. While I really like the image on the left for its detail and color, I think the one on the right has more of a tale to tell. As discussed earlier, composition is your way of telling the viewer what you found interesting about the scene in front of you. 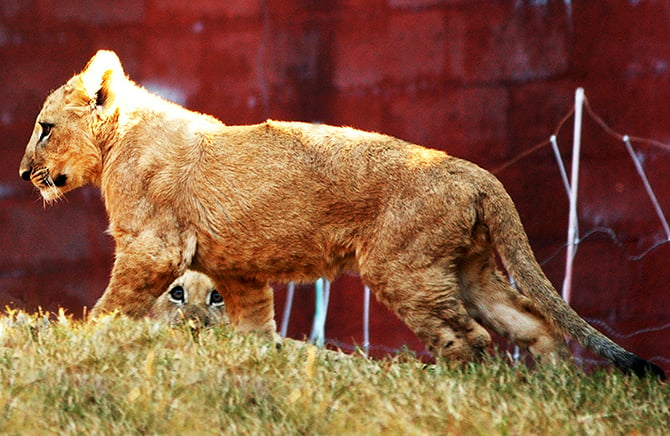 Remember when I said that sometimes just a slight shift in camera height or angle could be enough to completely change your composition? This shot of the lion cub is just such an example. When I was standing straight and shooting from eye-level, all I saw was the cub. Noticing some movement behind him, though, I bent my knees and suddenly his watchful mother joined the shot. That one small change in camera position completely changed the image for the better. 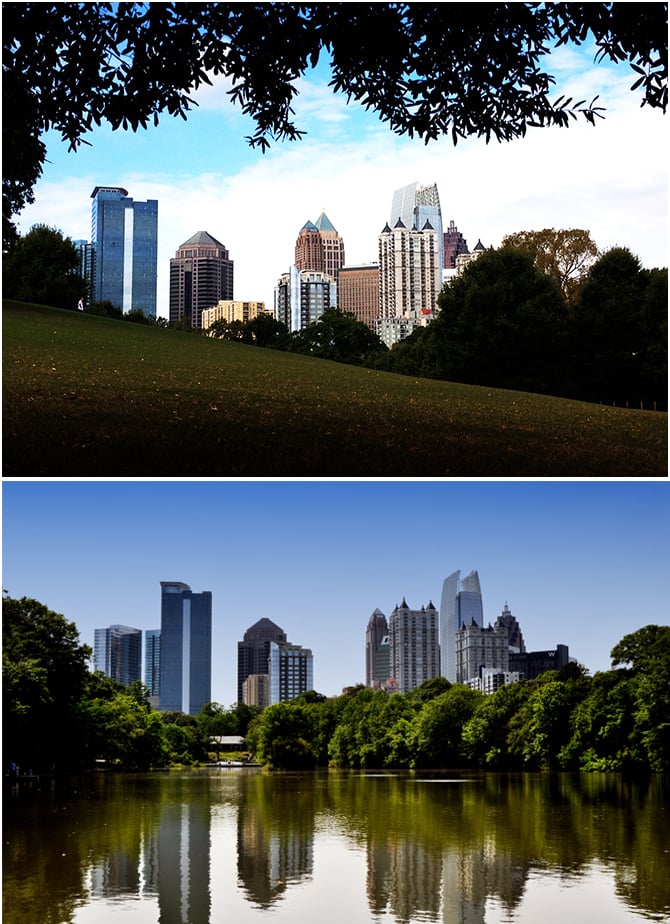 I’m a sucker for skyline shots, and Piedmont Park in Atlanta has countless vantage points from which to capture the midtown skyline. These two images were taken approximately 100 yards apart, yet essentially show the same segment of the skyline. What I really like about each of them are the strong foreground elements– the trees across the top of the first image, and the reflection across the bottom of the second. Many photographers tend to ignore the foreground. That’s not always a bad thing, but looking for strong foreground elements adds a whole new dimension to your images. 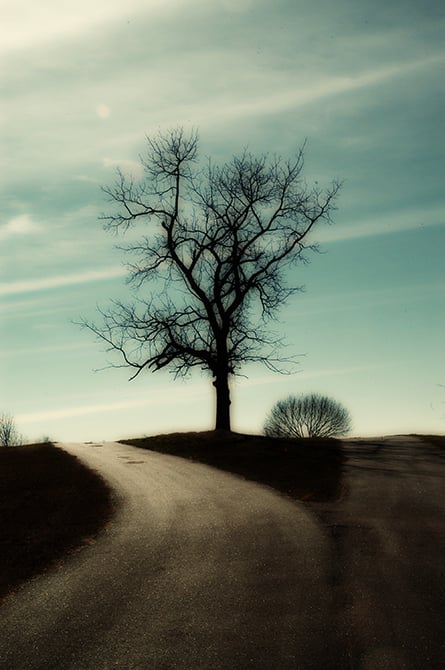 I’ve photographed this tree from the same spot in all four seasons, and this is by far my favorite version. I’ve composed it several different ways, including one in which the tree pretty much fills the frame on its own. For me, though, it becomes far more interesting when the camera pulls back. As fascinated as I am by the tree itself, it becomes so much more when placed in the context of the fork in the road. While I can’t control the appearance of the sky, composing tightly on the tree would have eliminated most of what was an incredibly interesting sky. This was from my first encounter with this tree, which could be one of the main reasons it resonates so strongly with me.

I once heard Joe McNally say that the definition of a great photo is one that causes the viewer to stop and take a second look. When you think about how bombarded we are with photographs on any given day, it’s no surprise that the number of images that make us stop what we’re doing and take a second look– the ones that take our breath away– can be a pretty small number indeed.

That’s why composition is so damn important.

All photos are Copyright Guyer Photography. All rights reserved.

Lighting vs. composition: Which one is more important?

Why empathy is the most important trait of a wedding photographer

Why negative space is important in photography

« Realism: The Role Photography Plays in CGI on the Big Screen
Sony’s New Announcements: Pricing for the a7S, and a New Compact Camera »