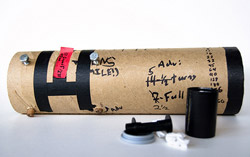 Flickr user Some Guy (Art) as bored at work, we do sometimes. So instead of going to the cooler and catching the latest on American Idol or having another go at that darn level of angry birds he built a camera from trash.

Pulling a MacGyver, the camera was build from a machine core (AKA big toilet paper core) and a multi-tool.

Here is how the story starts, with a few necessary omissions:

“One day, while at my last job, I was sitting around watching my line, getting bored. … In my bordedom, … I tactfully wasted that time twiddling my thumbs. Eventually this tired me too, so I went … and got a core that was destined to go in the dumpster. When I say core, think cardboard toilet paper tube on steroids. It’s 1/4” thick cardboard tube with an inner diameter of about 3″…It’s practically structural tubing.

I took out my multi-tool and started to bore a hole in it with the leather punch. …

Then the idea hit me like a ton of bricks. I WOULD MAKE THIS PIECE OF GARBAGE INTO A CAMERA. I told everybody that I would do so, and nobody believed me.

That night I went home and got a 3/8″ wooden dowel, 4 1/4x20x1.5 NF Hex head bolts, an old film can, an old roll of fuji superia that I wasn’t going to use, some super glue, my drill bits, and a good roll of TMax 100. I also printed out a sheet of reciprocity failure characteristics for the TMax.” …

And here are two sample pictures taken with this TP camera.

Art’s Cameruh! from Some Guy (Art)

« Build A Motorized Slider With A Pen (And A Bunch Of Other Stuff)
What’s Your Prime Perspective? »