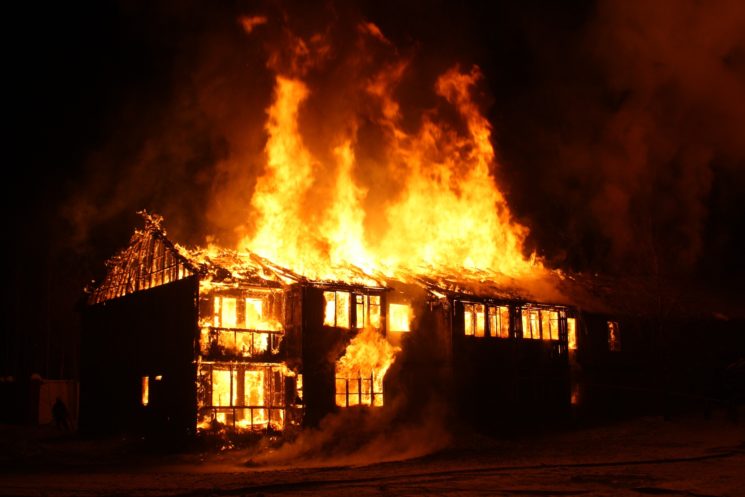 If you make a living from photography, losing the photos you shot is not only your loss. When something unpredictable happens, it’s your clients who lose their precious memories, too. One very strange case recently got under the spotlight: a photographer’s house burnt down, and the fire destroyed all photos from a wedding he’d previously shot. So, he’s delivering anything to his clients, but also not giving them a full refund. He reportedly offered a 90% refund because of the time he invested in shooting and editing the photos.

The post was originally published on Reddit’s AmItheAsshole subreddit. The client writes that he and his wife hired the photographer to shoot their wedding for $2,000. However, the photographer contacted them after the event to tell them that his house was burnt down. He apologized and told the couple that he wouldn’t be able to deliver the wedding photos as the files were destroyed.

“I snooped on his social media profiles to double-check that this was true and not just an excuse,” the man writes. And as it turned out, the photographer was telling the truth.

“He posted pictures of the burnt-down house. He also posted that he has homeowner’s insurance that will cover it, and has posted some pics of him staying at his sister’s, so, fortunately he isn’t on the street or totally screwed. Still a pretty shitty situation, though.”

However, the catch is that the photographer offered the couple a 90% refund ($1,800) instead of the full $2,000 one. According to the post, he said that it was because “huge amount of time he put into editing, the 5 hours he spent shooting at the wedding, and the hour-and-a-half round trip he drove to shoot.”

“I’m not trying to sound too selfish or entitled, but while I think it’s all well and good he put all that work into it, all that doesn’t really benefit us if we’re not getting a single photo out of it, and I don’t see why we owe him anything. It’s sad and not his fault (IDK, maybe he could have saved an extra hard drive somewhere not his house), but we’re not getting our long-awaited & treasured pics, and I feel we deserve the full refund.”

The client adds that he demanded the full refund, but the photographer has stood very firm that he’s only giving the 90% refund. Because of this, the man says he’s even prepared to take the photographer to small claims or request a chargeback if he doesn’t back down.

Basically, the man who wrote the post was wondering if he was the a**hole for requesting a full refund. He received a lot of positive feedback, and many people believe that he has a right to the entire amount. The post was later cross-posted to Photography subreddit, where the comments are pretty much the same. Most people believe that the couple is indeed entitled to a full refund because they didn’t actually get a single photo of the wedding.

Many commenters emphasized the need for a good backup strategy. It’s definitely something all photographers should have developed, especially if they make a living from photography. A lot of people believe that it was photographer’s mistake that he didn’t back up the files on a cloud, and that it’s not the clients’ fault if the fire destroyed the SD cards or a hard drive where the photos were stored.

Personally, my first thought was that I empathize with the photographer. It’s a huge loss and stress to have your house destroyed in a fire, even if the damage is covered by the insurance. I can only imagine how difficult it must be for him and his family.

Still, if I observe the case without emotions and empathy, purely from the practical, rational side, I tend to stand with the clients. No matter the circumstances that caused the loss of all photos, I think that they are entitled to a full refund. Also, I believe that it doesn’t matter how much time the photographer spent traveling, shooting and editing photos if the clients didn’t receive a single one of them.

If I were in this client’s situation, I can’t say for sure what I would do. It’s sometimes difficult for me to draw a clear line between emotional and rational response. What would you do? Would you empathize with the photographer’s situation and accept the 90% refund, or you’d request a full refund?

Wedding Photographer Loses Over 2000 Photos After Car Was Broken Into – What Would You Do?