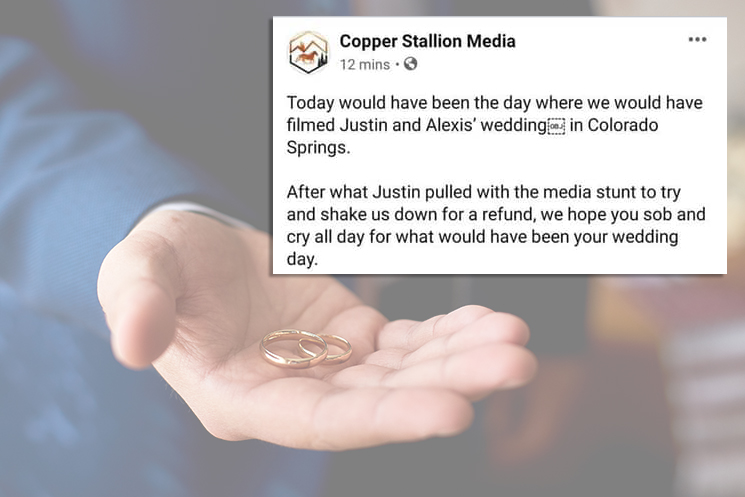 We’ve heard of nightmare photographers before, but here’s one of the most bizarre story I’ve heard so far. Three months before he was supposed to get married, Justin Montney’s fiancée suddenly died. Since the wedding was not going to take place, he asked the wedding videographer for a refund. But what he got was public bullying, “Life’s a b**ch, Justin” and “We hope you sob and cry all day for what would have been your wedding day.”

Justin’s bride-to-be, Alexis, tragically lost her life to a car accident in February this year. The wedding was supposed to take place on 23 May, and Justin had reportedly paid $1,800 upfront for video services. After the tragedy, he reached out to Copper Stallion Media, the company that was supposed to film the event. He told KRDO that he sent multiple requests, but the company kept refusing to give him or Alexis’ family a refund. They even told him that they could “extend his service to his next wedding,” as Justin told Denver 7.

In an interview with Denver 7, Justin said that the contract he signed said that his payment was non-refundable. However, he believes that the company should honor his request considering that the circumstances were beyond his control. After his requests were allegedly rejected multiple times, he left negative reviews on Copper Stallion Media’s The Knot page. This led to other people leaving them negative feedback on social media. And this is where it got messy.

Copper Stallion Media redirected its business website and Yelp page to justinmontneywedding.com and justinmontney.com. Multiple sources write that they kept posting details of the case, including emails, media coverage, voice messages and so on. At the time of writing this, both domains only feature a YouTube clip of Disillusioned, a song by A Perfect Circle. Per FStoppers, this is one of the posts that were on the website before A Perfect Circle took over:

“Justin Montney then contacted the failing news station, KRDO in Colorado Springs, CO to tell his story. In the news story he admits that the contract was non-refundable but says we should give the money back due to the circumstance. Life is a bitch, Justin.”

“Today would have been the day where we would have filmed Justin and Alexis’ wedding. After what Justin pulled with the media stunt to try and shake us down for a refund we hope you sob and cry all day for what would have been your wedding day.”

The post is now deleted, but Kennzie Duncan managed to save a screenshot. “This ‘company’ deleted their Facebook page after posting THIS and are suing the Justin for defamation,” she writes.

– Please share this post to help bring a bright light to this situation! -I cannot even express in words how angry I…

But wait, there’s more. Alex Murphy, a former employee at Copper Stallion Media, revealed some details about the company. Speaking to Denver 7, he said that he worked for them as a videographer in 2019. He says he found the job on Craigslist, but left the company because they refused to pay him.

When he got his final paycheck, it was nearly three months since he quit, Alex told Denver 7. Even when he did get it, it came from Organized Weddings, LLC and a Las Vegas address: and Copper Stallion Media is based in Texas.

But there’s even more. In a Reddit post, other folks shared their experiences with Copper Stallion Media. The company appears to be connected with Organized Weddings, LLC, which is linked to Jesse J. Clark. Back in 2013, he was sued by the Massachusetts Attorney General for scamming 90 couples. He reportedly took the money and never delivered any videos.